For those unaware, PocketWizard has not yet updated the firmware for their MiniTT1 and FlexTT5 system to be fully compatible with the Canon 5D Mark III.

Since I just acquired the Canon 5D Mark III and use the PocketWizard TT1/TT5 system in conjunction with the PocketWizard AC3 ZoneController (as well as the PowerMC2 and AC9) with my Paul C Buff studio strobes (Einstein and Alien Bees), this is an issue for me. 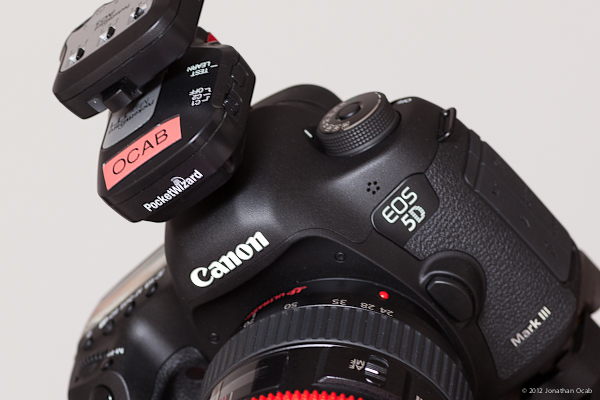 There are a lot of reports on the Internet right now from people using the TT1/TT5 on a Canon 5D Mark III, but I never got around to testing the triggers on my own 5D Mark III body.

So today I took a few minutes and was able to determine that the TT1+AC3 will work on a Canon 5D Mark III to do the remote flash output control (controlling power output using the AC3 dials) with the Einstein and PowerMC2.

The TT1+AC3 appears to *NOT* work when trying to trigger or control the flash output of an Alien Bees B1600 with FlexTT5+AC9.

The interesting thing I found is that I was able to trigger the B1600 with FlexTT5 connected via mono-sync cable from the TT1 over ControlTL channels *IF* the AC3 Zone Controller was piggy backed on it. Without the AC3 on the TT1, it would not trigger the B1600+TT5 (mono-sync) over ControlTL channels, and only would trigger over Standard channels (which is how you would normally be forced to trigger a studio strobe since they don’t understand TTL signals).

The MiniTT1+AC3 will trigger a Canon 580 EX II SpeedLite with a FlexTT5, but does not appear to control the flash output.

So basically, if you use Einsteins with PowerMC2 receivers, you will still be able to control remote flash power output with the TT1+AC3 on a Canon 5D Mark III. All Alien Bees with TT5+AC9 and 580 EX II with TT5 will not respond to AC3 ZoneController adjustments.