I picked up a few Hamilton timepieces in the past 12 or so months to accessorize my wardrobe, and began eyeing some higher tier watches. After much research and weighing of options, I settled on the Omega Seamaster 300m Chronometer reference number 2220.80.00, also known as the James Bond watch. 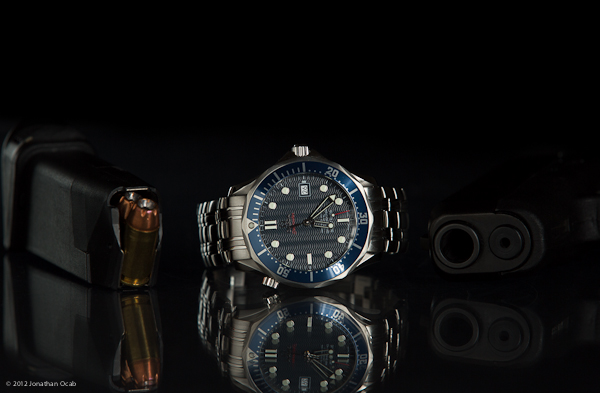 This particular Seamaster style was used in the 007 films from GoldenEye through Casino Royale with changes along the way (Quartz to Automatic movement, etc), with the 2220.80.00 being used in Casino Royale.

While I do like Hamilton Watches for their solid cost to quality ratio, I desired a more luxurious watch and revisited Omega Watches. I thought about a Tag Heuer, but the history and recognition of Omega drew me in, especially with their iconic Speedmaster and Seamaster lines. I began looking at the Seamaster Planet Ocean 2201.50.00 with the black dial and black bezel, and the Speedmaster Professional Moonwatch 3573.50.00 (same as the 3570.50.00, but with Sapphire Crystal instead of Hesalite).

Let it be known that I was never really a fan of dive watches at first. But after a while, I began to appreciate the simplicity of a dive watch’s appearance. A dive bezel frames the dial well and makes for quick reading of a watch.

The longer I pondered between the Planet Ocean and the Moonwatch, I realized how much I wanted the cleaner look of a dive watch over the chronograph dial. But as I began to sway more towards the Seamaster, I started looking at the 300m with it’s classic blue dial / blue bezel styling. While the “black goes with everything” rule plays out a lot, I felt the blue actually made more sense to “go with everything” in that it’s subtle enough not to clash with any colors of clothes, yet strong enough to stand out and separate itself from the clothing.

Then as I looked more at the 2220.80.00, I realized how classic the design and that it would retain it’s appeal forever. 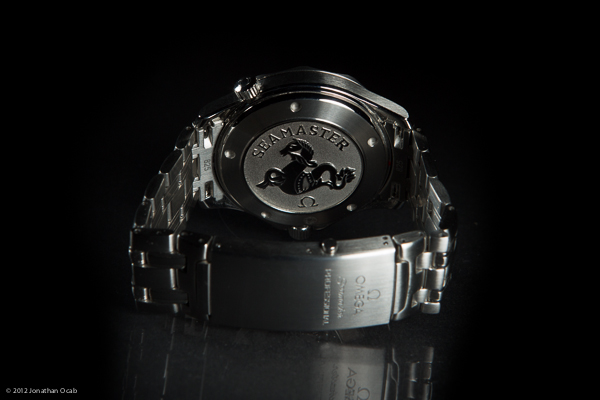 That is why I ended up acquiring the Omega Seamaster 300m Chronometer and ever since I received it I have been in love with it. It’s a great all-around timepiece for the boardroom to the beach, with a suit or with shorts. 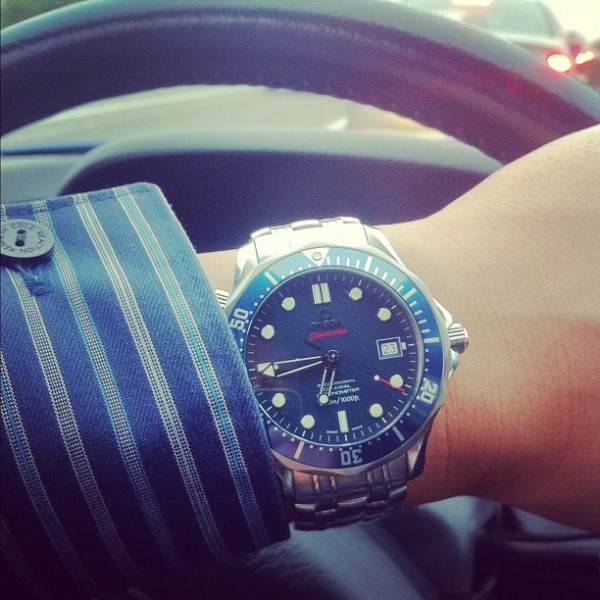 Purists will say that you don’t wear a dive watch with a suit, but that mantra just doesn’t hold for the Seamaster. With a 41mm diameter and a 13mm thickness, it fits well under the cuff even with my 7″ wrist and doesn’t overpower the wrist when it peeks from underneath a suit jacket sleeve.

I have also come to appreciate the quality of the ‘Super-LumiNova’ coating that Omega uses for placing luminescence on the watch dial and hands. It is very intense for the first several minutes in the dark after being ‘charged’, and it fades from maximum brightness very quickly. But the lingering luminescence remains for several hours and makes the watch completely useable in the dark. 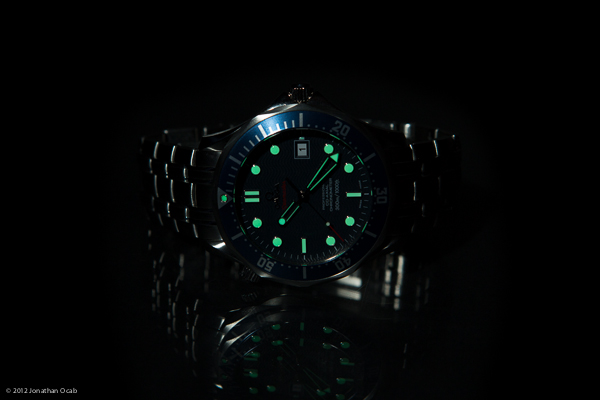 Anyway, that marks my new timepiece acquisition and I’m already pondering my next piece. I’m going to get another Omega, but there are a few I really want. While I still want a Speedmaster, it’s not at the top of my list anymore. I’m pondering a Seamaster Aqua Terra, a De Ville Hour Vision, and a Planet Ocean. But I’ve got plenty of time before I stack the change to buy a new Omega for the collection.