As I began my adventure in the world of portrait photography, I have been acquainted with various strobes and modifiers. But the one that has fascinated me most is the beauty dish (or beauty reflector).

Basically, a beauty dish is a round reflector shaped like a bowl. There is a reflector disc in the center of the dish. The strobe throws light against the disc which in turn bounces into the bowl and then forward. This creates a very round light which is softer than direct bare bulb flash, but harder than a traditional softbox.

The light created from a beauty dish, when used properly, does an excellent job eliminating wrinkles and helps to bring out a person’s skin in a flattering manner.

Currently, I don’t have any studio strobes and have been relying on a pair of Canon 580 EX II Speedlites for my external flash (remotely triggered via PocketWizards). While there’s nothing wrong with Speedlites (they are quite effective as seen in the recent ‘Strobist’ movement), finding quality modifiers for Speedlites is very difficult. Studio strobes like the popular Elinchrom and Alien Bee units have numerous softbox and reflector options.

I was about to order an Alien Bee strobe (and still might), but decided to get the new Paul C. Buff Einstein (currently on backorder) which is manufactured by the makers of Alien Bees. So while the Einstein could take 2-3 months to ship, I really wanted to get a beauty dish.

Coincidentally at the time I was looking at modifier options, Syl Arena appeared on the This Week In Photography podcast (Episode 146: Livin’ Large with Small Strobes) and spoke about his new Canon-centric Speedlite website, speedliting.com. As a Canon shooter, I naturally visited the website and discovered the section on Speedlite modifiers. Low and behold, there was a section on umbrellas, softboxes, and beauty dishes designed for Canon Speedlites.

The speedliting.com page mentioned the Kacey Enterprises Beauty Reflector product and after some perusing of the Kacey website and various independent reviews and write-ups regarding the Kacey dish+adapter, I shelled out the money for one.

The above three items comes out to $330 plus shipping. 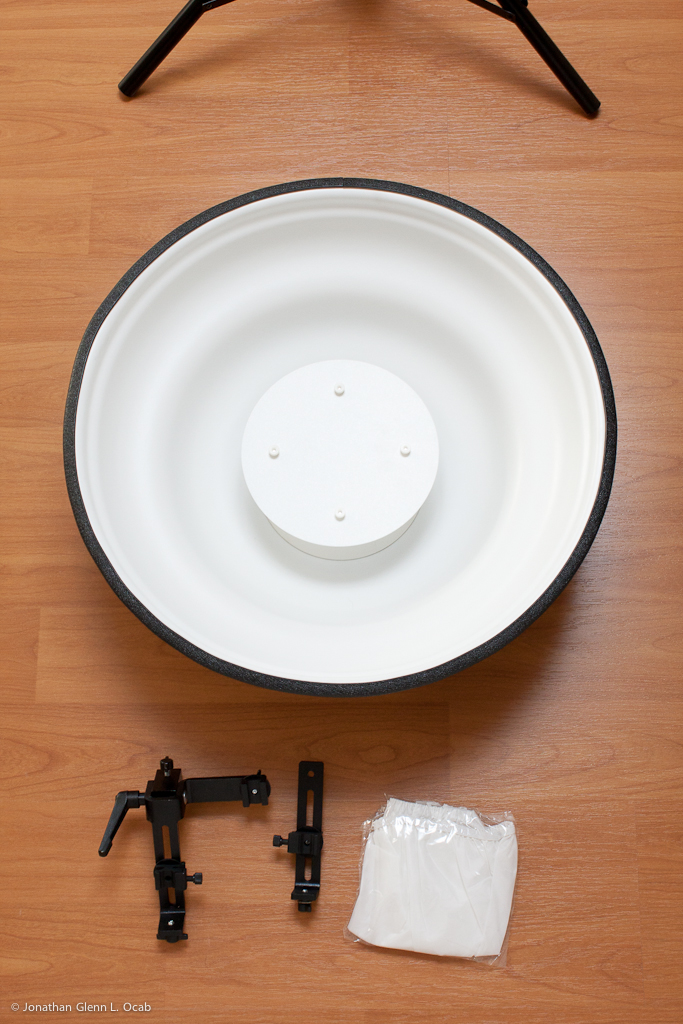 The dish itself is made out of rugged plastic, which is a contrast to other beauty dishes out there, that are made out of some sort of metal (stainless steel, aluminum). The plastic doesn’t lose out to metal, and is actually an improvement in terms of portability. The dish is lighter which helps in transportation to and from location, and aids significantly while maneuvering the dish while on location. 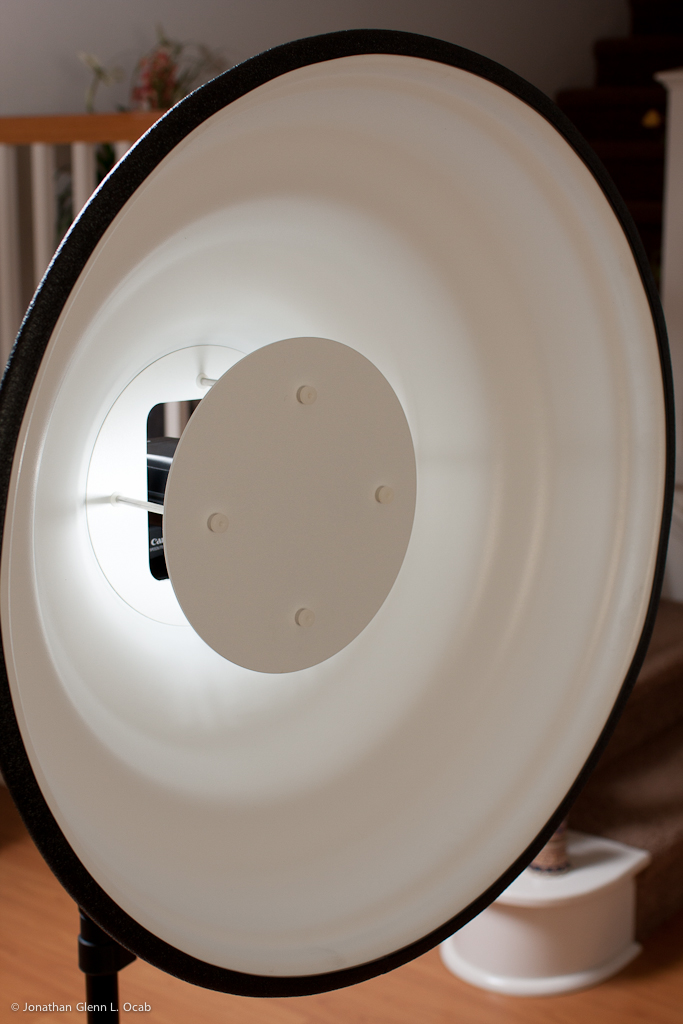 It’s important to know that the Kacey dish is designed to be used with the Kacey bracket/adapter. While there are stories on the net about people manufacturing their own flash brackets, everyone pretty much says the Kacey bracket is far and away a more stable and rugged option to most ‘cheap’ DIY solutions. 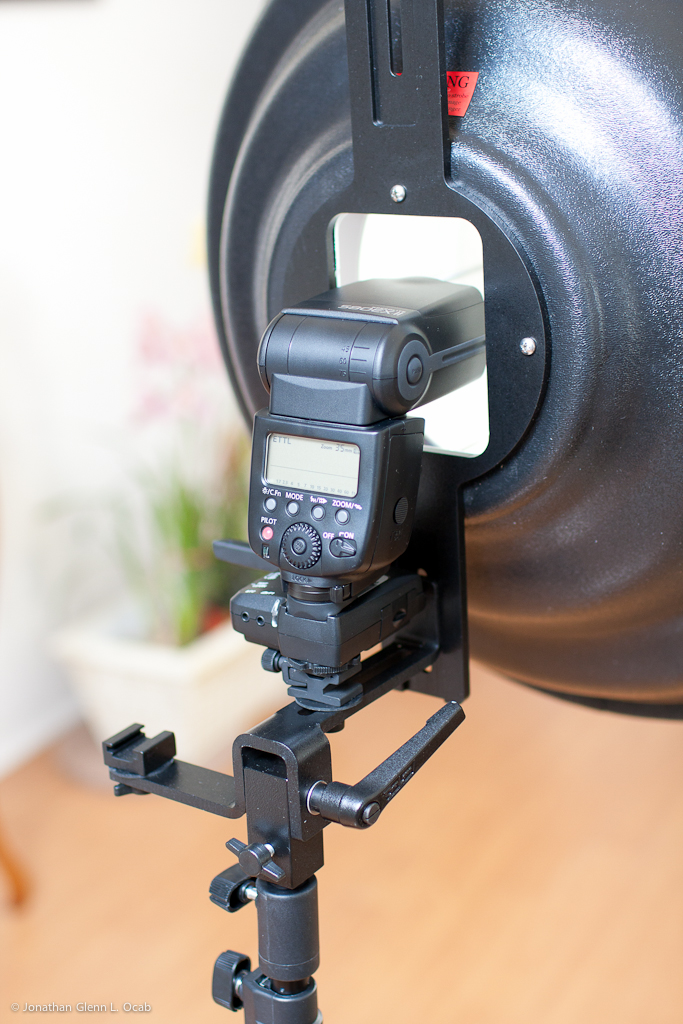 Kacey manufactured the dish and adapter to work with either a single Speedlite or two Speedlites for increased power output if needed. While I didn’t anticipate using the dish with dual flash units, having that versatility for an extra $40 seemed like a good deal. 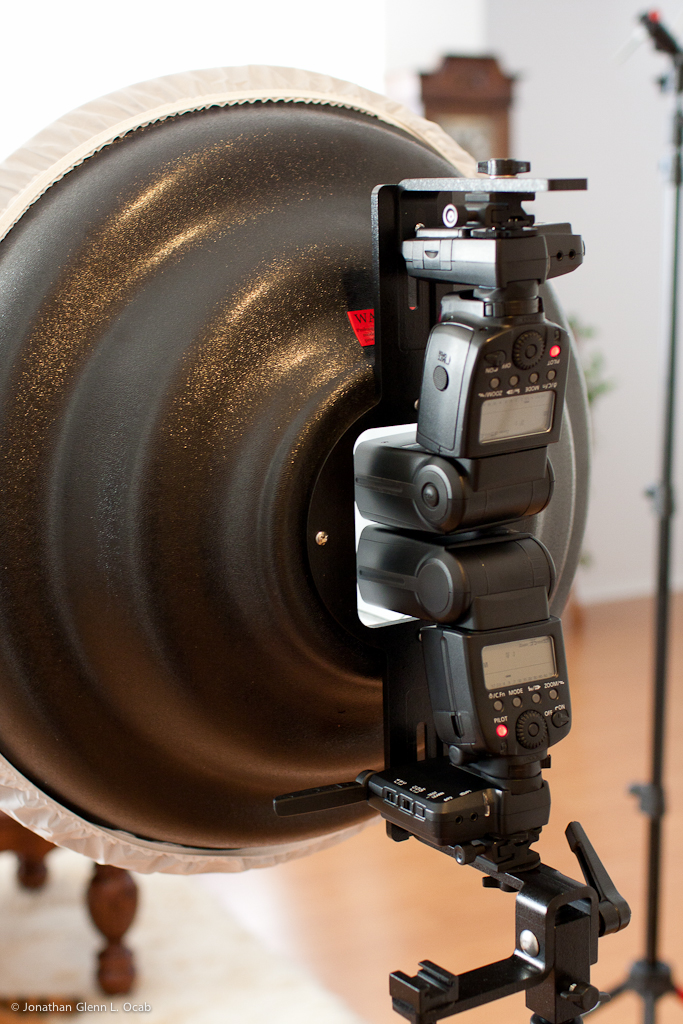 As you can see, the adapter is just tall enough to handle two 580 EX II Speedlites, each with PocketWizard FlexTT5 transceivers.

The bracket itself is fairly rugged, except the swivel that controls the angle of the adapter could be a little better. It does sag a bit once you tighten down the lever. So you sort of have to ‘guesstimate’ the amount of sag that will occur when you set the angle and tighten it down. Also, the cold shoes included with the adapter/bracket actually cock the Speedlites a couple degrees to one side. I ended up using a couple of spare Stroboframe Universal Shoe Mount (adapters) that I had laying around and these are much better (flashes sitting square to the bracket).

All this said, how does the Kacey dish perform? Well, considering I’m still a rookie when it comes to portrait photography, you’ll have to take my opinion with a grain of salt. But I’ve found that the dish works great. Beauty dishes do have a certain sweet spot for the light (2 to 3 feet from the subject) so placement is critical. But when correctly placed with regards to the subject, the results are amazing.

The light cast by the Kacey dish does an excellent job minimizing lines in the skin. The flattering light also has a quick fall off so it doesn’t cause too much shadow behind the subject (as a result of the beauty dish light hitting the subject, and the subject casting a possible shadow).

So given the Kacey beauty dish makes great light, should you buy one? That is actually quite a dilemma. Currently, the Kacey dish is $143 and the bracket is $136/$171 (single/double, respectively). That’s basically $300 for the dish. That is a lot of money considering the Paul C Buff beauty dish is only $80 (which fits Alien Bee strobes).

Well, for one, if you already have an investment in Speedlites, then getting the Kacey setup supplements existing gear. Yes, you could sell a single 580 EX II and go the Alien Bee route. I actually thought about doing this. But what’s holding me back is another reason why the Kacey system is beneficial: High Speed Sync.

I use the PocketWizard MiniTT1/FlexTT5 which allow wireless radio triggering of flash units, but also has E-TTL and High Speed Sync capabilities. That means while studio strobe users are stuck with using their strobes at camera sync speed (typically 1/200 or 1/250sec), I can use my PW and 580 EX II units a high shutter speeds well beyond 1/1000sec.

So I can actually use the Kacey beauty dish with my Speedlite+PW system outdoors in sunlight, and still shoot large apertures (f/2.8).

So the versatility of the Kacey Enterprises Beauty Reflector is definitely there. Whether or not the versatility is worth the cost is up to each individual photographer.

While the Kacey Enterprises solution is a bit pricey compared to an Alien Bee solution, I am still very satisfied with the early results. As I continue shooting more portraits in the near future, the quality of the light provided by the Kacey will become more apparent.

Addendum added 2012-07-19: Only a few months after I wrote this review, I was pretty much using Paul C. Buff strobes instead of Speedlites, so I acquired the PCB speedring adapter for the Kacey dish, and have been using the dish on my Alien Bees / Einstein strobes.