The 2011 SHOT Show came and went without too much fanfare, in my opinion. There were new products, but unlike the 2010 SHOT Show, it didn’t seem as if there was as much buzz at the show this time around.

I think the 2010 SHOW Shot was driven heavily by the height of the AR-15 hysteria. Most manufacturers were newly expanding into the AR-15 platform of firearms, so it seemed like everyone had something ‘significantly’ new with regards to the firearm buying trends at that time.

But this year there wasn’t really an underlying trend driving manufacturers’ new offerings. This of course, isn’t necessarily a bad thing. It’s simply the nature of the industry.

That said, while I did not feel overly impressed by the 2011 SHOT Show as a whole, I did find a few products worthy of note.

The new product that impressed me the most is the Kel-Tec KSG. 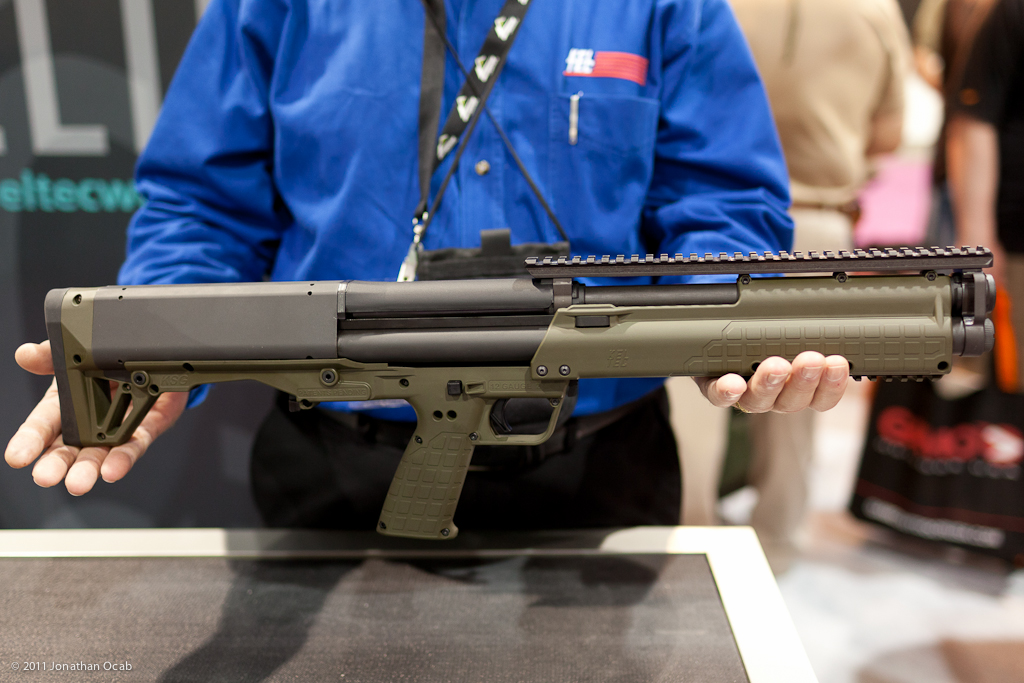 The KSG is a 26.1″ overall length shotgun with an 18.5″ barrel in a bullpup design. Aside from the impressive form factor, what is more unique with this new shotgun is the dual magazine tubes. Yes, it has two magazine tubes with 7 rounds capacity each (12 gauge, 2-3/4″ shells). The operator can select which tube feeds the chamber by using a lever. Thus, the operator can load different shell types in either tube to account for varying situations.

But with the KSG, I would load one tube with #00 buckshot and the other tube with rifled slugs and simply switch levers and operate the action to load the necessary shell.

The one concern that I and my fellow Californians have regarding the KSG is whether or not it will be legal in the State of California due to the capacity of the shotgun as a whole. Theoretically, the KSG has a 14 shell capacity, but the magazines are two separate magazine tubes of 7 shells each. In California, magazines are restricted to a ten-round maximum capacity. So technically, each tube is only 7-rounds max, which is still legal. But if the California Department of Justice Firearms Division decides that the two 7-round magazine tubes constitute one single 14-round magazine, the KSG will not be legal for sale in California. Hopefully Kel-Tec will get a favorable ruling by the CA DoJ and the KSG can be sold in California.

The MSRP is currently $880. A bit pricey for a pump-action shotgun, but assuming the quality control is solid, the KSG will undoubtedly sell a lot of units all over the country.

The next product of note that I discovered at this year’s SHOT Show is Aimpoint’s new red dot sight: the Patrol Rifle Optic, or PRO. 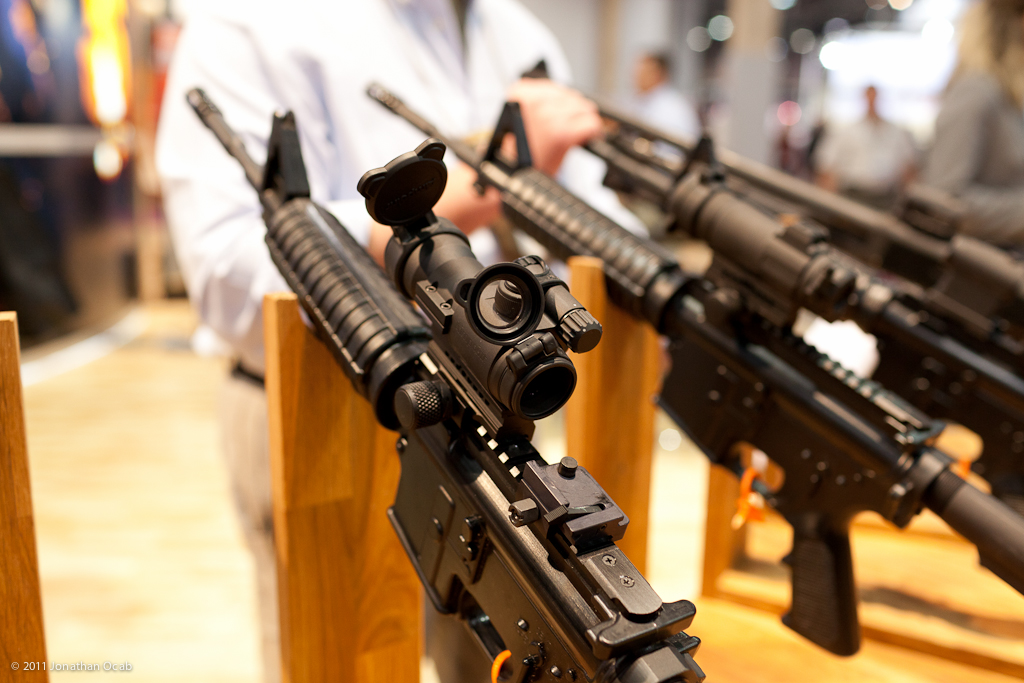 Unfortunately, all of the Aimpoint representatives at the Aimpoint booth were not familiar with the product at all because, as I was told, they were just informed of the PRO at the beginning of the SHOT Show. But basically, the PRO was made to provide a red dot sight at a lower price point for smaller law enforcement agencies who may not be able to afford Aimpoint’s flagship red dot sights.

I inquired as to what Aimpoint had to do in order to cut the costs on the PRO, but couldn’t get any definitive answers. 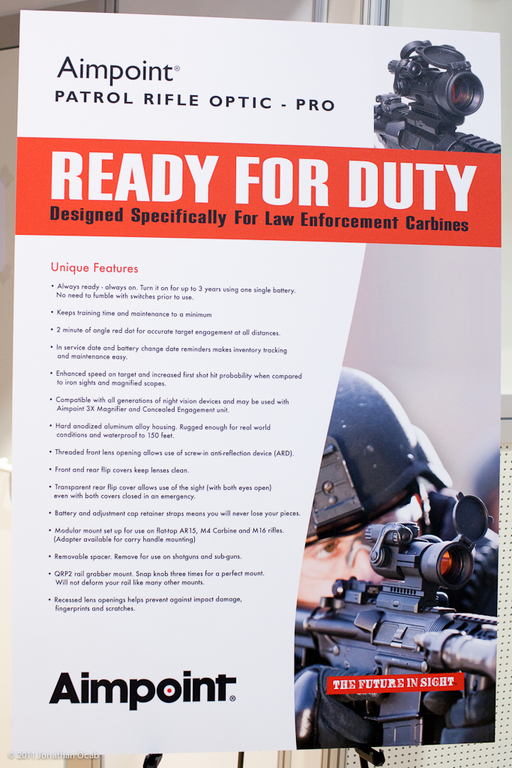 From what I could ascertain from the Aimpoint representatives, the PRO has the same body as the Comp M4 and is night vision and magnifier compatible.

That said, hopefully Aimpoint will release more details regarding the PRO the general public in the near future. I anticipate that the PRO will be a popular product assuming Aimpoint can produce a quality red dot on par with the Comp M2/M4 at around a $300 street price.

While details of the Barrett MRAD were already made public a few months prior to this year’s SHOT Show, it was still one of the sexiest products on the show floor. 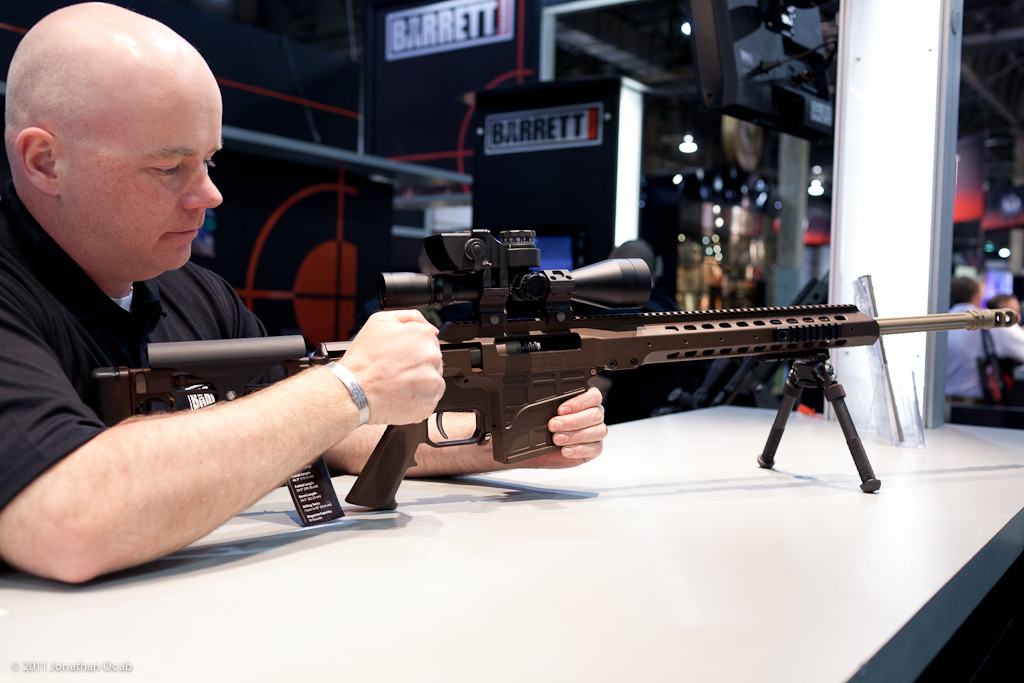 The form factor of the MRAD is very much like an M-16/AR-15, and it actually uses M-16 grips. The MRAD is a bolt action rifle, with a folding stock for increased portability. The barrel has a proprietary front loading design which allows for operator barrel interchangeability. Chambered in .338 Lapua Magnum and with 10-round removable magazines, the MRAD is an imposing long-range sniper weapon system. List price is $6000 and ETA to market is mid-2011.

For those not aware, Surefire has entered the magazine market and announced 60 and 100-round magazines for the M-16/AR-15. 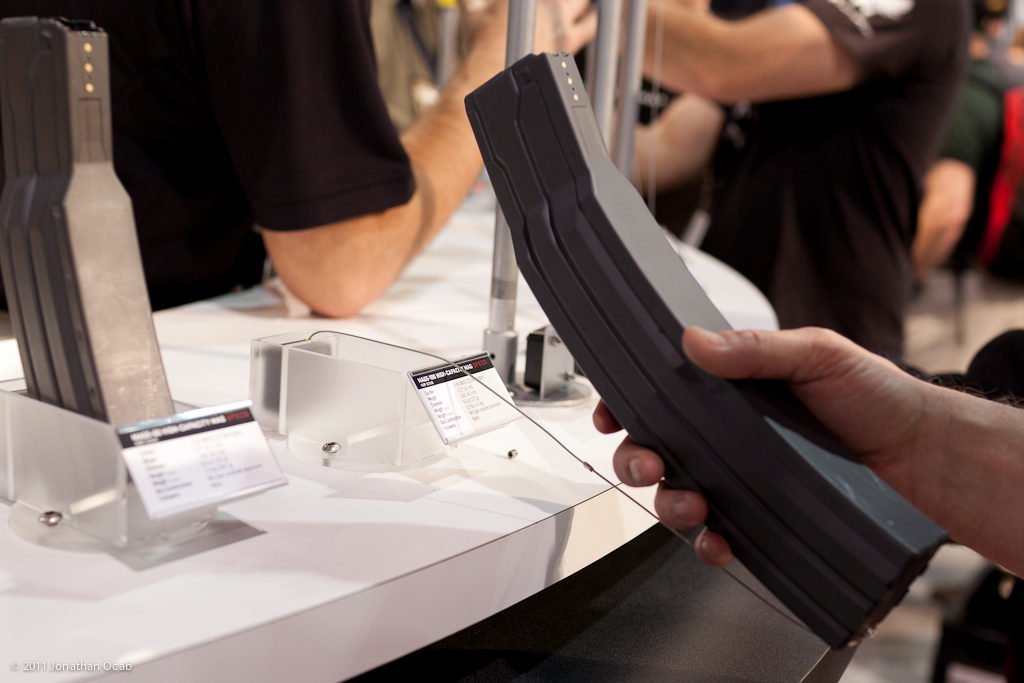 Not much to say about this except that assuming the product performs as demonstrated in the Surefire demo video above, operators now have a quality ‘high-capacity’ (greater than 30-rounds) magazine for the M-16/AR-16.

Aside from those few products that caught my eye, it was pretty much standard fare at 2011 SHOT Show. It was packed as usual. Lots of stuff happening on the show floor including autograph signings (e.g. R. Lee Ermey) and professional shooters providing tips and advice. 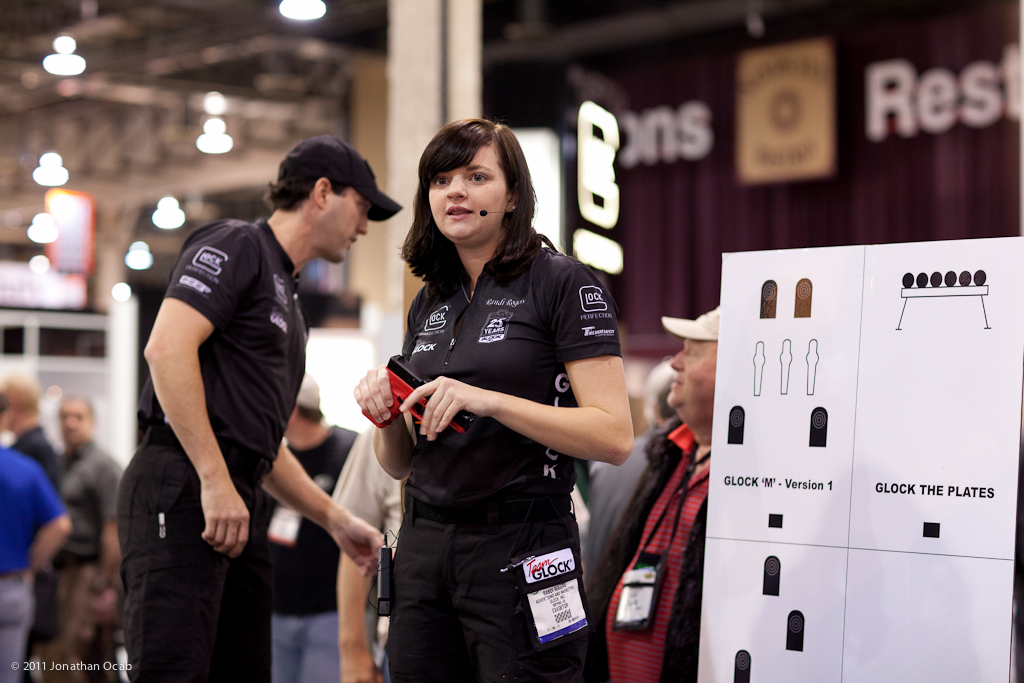 Special thanks to Randi Rogers of Team Glock for giving me some advice on faster sight reset (and for the free Glock hat; woot!). She’s a far better pistol shooter than I am, so any advice she has for me can’t hurt.

Smith and Wesson had their “big 3” (Julie Goloski Golob, Doug Koenig, and Jerry Miculek) present at the show. 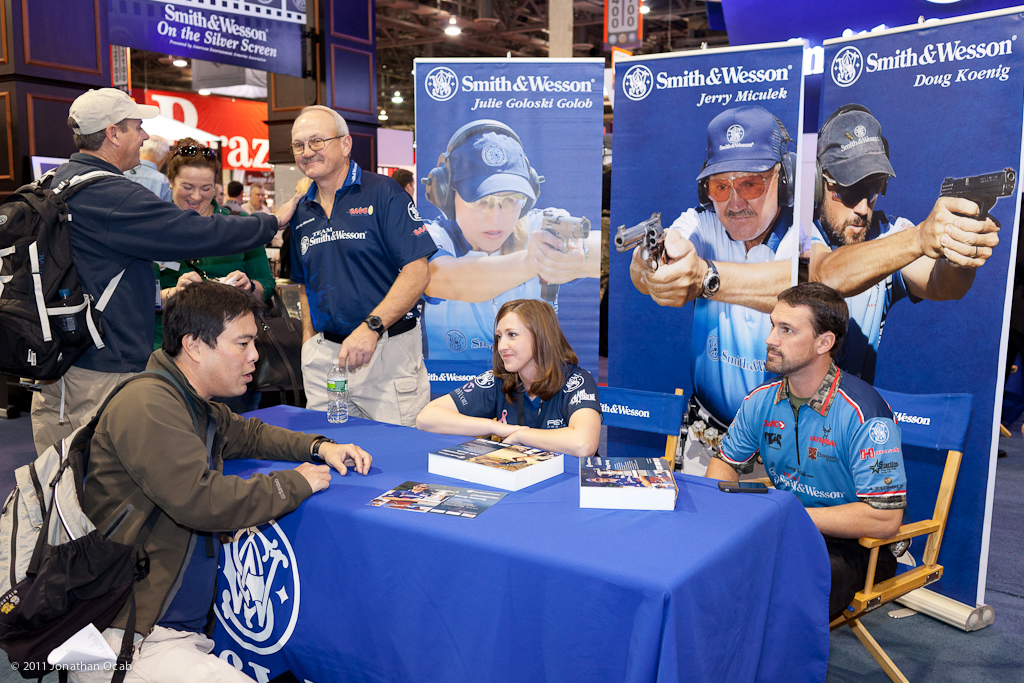 As far as press and media presence at 2011 SHOT Show, the NSSF reported over 2,000 press attendees, which is the most they’ve had in previous years. With all the press present, coverage of the SHOW Show is pretty much going to be thorough for anyone not able to go. I anticipate that in future SHOT Show events, the amount of press will continue to be high, though press/media reporters will be more focused on specific areas rather than trying to cover everything. 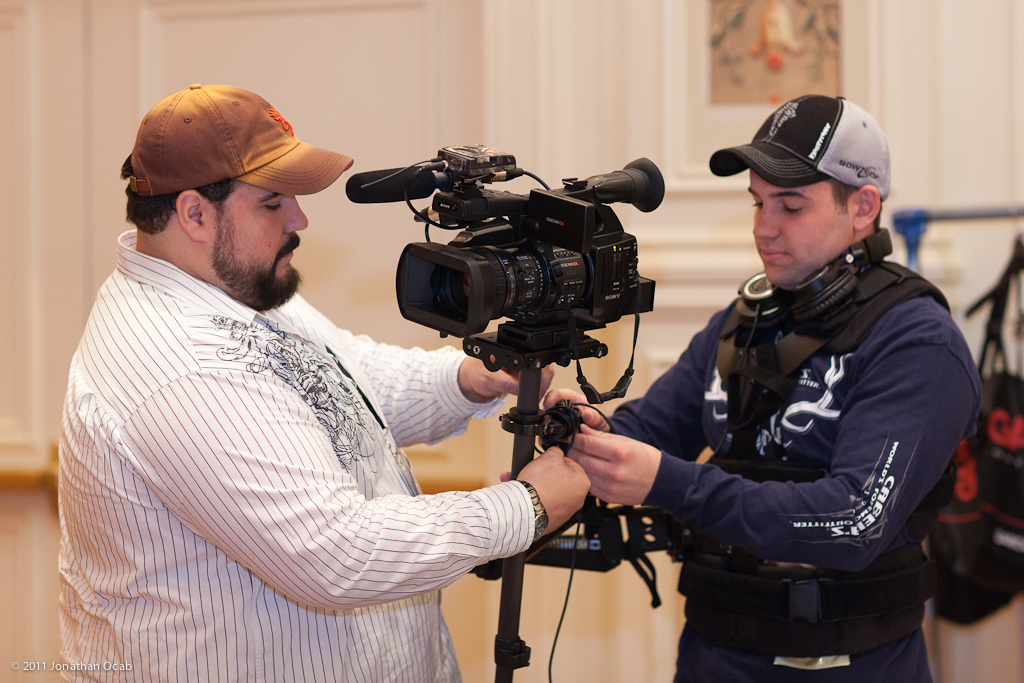 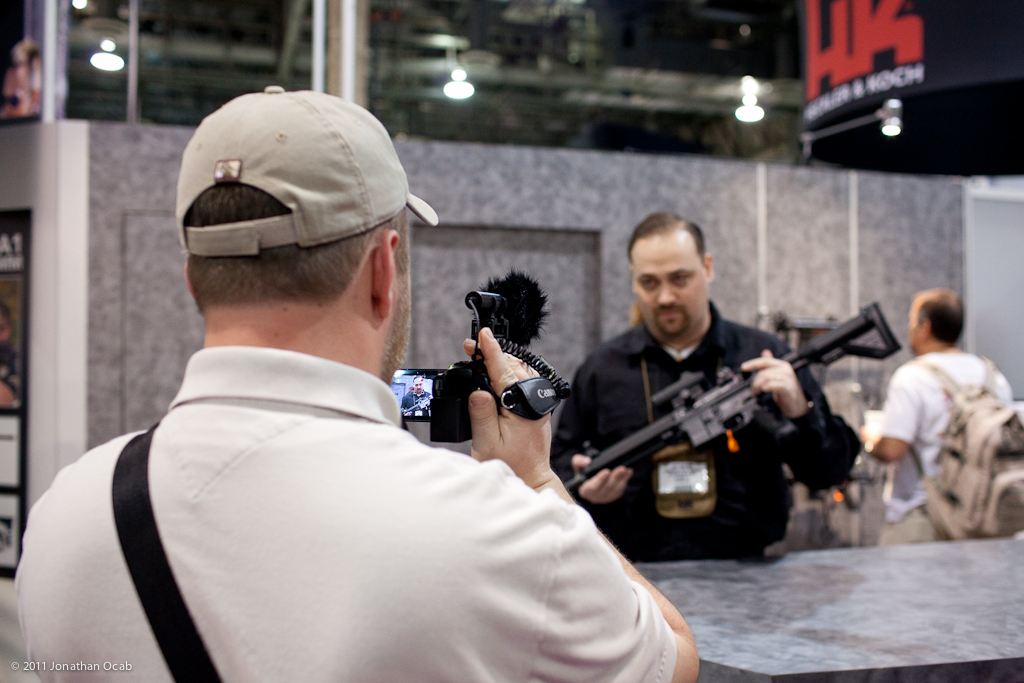 Anyway, that’s my short personal take on the 2011 SHOT Show. Again, the media presence at 2011 SHOT Show was high, so if you Google for “2011 SHOT Show”, there should be plenty of information out there on the web if I wasn’t able to satisfy your firearms information cravings.

If anything, check out the 230grain.com blog (http://230grain.com/) which has full 4-day coverage of the show floor. Special shout-out to Donald Norwood of 230grain.com who I ran into and conversed with at this year’s show.

I’ll close out this article with a shot of a couple girls from the United Kingdom promoting for the Crye Precision booth. 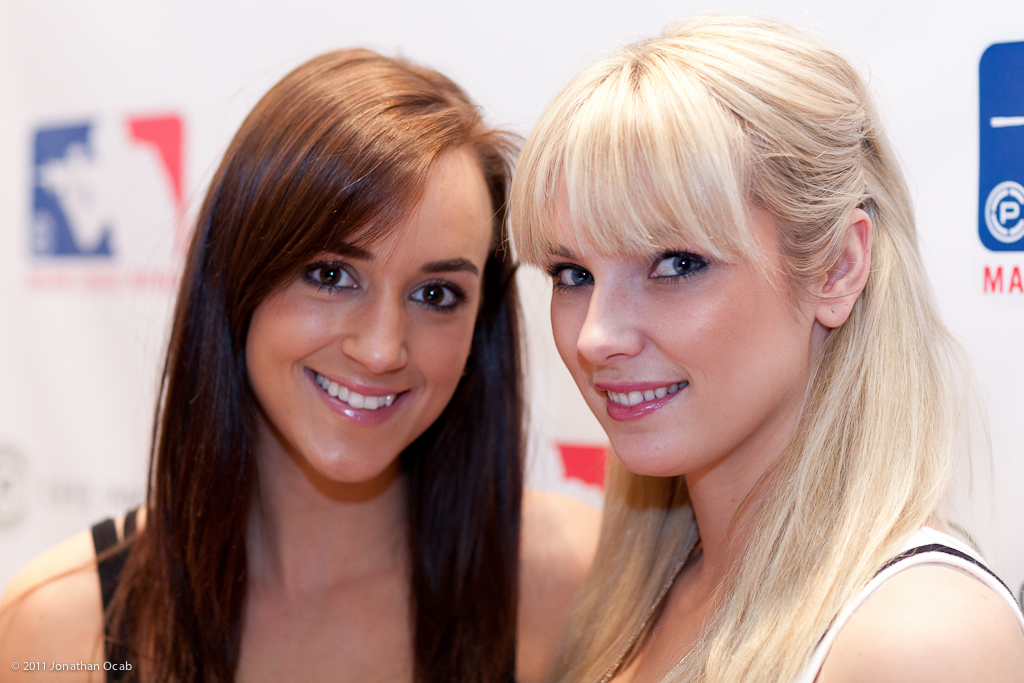 Equipment note: I ended up going light this year and covered the floor with a single camera body (Canon 5D Mark II) and the Canon EF 35mm f/1.4L and Canon EF 85mm f/1.2L II lenses and a 580 EX II Speedlite. Carried the 5D Mark II on the Black Rapid RS4 strap and used the Think Tank Photo Steroid Speed Belt and some modular pouches to hold my lenses and flash.