I have become a fan of the Blue Force Gear Vickers Combat Application Sling (VCAS) ever since I acquired one a couple months ago. Ever since I have been using it, I have experimented with the sling mount points and changed the mount points trying to find the best solution for me.

When I first started using the sling, I was running the sling mounted to the rifle on the points of the handguard and stock closest to the receiver, respectively. This was about as close to running a single point sling while running a 2-point, in terms of rifle manipulation. But you lose a lot of the stability with the rifle in the carry / rest (hanging) position.

So I tried running the sling mounted far to the rear on the stock on the left side (traditional side for a right-handed shooter), and the front sling mount still close the receiver. This was more stable while in the carry / rest position, but not much more and felt a bit awkward while manipulating the rifle during shooting.

Then I went ahead and started using the front sling mount the farthest forward point on the handguard for my specific 16″ mid-length AR-15 platform. I put the Noveske Keymod QD Direct Attach sling mount on the 45 degree section of the Bravo Company KMR handguard (0730 position) due to the Haley Strategic Thorntail Keymod light mount and Surefire P2X Fury Defender combo I have mounted on the KMR at the 0900 position. 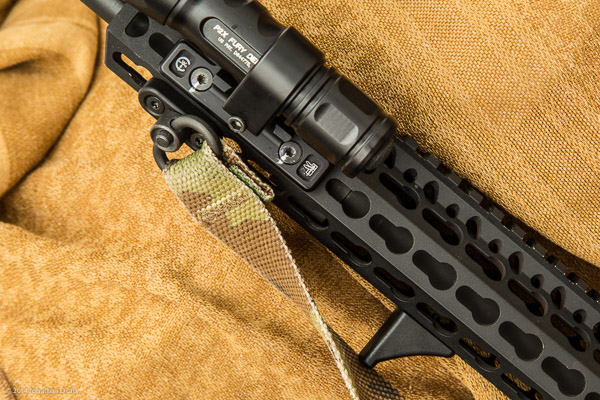 Running the VCAS mounted to the far points of the rifle proved to be very stable in a carry / rest position with the rifle hanging on the chest (muzzle down) or hanging on the back (muzzle up). Rifle manipulation required getting used to because my reaction arm would meet some resistance from the sling during reload, but with sling adjustments, this was mitigated.

My one problem with running the sling far forward and far rearward, with the rear sling mount on the left side (traditional side for a right-handed shooter) of the stock is that during shoulder transitions, the sling would wrap around my neck and would often constrict the neck. The sling would end up getting in between the buttplate and the shoulder/deltoid when the left shoulder mounting took place after the shoulder transition.

I thought about this issue and figured that the best way to mitigate this would try to use a rear sling point on the right side of the stock. This way, the sling wouldn’t get caught in-between the buttplate and the shoulder creating more tension/constriction of the sling around the neck after a shoulder transition.

I purchased an additional QD cup (Magpul Type 2 QD Sling mount – MAG332) for the Magpul UBR which is meant to make the stock ‘ambidextrous’ for sling mounting. 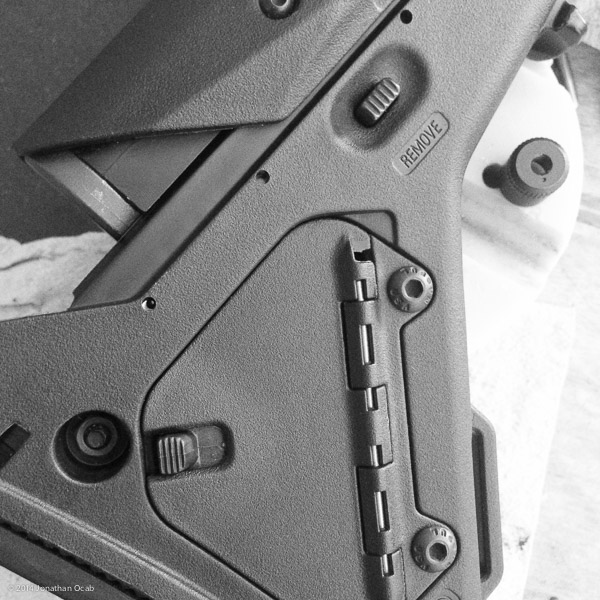 Technically, I could have simply reversed the existing sling cup on the UBR, but I wanted to keep the sling mount on the left side in the event I needed it, and figured the optional QD cup accessory for the UBR stock would be ideal. 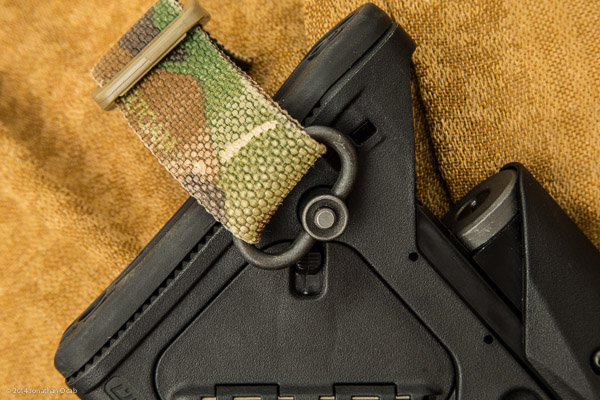 After I installed the MAG332 Magpul Type 2 QD sling mount for the UBR and mount the VCAS to that point on the stock, I tested shoulder transitions and they were much better. The sling still technically does wrap somewhat around the neck on a shoulder transition, but there is little to no constriction and I still maintain the maximized stability of the two-point sling with the sling mounted on the far ends of rifle.

So this is how I am now running the Blue Force Gear Vickers Combat Application Sling (VCAS), otherwise known as a Vickers sling. If you own one a two-point sling of any type, particularly mounted using QD sling mounts, give my mounting method a whirl to see how it works for you. You might find it works well for you.