I frequently come across someone posting on a firearms web forum who is having difficulty sighting in a rifle. Invariably, someone will respond with, “Get a laser bore sighting tool,” and every time I cringe.

Why? Laser bore sighting tools are pretty much unnecessary a majority of the time.

In recent years, tools using lasers have been created such that a laser can be pointed out the barrel of a firearm onto a target, and the sighting system can be lined up with the laser. But this is meant as an aid, and is NOT a definitive and completed “bore sighting” of a firearm and its sighting system. You still need to fine-tune the sights with live fire.

The concept of a laser bore sighting tool is fine as an aid, but there is a simpler method of bore sighting which falls in line with the true nature of the term.

This is basic bore sighting and this is accomplishing without the need of a laser tool.

You can save even more time doing this procedure if you do steps 1 through 5 outlined above while at home before you head to the range. Setup a black circle at the end of the longest hallway in your home and bore sight on from the other end.

Before continuing, it should be obvious the above method will not work on a select few types of firearms, such as a M14 variant, M1 Garand, Mini-14, Ruger 10/22, or any other semi-automatic rifle where the operator cannot look down the bore of rifle from the chamber/breech end. In which case, the best method is to set the sights to mechanical windage zero and test fire on an extremely close target (e.g. 15 yards) to dial it in.

But one may ask, “Isn’t a laser tool going to be more accurate than by using the naked eye?” Not necessarily. Laser bore sight tools are not truly ‘precision’ tools. There are many out there, but they all have inherent inaccuracies due to variances in bores, rifling, and variances in the machining of the tool.

Even if I were to concede that a laser bore sight tool is more accurate than the human eye method, it’s still not going to be dead on exact. As I mentioned before, you still need to live fire test to ensure you are on paper and to fine tune the no-wind zero and work on an elevation zero.

Here’s my a recent break-in session on a new rifle where I also took the opportunity to adjust the brand new, freshly mounted Aimpoint Micro T-1 2MOA with a Larue Tactical LT660 mount.

Note that I took the upper receiver off of the lower receiver, removed the bolt carrier group, and rested the upper such that I aligned the bore and Aimpoint optic with the target black of a target board I placed out 25 yards away.

Due to range logistics that morning, I could only use a bay that went out to 25 yards.

First, I maneuver upper on the rest (bags) so the bore aligns with the target black. 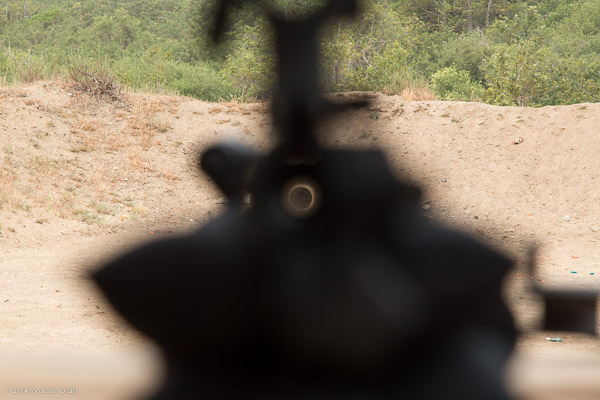 Next, I adjust the Aimpoint so the dot is on the target. 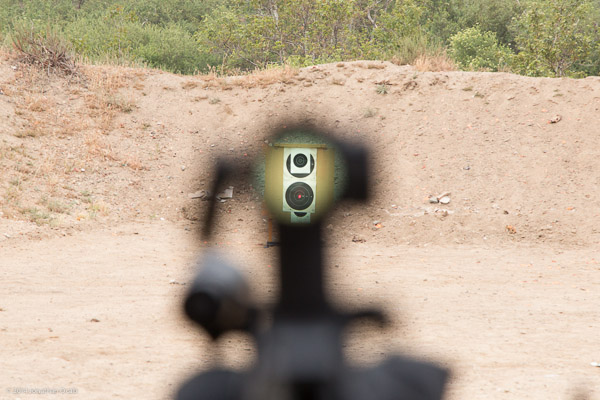 I then confirm that both the bore and the dot are on the target black simultaneously before reassembling the gun.

After I lined up the bore and the Aimpoint, I took an initial shot, which happened to be the very first round through the gun. I then broke the rifle down for a quick bore cleaning. I then took note of the POI of the first shot which happened to hit right of center with a respectable elevation, so I dialed in several clicks left. After I finished cleaning the bore, I took the second shot. 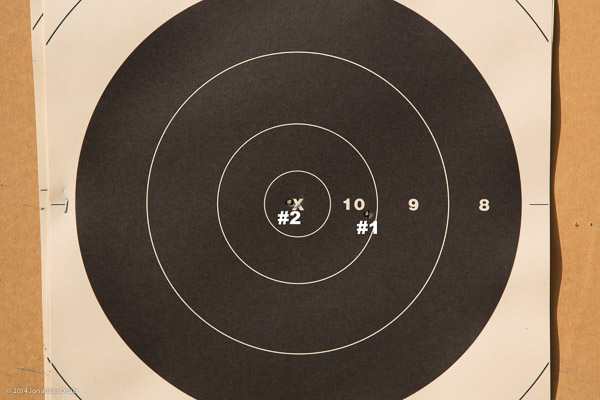 As you can see in the above photo, my ‘eyeball’ bore sighting got me on paper at 25 yards, respectably close to center, and a quick windage adjustment got me a fairly decent no-wind windage zero.

After that, I shot a few more three round groups during my chronograph testing to confirm the no-wind windage zero, and adjust the elevation POI a little. I wanted a lower POI versus POA at 25 yards since it will get me closer to a 50/200 yard zero for when I get a chance to confirm the elevation zero at 200 yards.

That’s pretty much it. Now I can be fairly confident that I can take this rifle to 50 yards, 100 yards, etc., my no-wind windage should be fine, and I only need to adjust my elevation as desired.

In summary, I demonstrated how you can bore sight your rifle without a laser bore sighting tool, be on paper at 25 yards (and be pretty close to center). Then after that, ideally you only need one more shot to get centered up and perhaps a few more rounds to confirm.