A couple of days ago Canon finally announced the EOS 60D, the successor to the 50D and the next iteration of Canon’s 10D series of cameras. There are plenty of other blog postings with opinions of the 60D, and tons of threads on various camera and photography forums arguing the pros and cons of Canon’s latest dSLR offering.

That said, I felt like ‘voicing’ my own thoughts and opinions of the 60D.

For one, I just want to establish the fact that this camera is not a 7D replacement. I’ve read tons of complaints on the Internet about how the 7D is a far better camera than the 60D. Well, yes, in general the 7D is the better body. But the 60D isn’t the successor to the 7D. The 60D is the successor to the 50D.

So with the 60D, what does the Canon dSLR field look like now?

We currently have in order from lowest to highest (price/class):

Note that technically the XS, T1i, and 50D are still in production, the XSi, T2i, and 60D are thought of as their successors (with prices very close to their predecessors). So I have excluded them from the above list since the above list are the logical considerations in the Canon family for consumers.

It seems like Canon’s EOS line of dSLR cameras is fairly sound and each step up in class hinges a lot on the compromise/balance between the respective camera’s AF, metering, and video capabilities.

With the new 60D, all of the latest revisions in each class of Canon’s dSLR family has HD video recording capability except the XSi (entry level).

The T2i is very popular among professional film makers because it will shoot 1080p 24/25/30fps just like the 7D. But the price point is a lot lower because it’s still photo capabilities are still in the entry-level Canon ‘Rebel’ class. 9 basic AF points (center cross-point), but with 63 zone metering, and a relatively slow 3.7 fps still frame rate.

The 7D is a very capable APS-C sensor camera for both stills and video, with a 19-point all-cross point AF, 63 zone metering, and 8 fps still frame rate.

So the 60D, the latest iteration of the 10D series, does fill a stop gap between the T2i, which is an excellent HD recording device and an ‘entry level’ still camera, and the 7D which is an all out great still and video APS-C hybrid dSLR.

The above obviously shows that the 60D is a worthy choice over the T2i for photographers who need a little more oomph from their camera.

But why the 60D instead of the 7D? Well, for one the 7D has an MSRP $600 more than the 60D. So a prospective buyer may want to save $600 if (s)he doesn’t need the AF and burst rate capabilities of the 7D (19 point all cross-point and 8 fps). Who would this be? Someone who shoots portraiture perhaps. If all you do is shoot a lot of portraits and very little sports, then the 60D is a far better choice than the 7D.

I think the 60D is a worthy iteration of Canon’s 10D-series of dSLR cameras. If anything, I think the articulating is going to be a selling point for those who like to use live view. 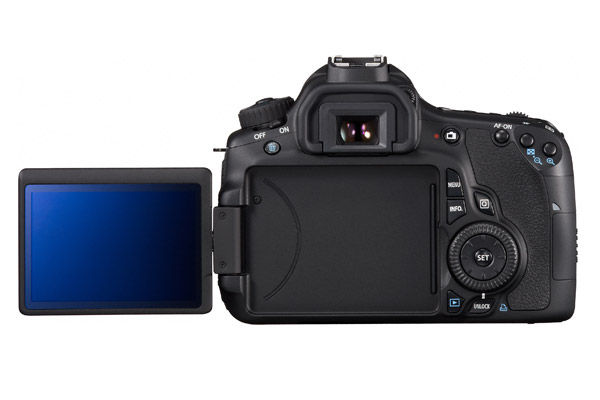 I did find it interesting that Canon has changed the media format of the 10D series from CompactFlash to SD/SDHC/SDXC with the 60D (50D and predecessors all used CompactFlash. Those with an earlier 10D-series camera who want to upgrade to the 60D will be forced to get new media.

As far as what a person should buy (particularly a new dSLR purchaser), T2i vs 60D vs 7D, pick based on your needs and budget.

And even if you can afford the 7D (or 5D Mark II), if you don’t need the 7D’s AF capabilities, then why not just go 60D and spend the $600 on glass? A lot of people spend way too much trying to justify which body to get, without considering what lenses they’ll be getting for their camera.

Adorama already has the Canon 60D listed in their catalog and is accepting pre-orders at the $1099 MSRP (body only).

Lastly, for those wondering, no, I’m not going to get a 60D. I already run the 5D Mark II and 7D. My current photography equipment needs are in lights (more strobes via Paul C. Buff) and lenses (looking to get the Canon EF 24-105 f/4L IS next).