I finally got around to getting some backup iron sights (BUIS) for my 16″ AR-15 build by acquiring a set of Knight’s Armament Company (KAC) Micro sights.

The core design of the AR-15 rifle had the rear sight integrated into the upper receiver (within the carry handle) and a front sight was attached to the gas block on the barrel. By and large, this design was standard for the US military in the M-16 variants up until the M-16A4 (early 2000’s) which had a removable carry handle.

Around the early 2000’s, so-called flat-top AR-15 rifles (with no carry handle / rear sight) became predominate in the market. Now, the majority of the AR-15 rifle sold are flat-top. This is most likely due to the shift in using optical sighting systems on the AR-15, specifically red dot sights (e.g. Aimpoint), which later included other designs such as the EOTech and the Trijicon ACOG.

The fact that most of the AR-15 rifles sold are flat-top variants, many people end up using flip-up iron sights instead of an optic (either due to financial reasons or by choice) as their only sighting system. The problem is that most of the flip-up sights are considered BUIS and BUIS in general don’t have rear elevation adjustments, and the only elevation adjustments can be made using the front sight post. Granted, you can get an elevation zero on a set known distance (e.g. 200 yards). But after that, you’re pretty much stuck with that elevation zero unless you want to make a front sight post adjustment. This is fine at the range, but in the field this isn’t very expedient at all.

Growing up on the AR-15 with A2 sights, and competing in High Power Rifle matches using the Service Rifle, I am very much used to having a rear sight with elevation adjustments. If I have a 200 yard zero, but need to make a 600 yard shot, I can quickly just run the elevation knob to my known 600 yard zero in a few seconds and take the shot. 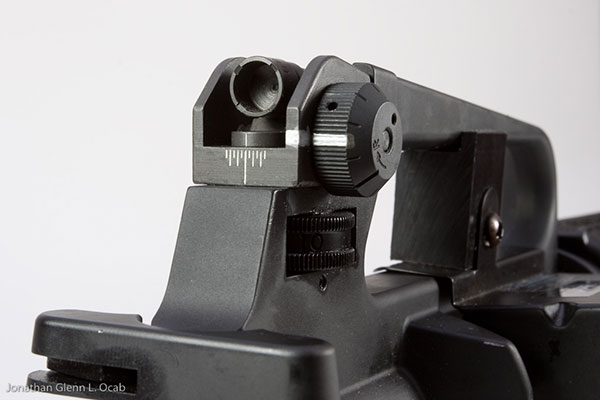 After reading this background information, you now know my mindset when I was shopping around for a set of ‘BUIS’ to compliment the primary optic on my rifle (Aimpoint Micro T-1).

The KAC Micro rear sight is the only rear flip-up sight that I found with both windage and elevation adjustments. There are a few rear sight variants by KAC, but I went specifically with the KAC Micro 600M Rear Flip Sight. 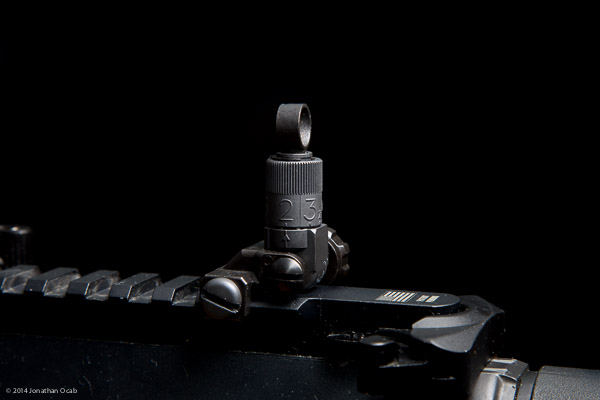 As far as the front sight, I went with KAC Micro Front Flip Sight. 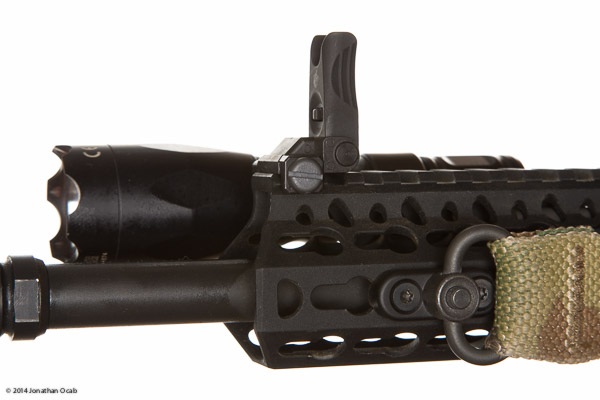 The ‘Micro’ nomenclature simply means the steel KAC sights were designed to be very low profile so they stay out of the way and can clear a scope body (in the case of the rear) when in the down position. 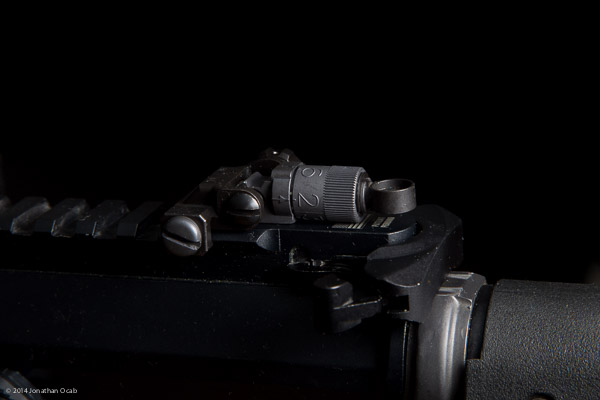 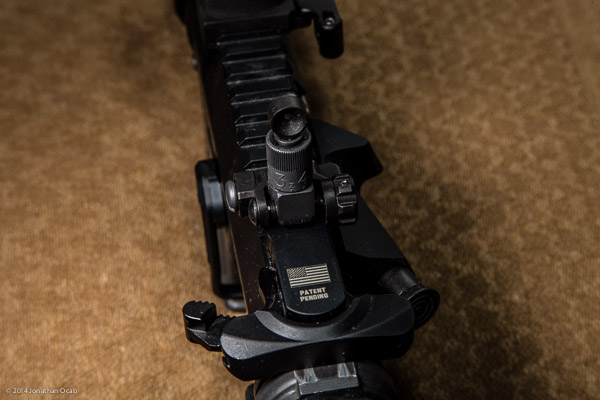 That being said, the windage knob is easily manipulated while wearing gloves.

The flip-up / flip-down action of the sights seems very solid and they lock firmly into place. What I also like about the operation of the KAC Micro 600M rear is that it feels like I’m using an A2 rear sight in terms adjustments; windage knob on the right, elevation wheel on the turret.

Size and form factor aside, the key feature that sold me on the KAC Micro 600M Rear Flip Sight is the 200 to 600 meter elevation adjustment range. The elevation is adjusted by simply turning the rear sight turret which has the hash marks for what is expected to be the 200, 300, 400, 500, and 600 meter zeros. Naturally, the accuracy of the hash marks has a lot do with initial zero, ammo used, sight radius, so the hashes should be treated as being exact.

I set a rough 200 meter zero; ‘rough’ meaning that I don’t have a laser range finder and set my target at my home range where I believe 200 meters should be (within 10 meters or so). I simply set the turret to the ‘2’ hash mark, adjusted the front sight post until I was hitting point-of-aim (POA). When I get a chance, I’m going to verify the zero at known distance, specifically 200, 300, 500, and 600 yards. Note yards not meters. The Santa Margarita Gun Club hosts matches at Marine Corps Base Camp Pendleton, and the range we use has 200, 300, 500, and 600 yard firing lines. I don’t expect the hash marks to coincide exactly with the yardage firing lines at the MCBCP range, but I will want to know what I need dialed in on the rear sight for 300, 500, and 600 yards with a 200 meter (or even a 200 yard) confirmed zero.

There are only two negative issues I found.

One issue is that the cross bolt that is used to tighten the sights onto the Picatinny rail is a slotted / flat head. I would have preferred the cross bolt use a hex head or Torx head for better torque and less likelihood of stripping the head. Also, if one wanted to use a torque wrench, I most people have sockets with hex and Torx bits.

The other issue is the price. The KAC sights cost more than all the other BUIS on the market running around $150 for each the front and rear. That means just over $300 for the pair, when you can often get competing BUIS sets for less than the cost of one KAC front or rear. For example, a popular option on the market is the MagPul Industries MBUS Generation II (polymer) sights which can be had for as little for $75 for the set (both front *and* rear) which is a quarter the cost of the KAC set. Even the MagPul MBUS Pro (steel) sights are under $150 for front and rear set.

Most people see the KAC sights and balk because of the price. I did, too. But unfortunately, I have the deep seeded desire for a quality rear sight with elevation adjustments and was willing to spend on the KAC Micro flip-up sights.

Anyway, if you are looking for a quality steel flip-up rear sight with full windage and elevation adjustments, look at the KAC Micro sights. Should you spend the money or seek a cheaper alternative? If you are actually putting flip-up iron sights on your rifle for your primary (and only) sighting option, then I would highly recommend the KAC flip-up sights. If you are looking solely for a simple “backup” for your primary optic, then you can probably settle for a cheaper alternative.

For me, I do not regret the purchase because I have full confidence in the usability and quality of the KAC Micro flip-up sights.