For a long time I’ve wanted to switch to the Arca-Swiss style of quick-release (QR) system for my tripod. The reason: To use an L-plate. 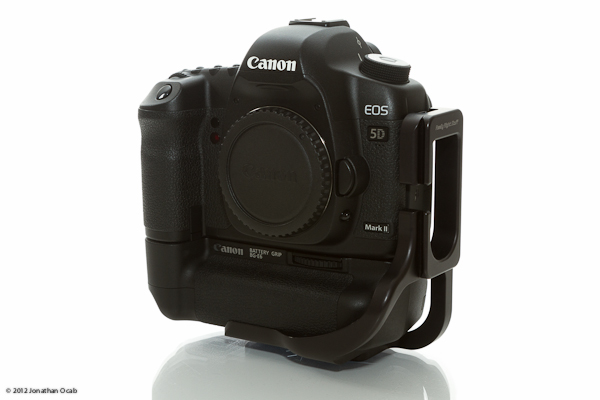 I use the Manfrotto RC2 QR system, which is a ‘traditional’ plate that allows quick (de)attach between the bottom of the camera and the tripod head. While inexpensive and expedient, the RC2 is not as bulletproof in the clamping design as Arca-Swiss style plates. 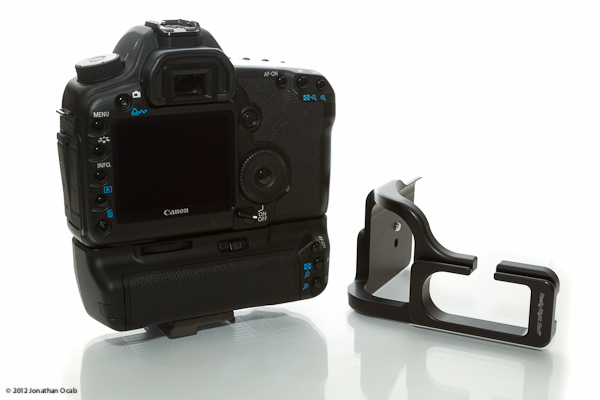 But also with an L-plate, placing the camera in portrait orientation on the tripod keeps the lens on the same axis as the tripod head (verically), thus keeping the camera directly above the tripod head, as opposed to tilting the entire camera to one size. For a demonstration of this, check out this video published by Really Right Stuff (RRS): http://www.youtube.com/watch?v=G4iOxH5vyCo

One day I saw a used Canon 5D Mark II L-plate made by RRS on the Canon Forums and the condition and price was too good to pass up. Before I offered to buy it, I looked into my tripod head options and looked over the RRS page and realized I could just get an Arca-Swiss style clamp to replace the clamp on my Manfrotto 488RC2 ballhead. The plate on the 488RC2 is actually screwed onto a threaded stem of the ball on the tripod head with 3/8″-16 threading, and RRS makes clamps that attaches to this thread pitch. 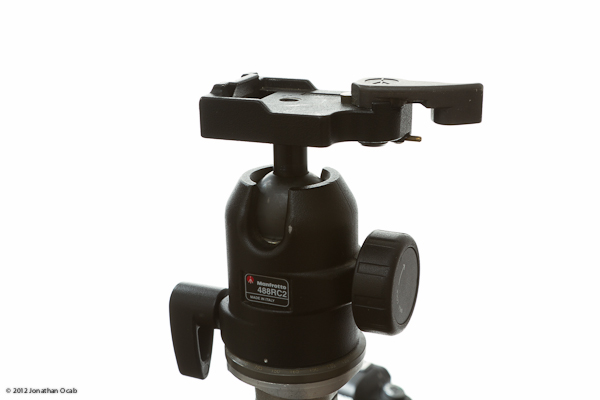 So I decided to get a RRS B2 LLR II (80mm Lever Release clamp w/ dual mount) and converted my Manfrotto 488RC2 to take Arca-Swiss style plates. 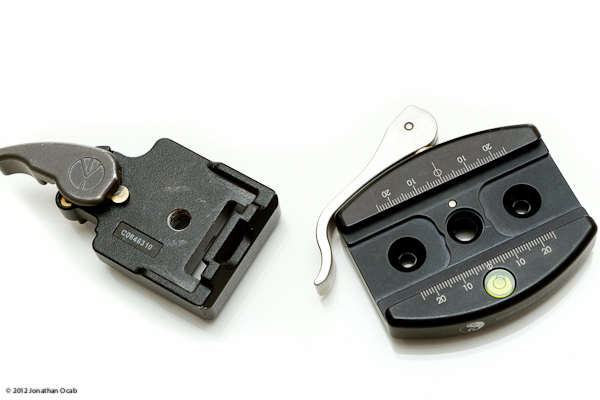 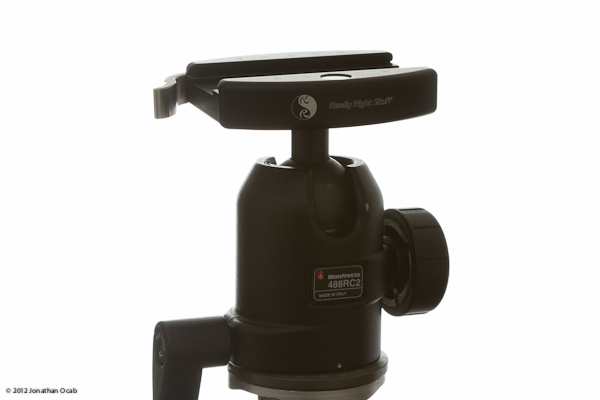 The RRS clamp was just over $140 after tax and shipping and I bought the RRS Canon 5D Mark II L-plate for $140 used. $280 sounds like a lot to many people basically just to be able to have the camera lens on the same axis of the tripod head in either landscape or portait orientation. But that alone makes using a tripod so much easier for things as landscapes (including panoramic stitching) to portrait sessions. 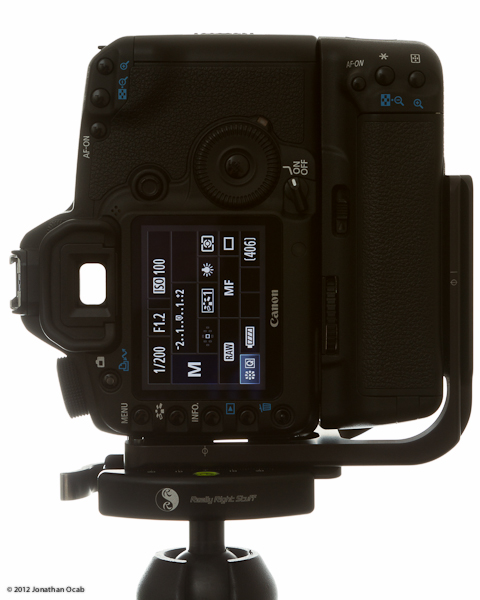 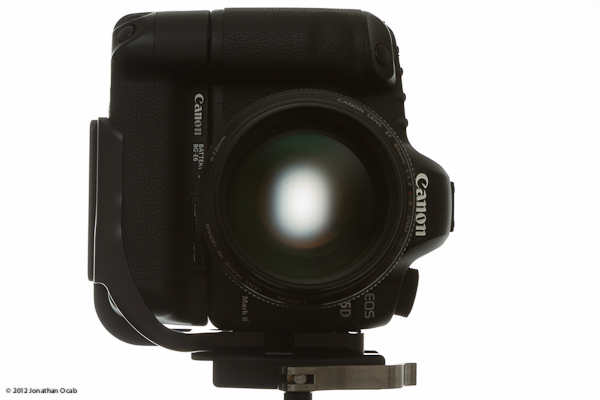 Another situation where the L-plate becomes critical is when using the Alien Bees ABR800 ring flash. If I want to shoot portrait orientation with the ABR800 and the camera is mounted in the ABR800 in the traditional landscape orientation (tripod thread on the bottom of the camera), I would have to handhold the ABR800 and tilt then entire unit. 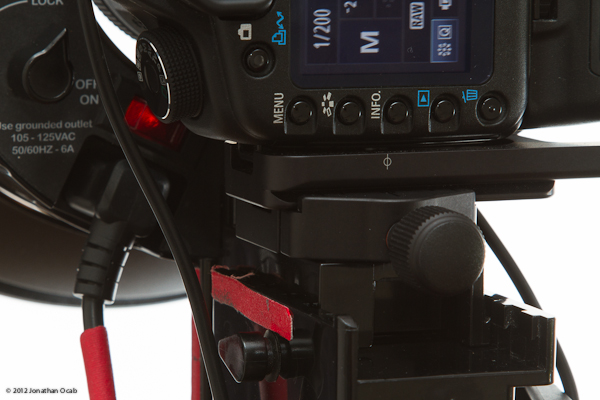 With the L-plate, I can then use the ABR800 in either landscape or portrait mode without having to turn the entire unit. This means I can also use the camera in portrait mode, in the ABR800, and on a tripod. 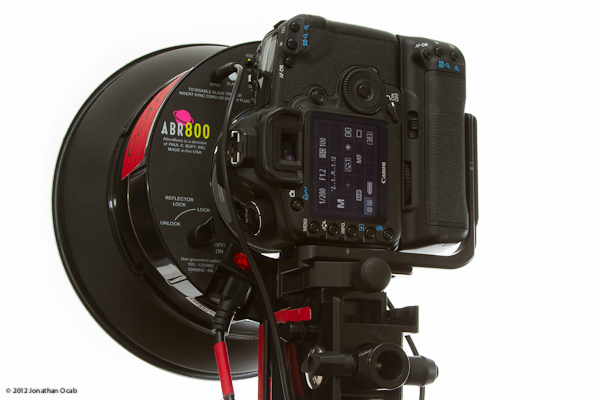 I acquired Arca-Swiss parts back in February. At the time of this writing, I now have in hand the Canon 5D Mark III and am still waiting for the Canon BG-E11 grip. I already pre-ordered the RRS L-plate for the 5D Mark III with BG-E11 so that’s another $180 or so spent on another L-plate.

An Arca-Swiss style solution isn’t for everyone, but for anyone that can make use of the versatility it offers should definitely take a look into it. Even if cost is deterring anyone from making the jump to Arca-Swiss style plates, they should consider doing what I did and look into converting their existing tripod head. While I spent $140 for the replacement RRS QR clamp, there are other cheaper options from RRS (I could have gotten something smaller than the 80mm clamp) or other manufacturers like Kirk Enterprises. Spending ~$100 to convert an existing tripod head to use Arca-Swiss style plate is easier on the wallet than spending $400+ on a new Arca-Swiss style tripod head, and gives you the ability to use L-plates for a low startup cost.

Note: The two Arca-Swiss style heads I was considering buying to *replace* my Manfrotto 488RC2 (now discontinued; succeeded by the Manfrotto 498RC2) were the RRS BH-55 and the Induro PHQ3 5-way panhead. While expensive, these are two high quality and reliable tripod heads. Whenever I do find extra cash to invest in a new head, I will definitely pick one of these two (unless something better is released, either by RRS, Induro, or another manufacturer).