After much internal debate and research on the Internet, I decided to try out the BattleComp 1.0 muzzle brake / compensator for my 16″ mid-length AR.

Having shot NRA/CMP High Power Rifle for so long, I am very out of touch with muzzle brakes or compensators. In High Power Rifle, muzzle brakes are prohibited (except for the M14 platform)m so we never use them. Not to mention that at my old shooting range where I always shot on a shared firing line with benches next to one another, I learned to hate compensators because of the annoying side ‘blast’ or concussion of air and sound they would project laterally.

Often times, the compensators I encountered would actually project concussion laterally but towards the rear, so even if you were directly in line with the shooter, but then took a few steps directly backwards, you would still feel a lot of concussion coming from the rifle.

While the issue of concussion only affects other people around the rifle as it is being fired, I never wanted to use them because I didn’t want to adversely affect other shooters on the firing line, especially when all of the shooting I did was specifically on a shared firing line (both recreationally and competitively in High Power).

So why do I want a compensator now?

Since I’ve been shooting a lot more at a range with private shooting bays, I have been able to practice a lot more ‘dynamic’ shooting, which is why I have built more defensive, non-competition type rifles. This type of shooting has caused me to look at recoil management and even though I have been able to manage a fast rate of fire with the A2 flash hider, I wanted to see if a compensator could give me a little more edge.

Going back to my original misgivings about muzzle brakes in general, my one specific requirement was to find a brake / compensator with minimal side blast or concussion effect. Obviously, the more effective compensators in terms of minimizing recoil are the ones that will disperse the most gas laterally (sideways). But I’m willing to compromise some recoil mitigation with minimal side blast. My specific reason for wanting minimal side blast or lateral concussion is because if I have to use this gun in a team situation, I don’t want my rifle adversely affecting team members next to me in a dynamic shooting situation.

During my research, I ended up considering three different brakes:

I was going based off user feedback found on random firearms related forums and Youtube videos. Unfortunately, I found instances where there were strongly positive and negative opinions about all three of the compensators mentioned.

But it seemed like the general consensus was that the BattleComp didn’t project too much side blast compared to the A2 FH, yet with satisfactory recoil mitigation. The only way I was going to be able to even determine if any compensator is good or not would be to try shooting it myself, so I ordered a BattleComp 1.0. 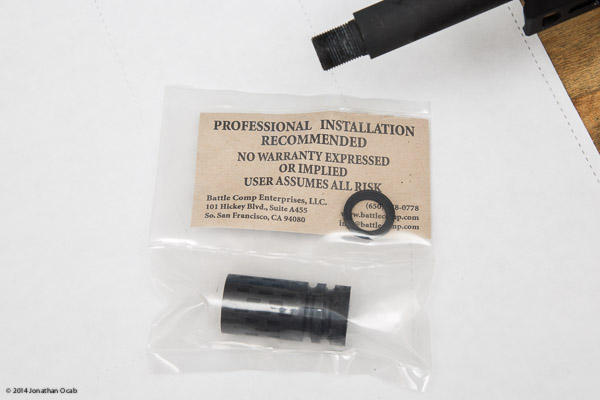 The BattleComp 1.0 is pretty much the same length as the A2 flash hider, so it doesn’t add any more extra length to the rifle. 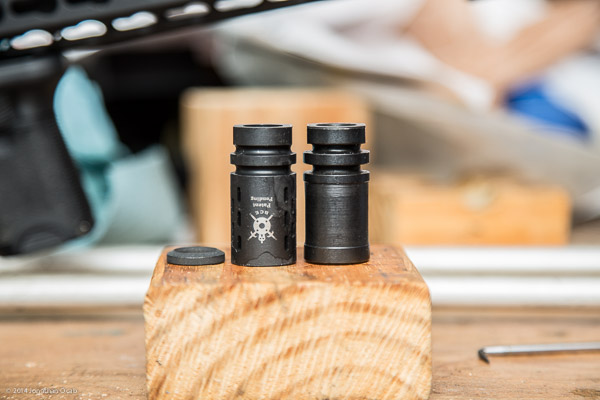 Installation was fairly simple using the included crush washer. It was the removal of the A2 Flash Hider that took a little work. I had to manufacturer some barrel vise blocks out of wood with just under 2″ in size, since that’s the only amount of barrel length exposed on my 16″ mid-length with the BCM KMR handguard on and I was being lazy and didn’t want to have to take it off. But once I got the upper in the vise, a quick smack of a 3/4″ wrench with a rubber mallet to broke the A2 loose (I used Rocksett even with the crush washer).

I took the rifle with the freshly installed BattleComp 1.0 to the range and ran 210 rounds through it.

The POI shift (point of impact) from the zero with my A2 was 2MOA high, so 4 clicks down on the Aimpoint Micro T-1 (1/2 MOA per click) got me back on.

Unfortunately, when I loaded all my gear for the range trip, I neglected to bring my old Colt A2 16″ lightweight upper with A2 flash hider to do some concussion comparison testing. So my side blast testing is all going to reflect my interpretation of how the gun ran.

I expended several rounds with the white side of a standard IPSC target directly next to the muzzle in order to pick up gases dispersed laterally and to show the amount of concussion (by the sway of the target). I then conducted drills at 50 yards on steel to determine reset speed of the sight picture on more ‘precise’ shots. I also did prone tests to show how the dust comes up off the ground.

Again, without an A2 flash hider being shot along side, the above testing is going be subjective to my interpretation of the live fire testing. But with that said, I feel that in terms of side blast, the amount of gases being dispersed laterally at the muzzle doesn’t seem to be that far off from an A2 flash hider. It appears to be more, but not substantial. In urban prone, the amount of dirt and dust thrown in the air looked just like it does when shooting an A2 prone. 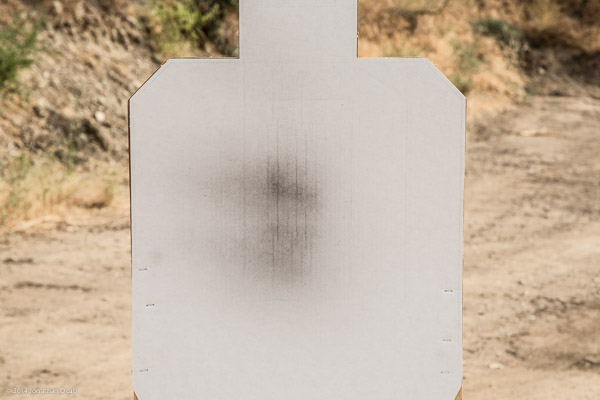 I would like to have stood next to the gun as it was being fired to get a feel for the concussion, but I was at the range solo.

Now as far as the recoil mitigation characteristics, it’s not as much as I would have hoped for, but it’s definitely an upgrade above the A2. With good form, the sight picture resets lightning fast. With bad form, the recoil will still push the shooter back in the stance.

This highlights what I think might be a problem with many user reviews on the Internet regarding various brakes and compensators. I think that many people look to the brake to solve all their recoil problems, when in fact, it’s the shooter who doesn’t have the correct fundamentals to mitigate recoil. A competition style compensator (e.g. 3-gun) will be so good that it can mask the flawed stance and grip of the shooter. But the ‘tactical’ style brakes on the market like the BattleComp or the Surefire, which don’t disperse as much side blast as competition compensators don’t have the same type of maximized recoil mitigation, and thus, can’t help bad form.

So is the BattleComp 1.0 worth it? The current price of the BattleComp 1.0 is right at $150. For what it offers, I feel the price is a bit high, but it fit my requirements as far as some recoil mitigation without excessive lateral concussion effect.

Surefire released a lower cost version of their SOCOM MB556K brake (MSRP $150) dubbed the PROCOMP 5.56 (MSRP $59) which supposedly offers similar performance to the SOCOM (low side concussion) with a far better price point, which might be a better option for many.

I would like to try out the Surefire PROCOMP 5.56, but the problem with testing compensators is that I don’t have the time to constantly swap out muzzle brakes and retest at the range, nor do I have the money to do it effectively (just build additional guns to test side by side), and I’m sure pretty much most of you all out there are in the same boat.

Right now, I’m going to roll with the BattleComp 1.0 and see where this takes me. I’ll have to run a lot more rounds through it to see and then I’ll see if I desire more. 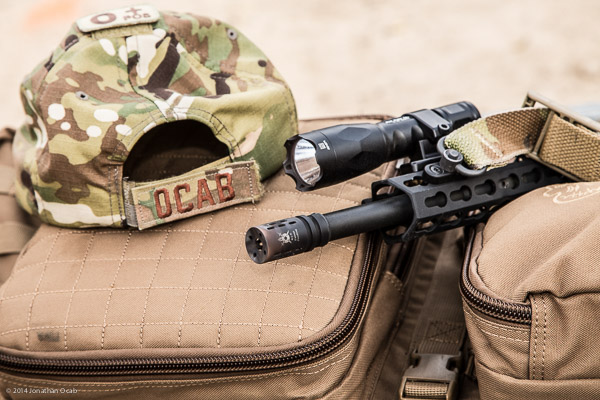 In summary, if you’re looking to move from the A2 flash hider to a muzzle brake / compensator, the BattleComp 1.0 isn’t bad. It will mitigate recoil without too much lateral concussion effect. The price point is high, but is on par with other offerings (sans the newly released Surefire PROCOMP).

But, if you’re fortunate to have access to rifles with a variety of muzzle brakes, or have the time and/or money to acquire and install various compensators on your own, then I suggest you make your decision through your own live fire testing.