The final major phase of my precision rifle project was completed when I acquired the Accuracy International Chassis System (AICS) this past week. 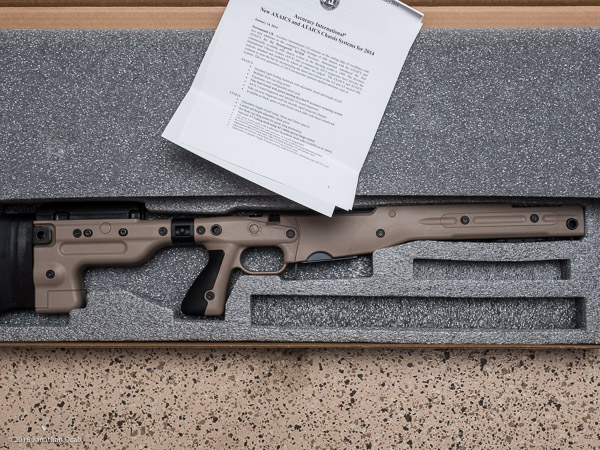 This is specifically the ATAICS, as dubbed by Accuracy International. AT stands for Accuracy Tactical (at least according to the Accuracy International brochure at http://www.accuracyinternational.us/), although I have seen the nomenclature Arctic Tactical mentioned on the Internet, as well. But the ATAICS is actually based off their older design, commonly referred to as simply the AICS. The AICS was originally produced as a thumbhole stock with either a fixed or a folding stock. Eventually, a third party company produced skins that replaced the original AI skins on the AICS, allowing the owner to have a pistol grip instead of the thumbhole.

Due to the popularity of the aftermarket modification, Accuracy International updated the AICS to have a pistol grip instead of the original thumbhole stock, and called it the ATAICS.

Note: There is also the AXAICS (sometimes referred to as AX AICS or AICS AX), which is the latest generation chassis system. I considered this, but I didn’t like the idea of having to run high rings just to get the objective bell of the scope to clear the wrap around barrel forend.

Anyway, the AICS was the final major piece of the puzzle with this whole project. I decided on the pale brown version, though it doesn’t really match any of the common FDE tones used by other manufacturers. 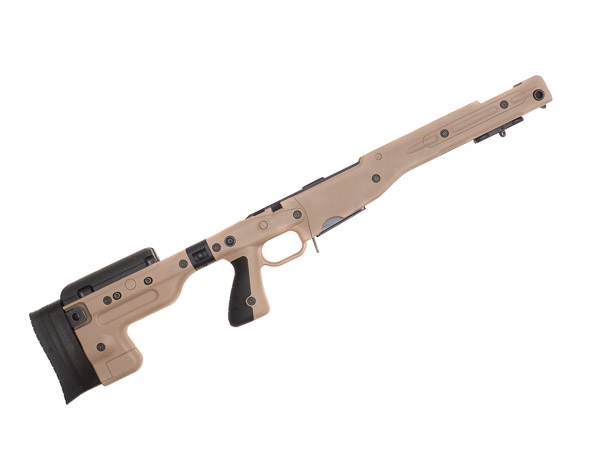 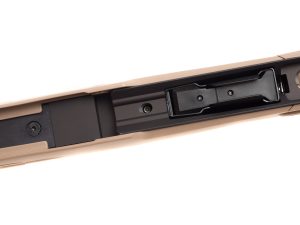 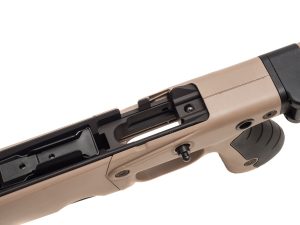 I opted for the folding stock because everyone recommended this one so it made cleaning easier. The cheek riser on the stock will block the path of any cleaning rod, so you need to remove the cheek riser on a fixed stock when you clean. 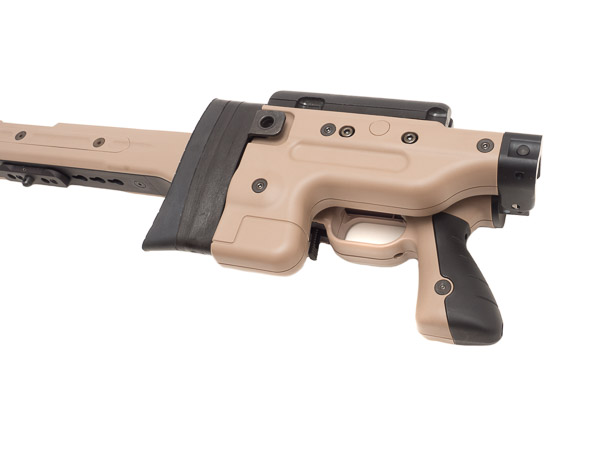 In retrospect, removing the cheek riser is not a big deal, as long as you have the thumbscrews so you don’t have to use a 2.5mm hex driver to remove the riser every time. Going with the fixed stock would save ~$250 versus the folding stock option.

The one major issue that people have with the AICS is aftermarket trigger fitment in the chassis. The Timney trigger is one of the most common aftermarket Remington 700 triggers used, and it is well documented online by owners that you need to make a modification in order to get the Timney trigger to fit. From what I saw online, it has to to do with the design of the Timney trigger’s safety pin. For some reason pin for the safety lever moves side to side and protrudes from the trigger housing during operation. The only solutions are to either inlet the AICS chassis so the trigger pin has room to move outwards or to file off the safety pin.

Fortunately, the TriggerTech trigger that I installed on my Remington 700 does not have this same design issue and dropped in perfectly fine within the ATAICS. 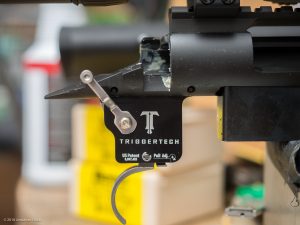 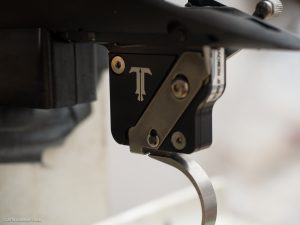 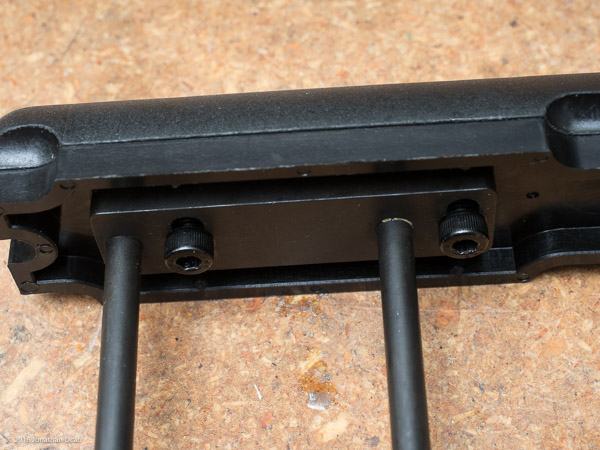 With the cheek riser and spacer bottomed out on the stock, I could not get sight alignment with the Vortex Optics Razor HD Gen II 4.5-27x56mm EBR-2C MRAD and Seekins Precision “low” (1″ height) rings. The cheek riser put my face too high on the stock.

Removing the 10mm spacer is the solution, but the problem is that the existing M5 screws that held bottom cheek riser bracket to the actual cheek piece are too long without the spacer. 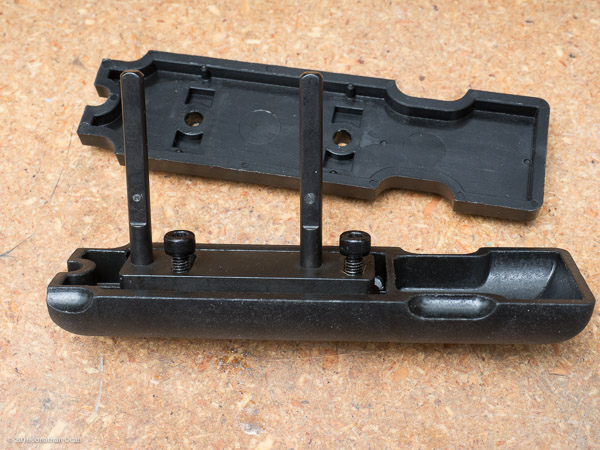 Brownells actually had some words in the product description that stated the ATAICS did not come supplied with M5x12 screws. I actually had filled out the contact form asking what this mean before I placed my order. But only after my order, did they update their product page with the following text in the description notes:

Chassis is NOT supplied with M5x12mm screws for lowering cheekpiece beyond factory setting. These screws need to be purchased separately if wishing to lower the cheekpiece.

So I ended up heading over to a local fastener shop (Rainbow Bolt Supply) who had helped me out the past with longer bolts for action screws in other rifles. For those who don’t know metric fastener nomenclature, M5 refers to metric 5mm. 5mm is the diameter of the fastener shaft. The second number in M5x12, 12, refers to the length of the shaft in millimeters.

Note that metric fasteners typically follow a standard thread pitch for each shaft diameter. M5 will usually have .8mm thread pitch, but in rare instances it could be different.

The screws that come with the AICS cheek riser and spacer have an 18mm shaft length, so they are M5x18. M5x12 are needed to connect the cheek bracket to the cheek riser without the spacer. 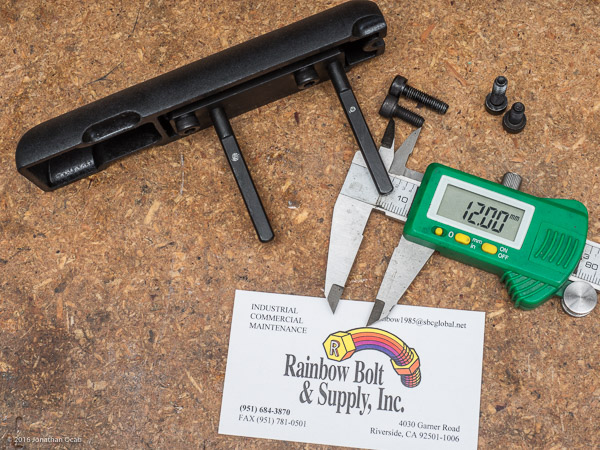 Anyway, that was the only major stumbling block I found when installing the ATAICS.

Note that many people might get stuck when it comes to the action screws. They are 3/16″ hex socket cap screws so any standard 3/16″ hex bit or hex key will work. But the AI spec calls for the action screws to be torqued to 53 in-lbs (6.0 NM). Most people will have a 3/16″ bit that will fit in their torque wrench driver, but the issue with the ATAICS is that you need a long 3/16″ hex shaft in order to get the depth needed to torque the action screws. 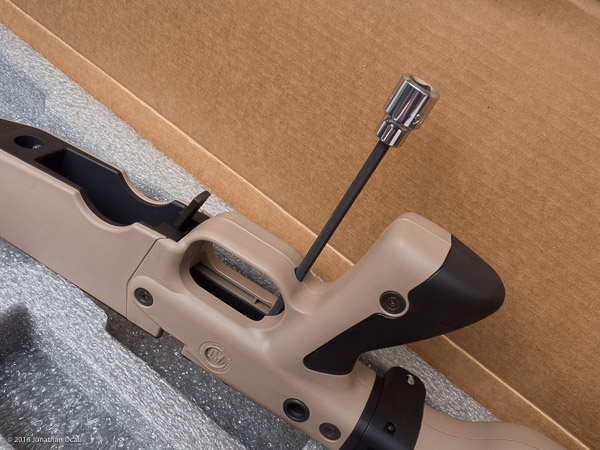 I ordered a 3/16″ hex bit with 3/8″ drive with a 6″ shaft from Amazon right when I ordered the ATAICS from Brownells because I had read a longer bit would be needed. You can probably get away with a 3″ shaft, but the 6″ shaft was a safer bet.

But after the rifle was dropped into the ATAICS, everything looked good. Ample amount of space between the factory Remington 700 Police barrel contour and the ATAICS barrel channel. No issues with the controls and the chassis skin. 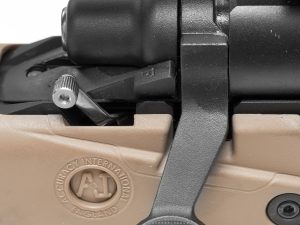 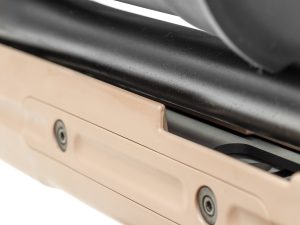 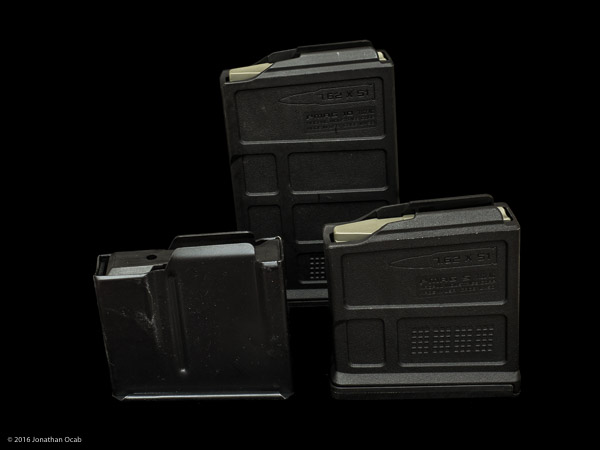 While the price of the Magpul AICS pattern magazines are a Godsend, there is one complaint I have read on forums with regards to the Magpul magazines and that is the maximum cartridge overall length (COL). The official SAAMI specification for cartridge overall length with the heavier bullets (e.g. 168gr and 175gr) in the .308 Winchester is 2.800″.

Granted, many handloaders/reloaders produce ammunition for their specific guns with longer COL because they want to seat the bullet so it is closer to the lands when chambered. I do this in my service rifle AR-15 with my 600 yard ammo. I use Berger 80gr VLD and I actually seat the bullet so it runs .0015″ into the lands when chambered. Obviously, this is not a big deal for me because rounds during the 600 yard slow fire prone stage in an NRA High Power match are all single loaded (not from magazine).

Users of AICS systems have noted that the Magpul AICS pattern magazines are not as long (internally) as Accuracy International magazines. I have not tested how long a cartridge the Magpul magazines (or the AI magazines) can accommodate before the tips of the bullets drag in the magazine. But I did take some photos of rounds in the magazines just for visual comparison. 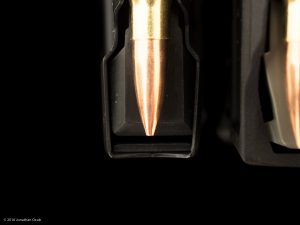 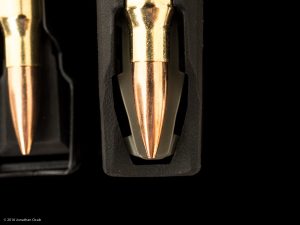 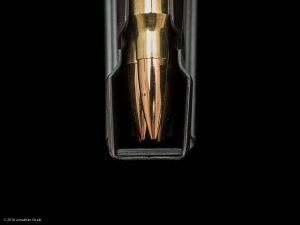 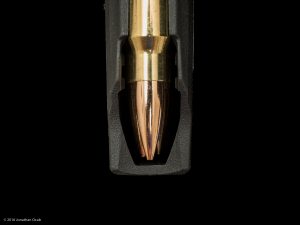 Just eyeballing the photos, you can sort of see that the AI magazines do seem to have more room for a slightly longer cartridge overall length.

I prefer to develop .308 loads that are close to 2.800″. I don’t like to get in to the business of seating long when it comes to magazine fed rounds. If I needed as much accuracy as possible and it required me to seat long (or even at or into the lands), I would most likely be in a situation where I could single load the rounds through the ejection port. Otherwise, I don’t think it is very difficult to find a 1MOA or better load at SAAMI spec COL in .308 Winchester.

Anyway, I ended up going to the range to break it in and to re-zero the rifle after the stock to chassis change. 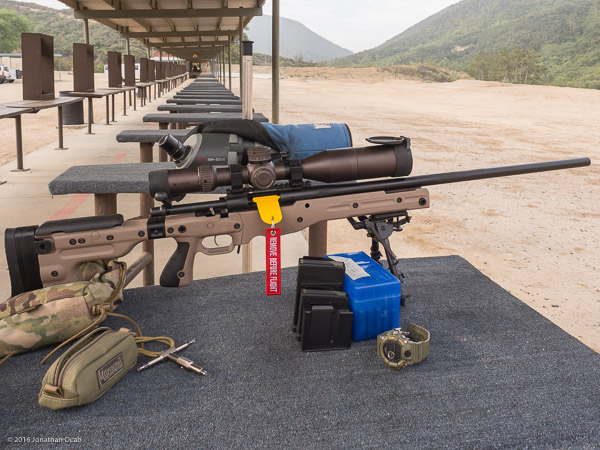 After it was all said and done, I actually wasted about 30 rounds trying to zero the rifle because the AICS bipod stud to Keyslot adapter came loose. You can watch the ordeal in Range VLOG #009 from my Range VLOG series.

In summary, sometime after I shot some rounds with my old Sierra Match King 175gr load to get the action settled into the ATAICS (and re-torquing the action screws), the bipod stud loosened up, causing my groups to open up. I was wondering why the rifle was recoiling unpredictably during my range session. Whenever the shot would impact high or wide, the rifle actually would recoil such that it didn’t reset on back on target. Apparently, it was all because of the bipod stud. After tightening down the bipod stud to the keyslots on the bottom of the ATAICS (15 in-lbs plus a few extra degrees without the torque limiter), I shot some solid groups exactly where my zero was originally.

Lesson learned: Make sure *everything* is tightened down and/or torqued to specification. 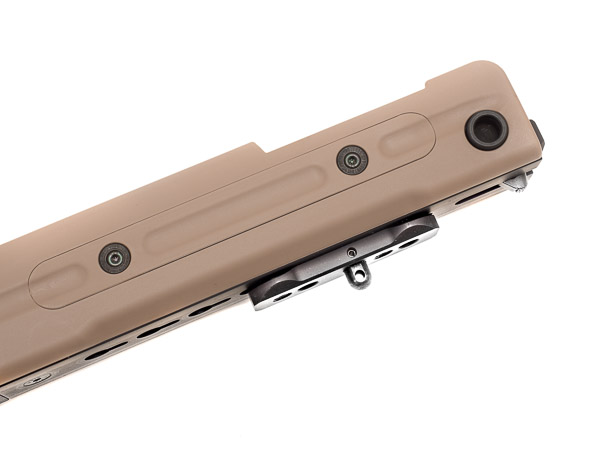 So the last major piece of my Precision Rifle project has been completed. The only modifications I plan on doing are to get a new, larger bolt handle installed, and perhaps swap out the firing pin and spring with the Tubb Speedlock system. There is a Los Angeles area gunsmith (http://700barrels.com/ aka http://ar15barrels.com/ aka Randall) who can do the bolt handle modification, so I will be reaching out to him in the near future.

But as far as this project is concerned, there is nothing major happening to it until I rebarrel. We’ll see where it stands at the 2500 round point. Then we’ll be talking about 6.5 Creedmoor. 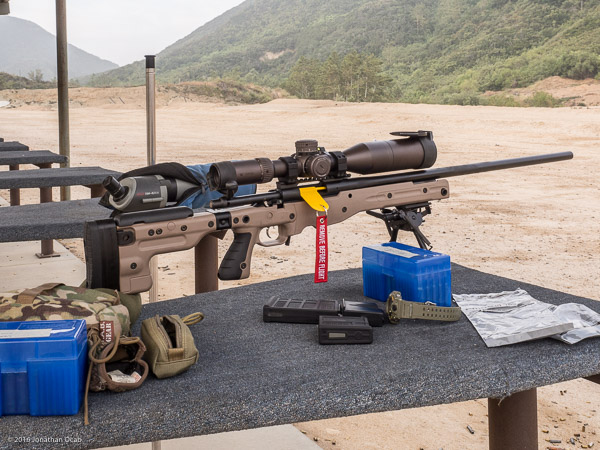