Ever since I upgraded to Adobe Lightroom 3, I’ve found it to be significantly slower than LR2 on my 13″ MacBook Pro. I noticed LR3 would get very lagged when using the spot healing tool. There were a few updates to LR3 which Adobe claims addressed the issue, but I found those updates didn’t solve my problem. My iMac did not suffer the same performance problems as did my MBP. 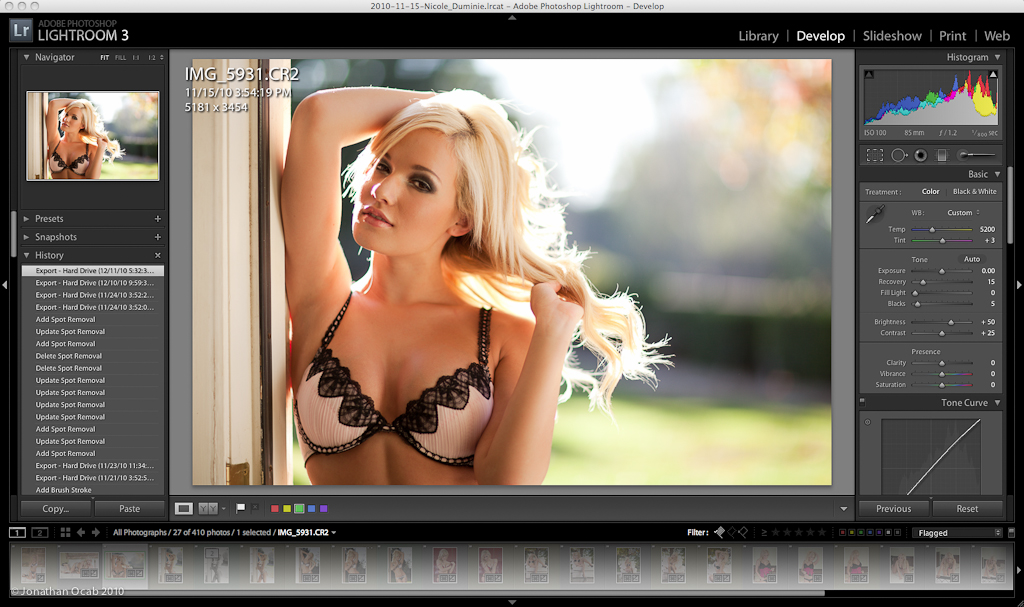 I finally decided to see if a hard drive upgrade would fix this.

I was using the Seagate Momentus 500GB 5400 RPM drive on my MBP and all my LR3 libraries (and referenced photos) are on an external FW800 drive. Since my iMac had no problems with the same amount of RAM (4 GB) and running the LR3 libraries off the same FW drive, I could only deduce that the system drive was the culprit. It appears that even though the LR3 libraries and source photos are on a separate drive, the LR3 application must be doing a lot of disk I/O on the application volume/drive.

So I ordered a Seagate Momentus XT 500GB 7200RPM hard drive from Newegg. A quick 5 minute hard drive swap and about 3 hours worth of OS and application reinstalls, and data restoration later, I was back up and running with the faster HD on the MBP. So I plugged in my external FW800 drive I use as my ‘working’ drive for photo editing and immediately noticed the speed difference when I loaded a library containing photos with lots of spot healing edits.

It appears my hypothesis regarding the disk I/O of LR3 is correct. I think the reason why LR3 is reliant on the system/application install volume so much is because of the action history. Every time you make any sort of change / commit an action within LR3, it records it in the history so you can step backwards to undo those actions. So every time you spot heal, dodge, burn, etc., LR3 writes out the action and state change to disk. This amount of disk I/O, in combination with a fairly slow performing hard drive (5400 RPM, 8MB cache), resulted in the poor LR3 performance on my MBP.

That said, if anyone else is experiencing slow LR3 performance on their laptops (even when using external drives for the LR3 libraries and referenced photos), try upgrading to a faster hard drive.

I originally upgraded the stock hard drive with the 500GB 5400 Seagate for more capacity with lower power consumption. But I am willing to sacrifice some battery life with a faster drive for a faster LR3 workflow.