A few months ago Think Tank Photo, the company renowned for their photography bags, announced a new addition to their already popular ‘Airport’ product series, the Airport Navigator. 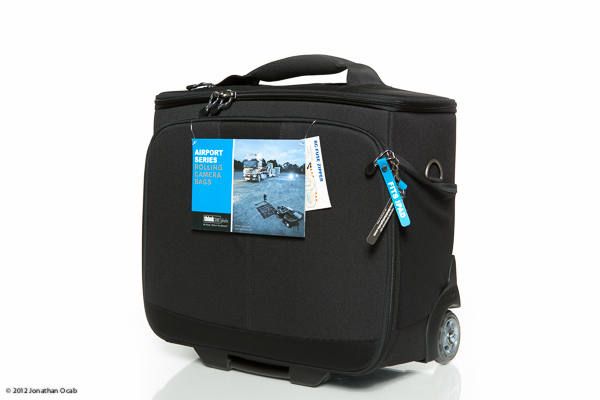 The Airport Navigator is another rolling bag, but what sets this specific rolling bag apart from the others in Think Tank Photo’s existing product line such as the Airport International, is the accessibility of the contents of the bag. A traditional rolling bag must be laid on its back on a (fairly) horizontal surface in order to open the front flap and access the compartment.

But the Airport Navigator is no traditional rolling bag. 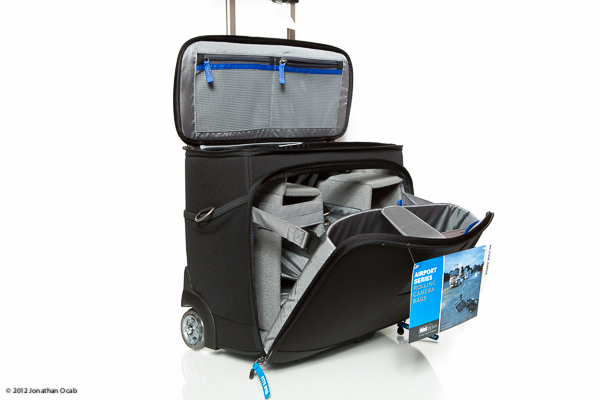 As you can see in the above photo, the Airport Navigator’s compartments can be accessed from both the top and front of the bag, without having to lay the bag down horizontally on its back. I can tell you right now that the accessibility design is the one feature alone that caught my eye, and convinced me to shell out my hard earned money to get a closer “hands-on” look at the bag and try it out.

When I saw the Navigator on the Think Tank Photo website, I was excited about the idea of having a rolling bag to carry a fairly sizable kit (e.g. two bodies), but being to operate out of the bag in an expedient fashion and with a minimal footprint. 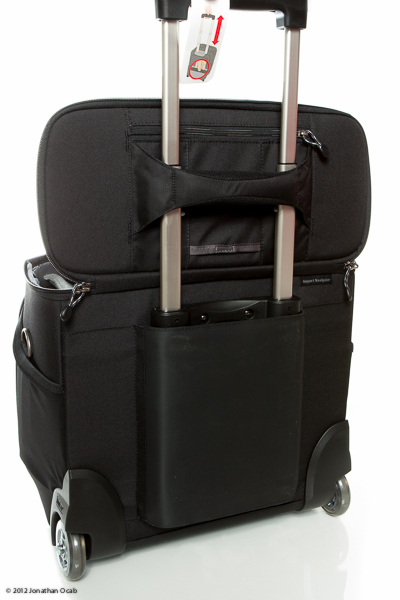 The core specifications of the Airport Navigator as listed on the manufacturer product page are as follows:

Think Tank Photo rates this bag as being suitable for two (2) pro-size bodies (cameras with battery grips) with 70-200 lenses attached in addition to 3 to 6 more lenses and/or accessories, along with a 15″ laptop and a tablet (e.g. iPad).

As you can see above, I setup the bag so I directly get to my camera bodies from the top access flap. But what about the rest of the dividers in the main compartment? 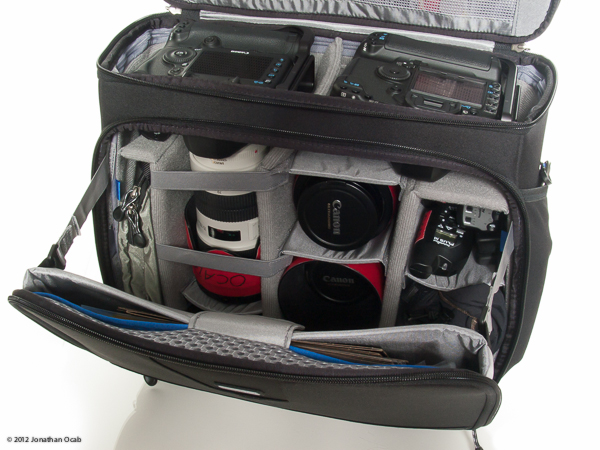 The front panel for the main compartment is held in place by retention straps when it is fully unzipped, keeping the door open at around 30 degrees. This is great because it mitigates the ‘disaster’ of gear spilling out into the floor when you open the front panel, and still gives you access to all the gear.

I set up the bag such that one body (Canon 5D Mark III, primary) has the Canon EF 70-200 f/2.8L IS II attached and the rest of the dividers are setup for a Canon EF 24-70 f/2.8L (hood reversed), Canon EF 85 f/1.2L II, and wireless flash triggers (PocketWizard MiniTT1, FlexTT5 x 2, PowerMC2 x 2, AC3, Plus III, and Paul C Buff Cybersync). A backup body (Canon 5D Mark II) without a lens also sits at the top. Inside the table pocket I have my iPad and inside the laptop pocket I actually have gels and gel holders for the Paul C Buff LiteMOD system. 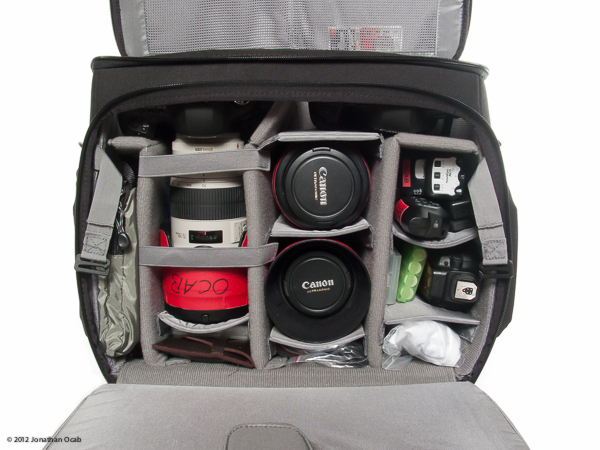 I got the opportunity to use the bag on a location shoot in Downtown Los Angeles this past weekend to run it through its paces.

That said, the Airport Navigator is not perfect. There are a couple of minor things that I did notice when I was setting up the compartment for my gear.

I highly recommend the Think Tank Photo Airport Navigator. Photographers that want to carry a couple of camera bodies with a couple of lenses and extra accessories with a laptop and/or tablet in a convenient, mid-sized rolling bag should definitely consider this bag.

For me, I’m definitely going to hang on to the Airport Navigator. I actually think this will see more use than my Airport International v2 because of the way I operate.