The New Year always starts off with a bang, not just because of fireworks, but because in January people flock to Las Vegas for SHOT Show, and 2014 is no exception. 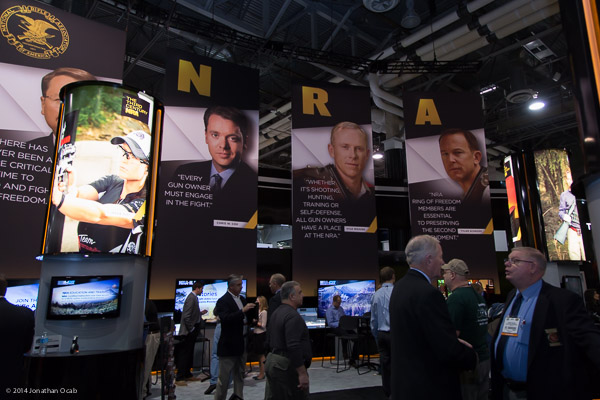 As like the previous five years, I took it upon myself to make the boring, yet brisk, three hour drive from my home in Southern California to Las Vegas to attend the 2014 SHOT Show.

SHOT Show 2014 was in the Sands Expo Convention Center, as it has been in the years prior, but the major change this year is that it is now managed by ConvExx, a Nevada based exhibition and event organizer. Anyone familiar with SHOT Show knows that Reed Exhibitions was the long time manager and producer of SHOT Show. But the NSSF and Reed Exhibitions severed ties after Reed Exhibitions took a stance on not allowing AR-15 rifles to be shown at the Eastern Sports and Outdoors Show in early 2013, which it also managed.

As far as I am concerned, the management of SHOT Show looked to be on par with previous years.

I only spent a day and a half at SHOT Show this time around, simply because I have condensed / streamlined my SHOT Show experience. I only hit up the major manufacturers and see a few of the niche, smaller companies that I have vested interest in.

Since I am a Glock operator, I obviously stopped by the Glock booth to check out the recently announced model 41 and model 42. 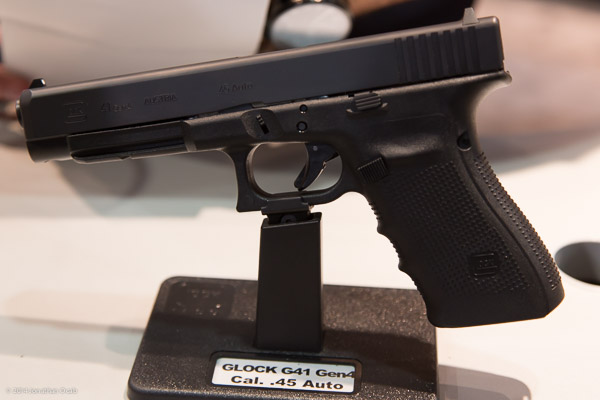 The Glock 41 (Generation 4) is a long slide .45 ACP in nearly the same dimensions as a Glock 34 and 35, except a few millimeters longer and a millimeter taller. An interesting new addition to the Glock line, but I’m not entirely sure how popular this will be. I think most people desiring a long slide Glock will stick with the 9mm and 40S&W offerings (G34 and G35, respectively).

The new Glock 42 (Generation 4) on the other hand could be a signal of things to come. The G42 is a single stack sub-compact in .380ACP. People were excited when they heard news of a new “Glock single stack”, but many were downtrodden to realize it’s in .380ACP and I was one of those people. 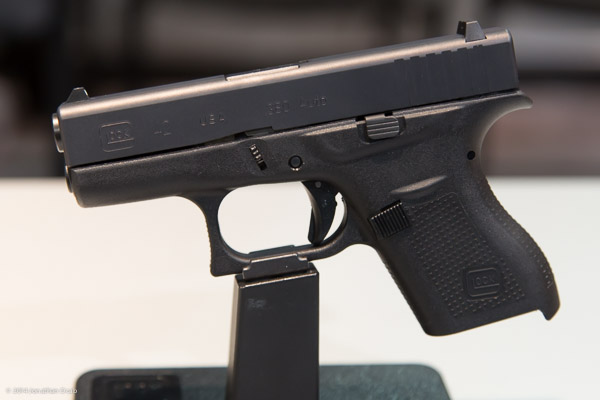 The single stack sub-compact Glock in 9mm is considered the “Holy Grail” for Glock fans and it would appear that Glock fans will be continuing to wait for the time being. The G42 definitely feels great in the hand due to the thinner grip, and if you look at it side by size with another Glock sub-compact like the G26 or G27, you will see a significant difference in grip width as indicated in the photo below with the G42 next to a G27 (both Gen4). 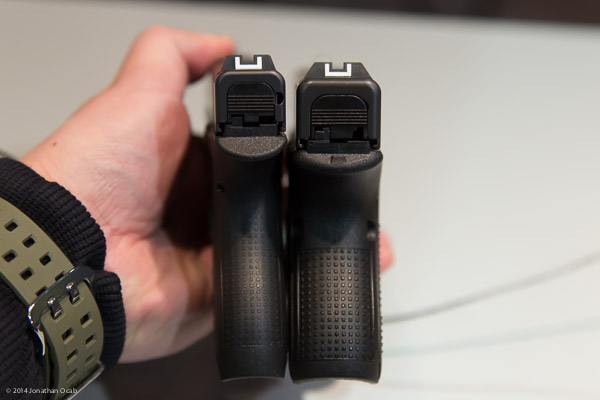 I like the G42 form factor, but the chambering is holding me back (and likely a lot of other people). Considering .380 is so close to 9mm, it still boggles the mind on why Glock released the G42 in .380ACP as opposed to 9mm. I guess we’re going to have to wait another 11-12 months for the Holy Grail.

On the subcompact pistol front, Remington has jumped into the arena with the R51. The R51 is a reimplementation of the Remington Model 51 which uses a delayed blowback action in combination with a locking breech block, originally designed by John Pedersen. This design results in less felt recoil (Remington cites 25% reduction in muzzle rise). 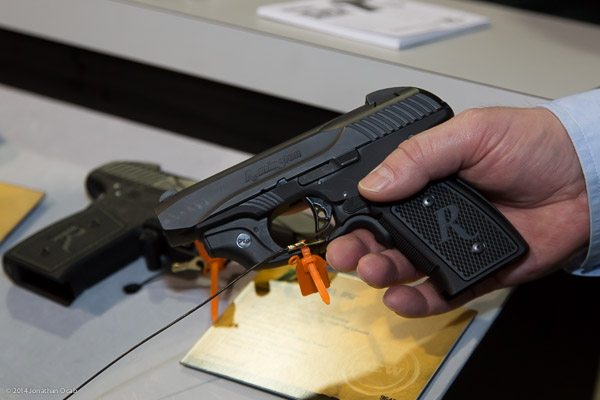 The R51 has an aircraft grade aluminum alloy frame and a carbon steel slide. It has a 3.4″ barrel chambered in 9mm (+P) with a seven round magazine. Since I don’t attend the Media Range Day, I didn’t test fire it, but I will say that the trigger is one of the better out of the box triggers I’ve felt on any pistol not a 1911. Very crisp, with no creep.

It seems like Remington is late to the party as far as a concealable self-defense pistol, but I think the R51 might have a chance in the marketplace.

Continuing on with Remington in the pistol arena, they released several new 1911 R1 variations, most noticeably the 1911 R1 Carry Commander in .45ACP. With a 4.25″ barrel, the Carry Commander has details one would find to be quite nice for a ‘production line’ gun, with 25LPI checkering on the front and rear grip straps and Novak sights. 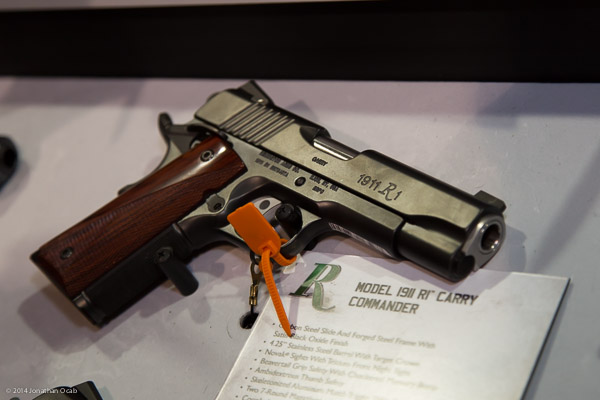 The one other new notable item by Remington for me is the Remington 700 Tactical Chassis. It is a Remington 700 action in a MDT TAC21, which is an anodized aluminum chassis. 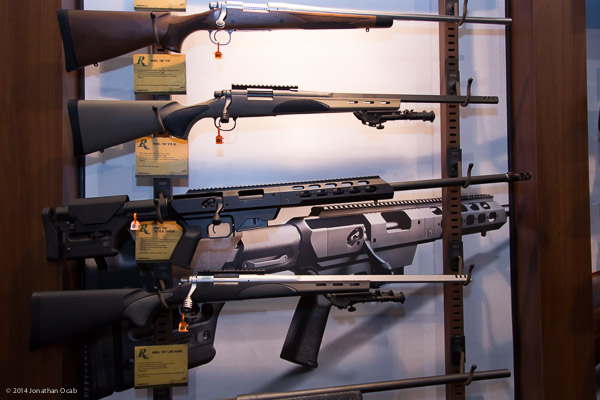 The MDT TAC21 has actually been available for anyone to build their own (or upgrade) Remington 700 rifle, but now Remington has decided to address the civilian market who are clamoring for the lesser attainable Remington Defense sniper rifle offerings such as the Remington MSR (Modular Sniper Rifle) which is usually only sold to MIL/LEO. 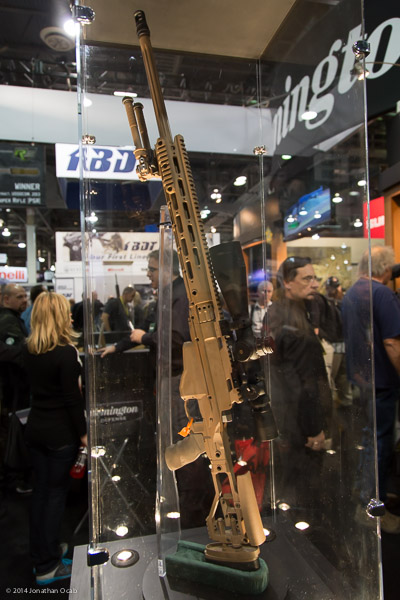 Stopping by the Sig Sauer booth, I did take a look at the new P320.

The P320 is designed on the premise of being the ‘safest’ pistol in it’s class. It employs a 5-point safety system:

The 3-point Take Down Safety System 1) prohibits the pistol from being disassembled with a magazine inserted, 2) prohibits disassembly without slide locked to rear, and 3) rotation of the takedown lever does not require tools or the trigger to be manipulated (e.g. pulled). 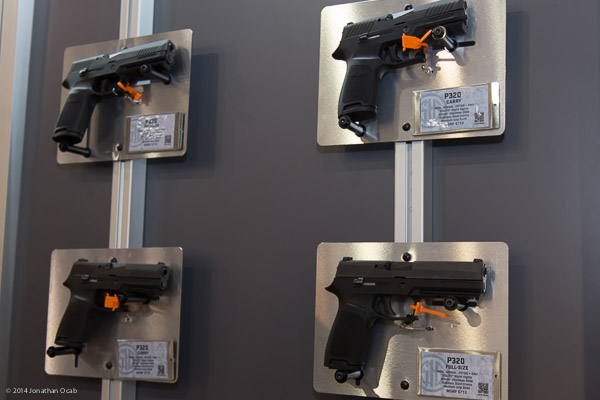 I respect Sig Sauer pistols, but I feel that the P320 is more a response to the political and legal climate with regards to making pistols more ‘safe’. Too often you read about negligent discharges after a gun owner attempts to clean a gun that isn’t properly unloaded, particularly Glocks which require the trigger on the unloaded gun be pulled to disassemble. The P320’s safety features would mitigate these negligent discharges.

Frankly, I don’t anticipate much of the civilian market to be buying into the P320, but the powers at be in law enforcement agencies might decide to embrace the P320 due to the safety features employed for gun takedown (disassembly).

On the other hand, one new pistol offering that I would definitely like to have is the Springfield XD-S 4.0 in 9mm. It is essentially the XD-S single stack 9mm which has a 3.3″ barrel, but in a 4″ barrel design and it utilizes the same seven or nine round magazines for the XD-S. I would still like to get an XD-S, but if I’m going to jump through the hoops to acquire one (legally) in California, I may just wait until next year and pray to God that Glock decides to quit teasing us and finally releases a single stack 9mm. 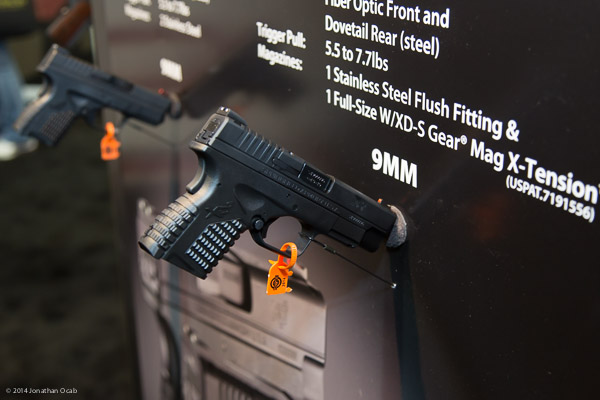 Another new pistol that caught my eye is the Smith & Wesson SD9 VE. This is a concealable pistol with a 4″ barrel designed to be compliant in California. It has all of the ‘neutering’ for California (load chamber indicator, magazine safety) except for microstamping and is compliant because it was rostered prior to the California microstamping date of enforcement. 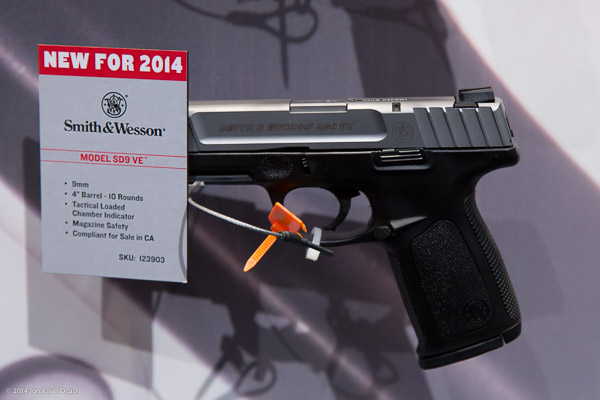 While I am mentioning this pistol, it’s memorable in my mind because it had a horrendous trigger. It’s a double-action only striker fired pistol, which I have no problem with, but the pull is around 8lbs with a terribly long trigger reset. I can’t imagine this gun gaining much traction amongst CCW customers.

If you noticed the title of this posting, this is 2014 SHOT Show Recap – Part 1. I will continue my personal 2014 SHOT Show summary in Part 2 to be posted shortly.

For fun, I’m going to give a way a Hornady hat signed by Jessie Duff, current shooter for Taurus, Hornady, and Leupold, and recently named USPSA Grand Master. 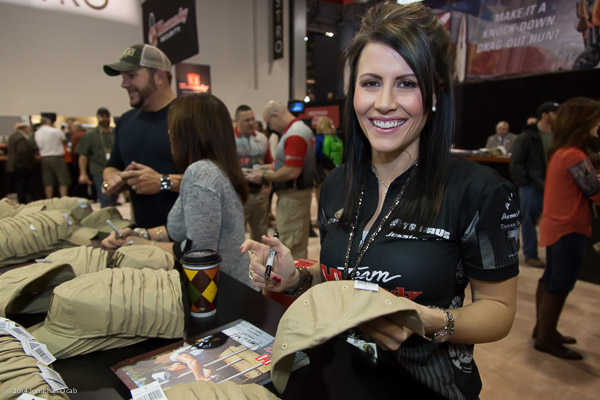