Part 1 of my 2018 SHOT Show After Action Report covered some aftermarket parts for the Remington Model 700 rifles (and similarly patterned actions). Many people own actual Remington manufactured 700 rifles/actions, but there are those who prefer to shoot custom actions that utilize the same footprint as the 700. This is so that they can get a better constructed action with high quality control, and take advantage of all the accessories and parts available for the 700 series of rifles.

While not necessarily new, the Havak rifle/action by Seekins Precision had a strong presence at their booth. 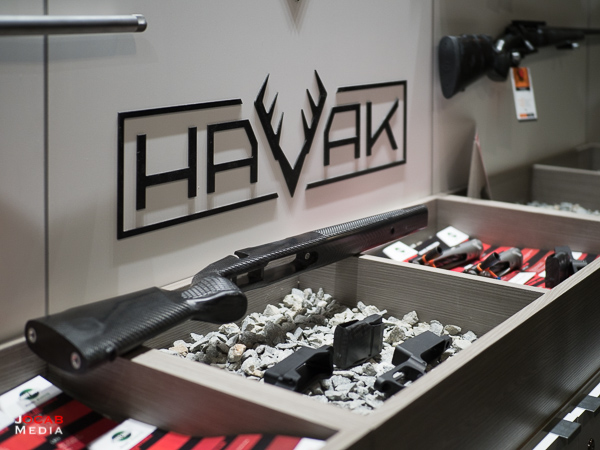 Last year, Seekins Precision introduced the Havak 6.5mm Creedmoor rifle. This bolt rifle has a 700 footprint and with a lot of the improvements you commonly see in custom actions such as an integrated recoil lug, improved (M16-style) extractor, and 4 locking lugs. 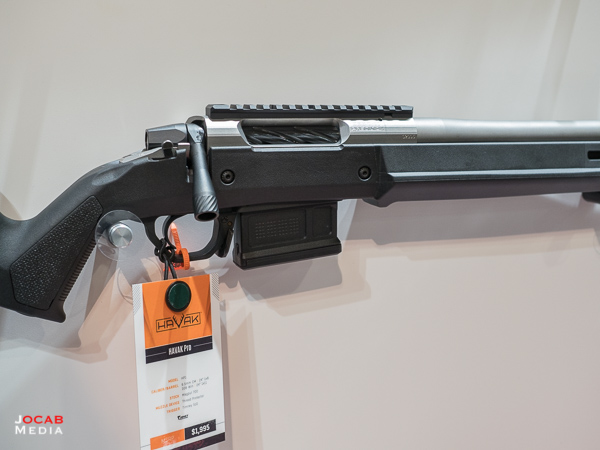 But recently, Seekins Precision has made the Havak available as an action-only, so people who want to build their own rifle and desire the Seekins Precision Havak action can now acquire one. The price is $1200 USD, which is comparable to most custom 700 actions. 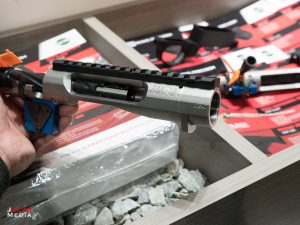 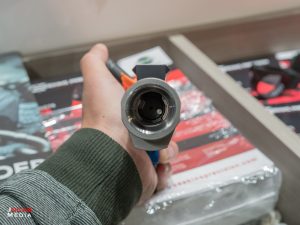 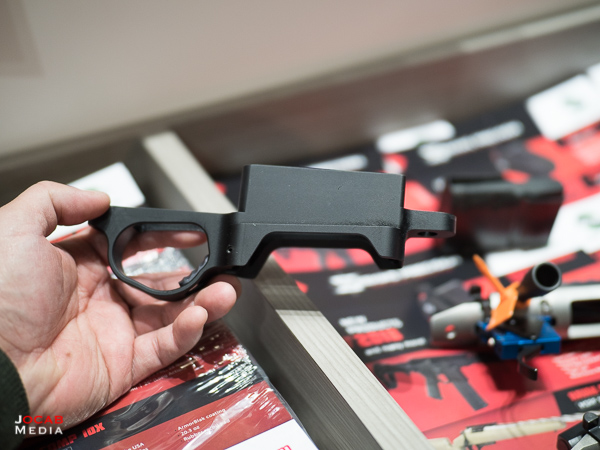 Dubbed the Precision Rifle DBM, the Seekins Precision DBM is made out of hard anodized billet aluminum. It has a Badger Ordnance M5 footprint and accepts AICS-style magazines. The Precision DBM has a front barricade stop and includes the pillars and corresponding action screws.

At a $179 USD price point, this is an incredible alternative to the highly regarded Badger Ordnance M5 DBM which retails for over $300 USD. Since the M5 DBM is a common inlet by stock manufacturers, this makes the Seekins Precision DBM a convenient, cost effective DBM choice. Not to mention Seekins Precision makes quality products, so even at nearly half the price of the Badger Ordnance, it is definitely not half the quality. 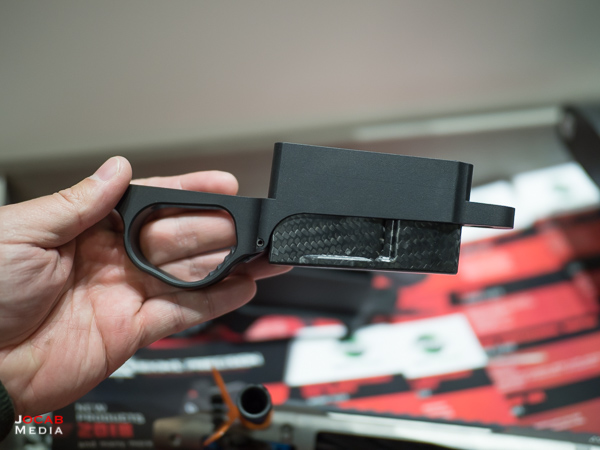 I do not have weight data on the Procomp CH2 stock at this time, but it is about the lightest 700 pattern stock I have ever handled. The Procomp CH2 stock is going to be inlet for M5 DBM, and work with the Seekins Precision DBM and other M5 compatible DBM.

A recently announced action at 2018 SHOT Show comes from Zermatt Arms Inc. / Bighorn Arms in the form of the Origin action.

The Bighorn SR3 and TL3 actions are not really well-known in the mainstream market, but those who pay attention to precision bolt rifle are aware of the Bighorn Arms actions. These actions are 700 pattern actions that are threaded for compatibility with small shank Savage barrels (1.055″-20) and carry a price of around $1250 give or take depending on options.

But the newly announced Origin action is a sub-$1000 action that trims the price off the Bighorn Arms SR3 and TL3 down to $825 USD. 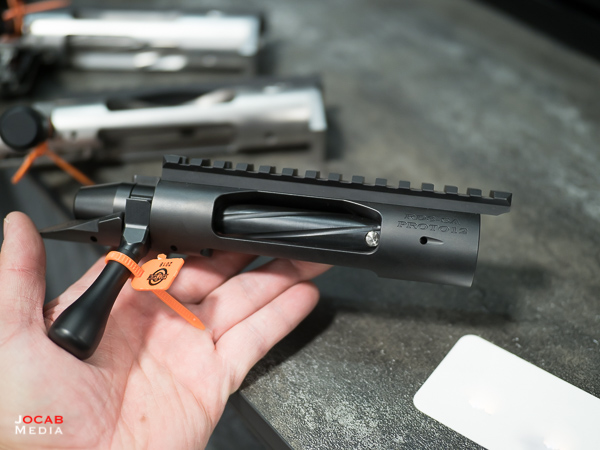 The Origin is actually being manufactured by Zermatt Arms Inc. (Bennett, NE) in a partnership with Bighorn Arms. ZAI allows Bighorn to outsource (while still Stateside) machining to increase production. 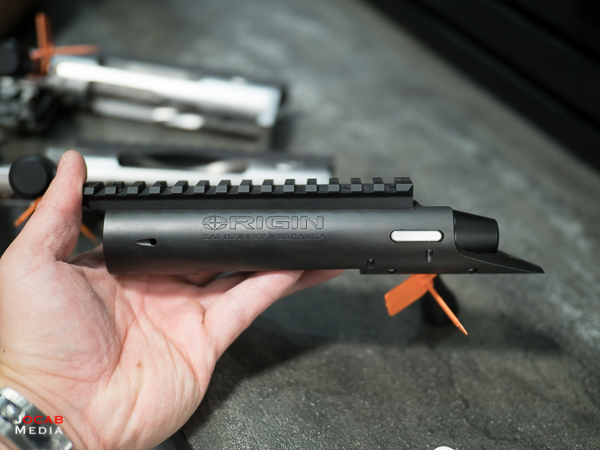 That being said, the ZAI / Bighorn Origin looks quite impressive in terms of what it offers in a custom action for well under $1000. Sporting a 700 footprint, the Origin is a controlled round feed action, just like the SR3 and TL3 actions, and will have a pinned (not integral) recoil lug as well as a pinned rail. 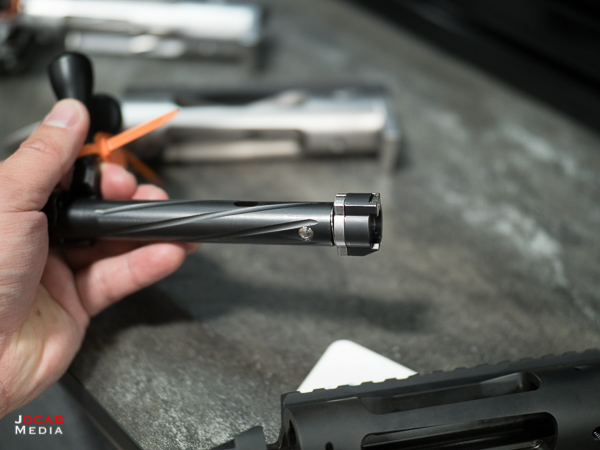 The Origin is going to be black nitrided with a DLC bolt head. The bolt head is swappable, and the Origin will have .223, standard (.308), and Magnum bolt head options available. Note that the bolt head is a floating design, similar to the Savage action. 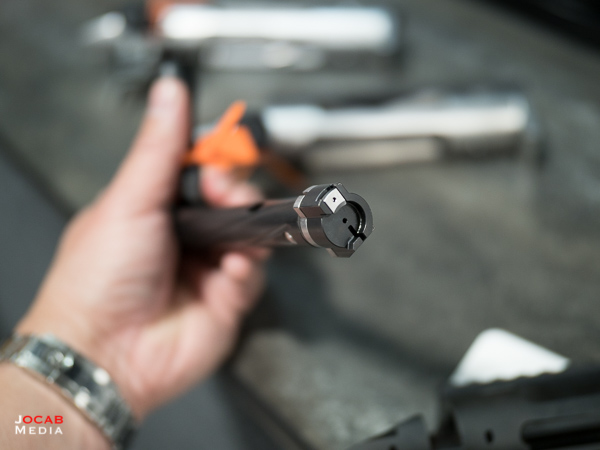 The Bighorn / ZAI actions all currently have floating bolt heads. While a floating bolt head is ideal in terms of helping mitigate any issues with the receiver and bolt face not being square / true to the barrel chamber, this is a mitigation you would hope is not necessary in a custom action. With a custom action, you would hope everything is true. But given that this action is designed to allow the use of pre-threaded, pre-chambered barrels for quick and easy customer barrel changes, perhaps the floating bolt head is more to mitigate imperfections in a customer installed pre-chambered barrel.

In the case of a gunsmith installed shouldered barrel, a floating bolt head is going to be rendered unnecessary, unless the gunsmith did a really poor job.

But the Bighorn / ZAI Origin action looks like a very solid execution for a ‘budget’ custom action. As I write this, the Origin is available for a cost of $750 USD under a SHOT Show pre-order promotion until the end of January 2018. On 2018-02-01, the price goes up to $825, which is still a great price for this action.

Given $750 USD price for the Origin, you would think I would have ordered one, but I did not. The reason is because of what the American Rifle Company just recently announced. 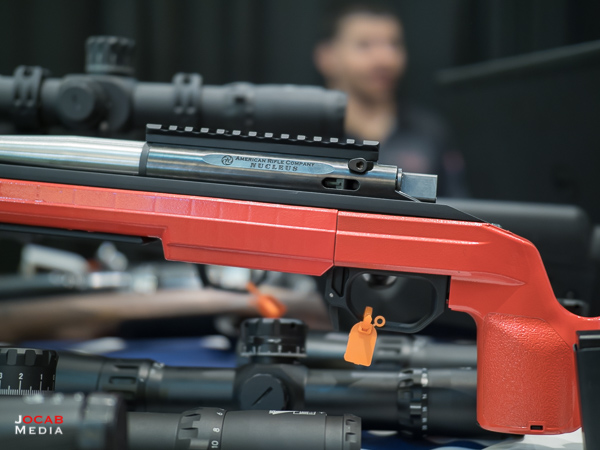 For those that do not know, my last rifle build is a 6mm Creedmoor on an American Rifle Company Mausingfield action. 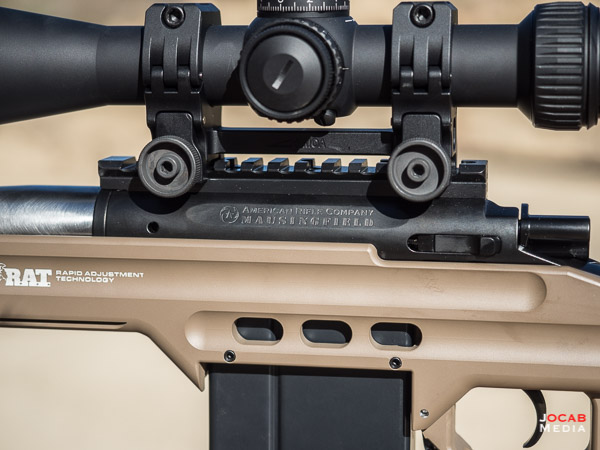 The price of the American Rifle Company Mausingfield is $1600 USD, which is towards the higher end of the range for custom 700 footprint actions.

The ARC Nucleus is meant to be a more cost effective action at a price of $1000 USD. This is still a bit high when you compare it to other custom actions (even ‘budget’ actions), but there are specific design features that make the Nucleus unique. 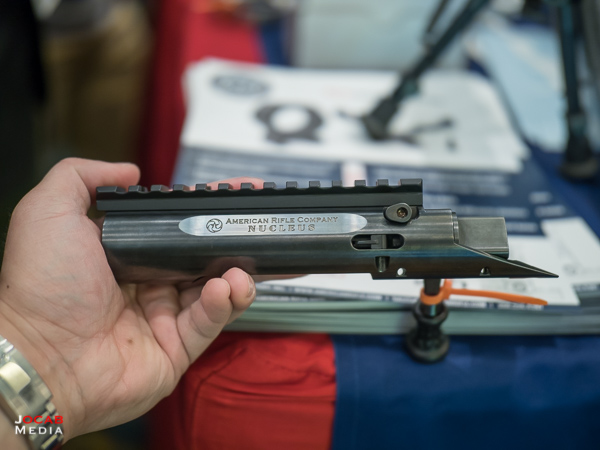 The Nucleus does not utilize the external Mauser-style extractor found on the Mausingfield, but instead utilizes a controlled round feed extractor that functions with the Nucleus’ three lug bolt design. 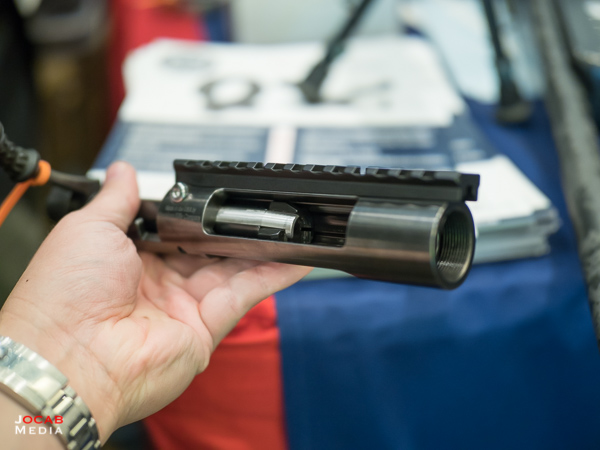 But the Nucleus does use the external Springfield 1903 style ejector. I actually prefer this style of ejector because it reduces the amount of parts in the bolt head / face. 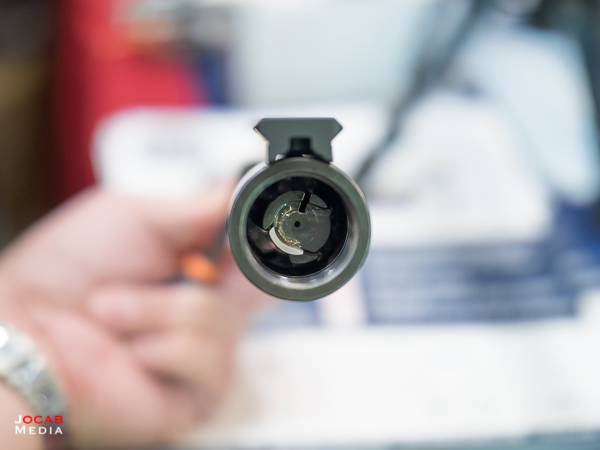 The biggest cost cutting measure for the Nucleus from the Mausingfield is switching to a non-integral recoil lug. It is now a separate, but keyed recoil lug that centers with the scope rail. The Nucleus is now alloy steel that is black nitrided, as opposed to stainless steel with DLC on the Mausingfield. 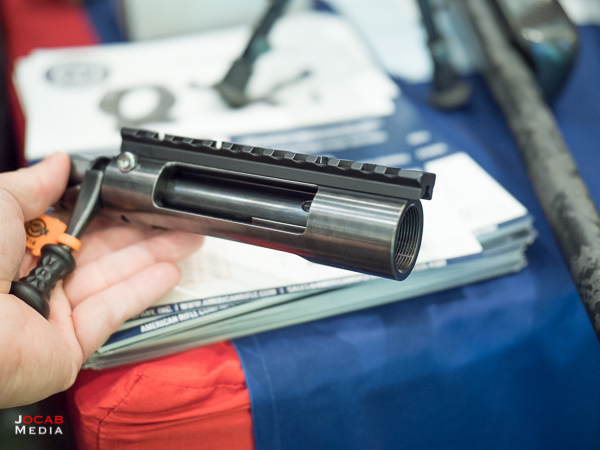 As with the Mausingfield, the scope base / rail will be interchangeable. It uses a different design than the Mausingfield, but will also be keyed to the top of the Nucleus receiver in such a manner that it prevents any yaw or movement.

Since the American Rifle Company has an introductory price of $850 USD through SHOT Show (with a $250 USD deposit to lock in at that price), I decided to take advantage of it and pre-ordered one. Starting 2018-01-29, the Nucleus will be sold at the regular $1000 USD price.

Note: I was told that the pre-order demand for the American Rifle Company Nucleus was a lot more than ARC anticipated, so the delivery time of the action could extend deep into 2018 depending on when you order.

Considering I just discussed three new custom Remington 700 footprint actions, it is quite apparent that this is a good time to get into bolt rifles. The AR-15 platform has dominated the market these past several years. Factory bolt rifles have seen a resurgence that was sparked by the Ruger Precision Rifle and the Precision Rifle Series style competitions. Custom bolt action manufacturers have always been there to cater to the high end customers, but are now taking advantage of the growing demand and interest in bolt rifles, by creating more economical, yet high quality (and innovative) custom bolt action receivers.

Since I have spent this segment discussing new custom bolt action rifle receivers, it would be appropriate to close out Part 2 of my 2018 SHOT Show After Action Report mentioning my run in with John McQuay, better known as 8541 Tactical. 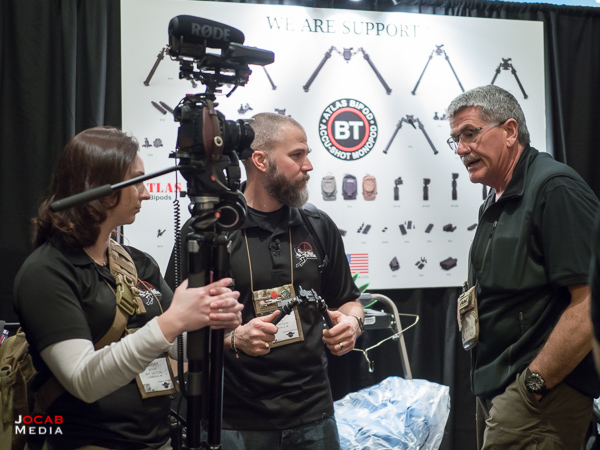 Anyway, I said hello to John McQuay at the Accu-Shot / Atlas booth, but ended up running into him again in the SHOT Show Press Room and had a short, yet engaging, conversation with him about cameras, production workflow, and media retention. Really friendly guy, just like he comes off on his videos.