In the previous parts of the Cleaning Firearms series of articles, I discussed how I clean a firearm with regards to the AR-15 rifle. Cleaning a semi-automatic pistol is much like cleaning a rifle, except it takes less time due to the smaller gun. 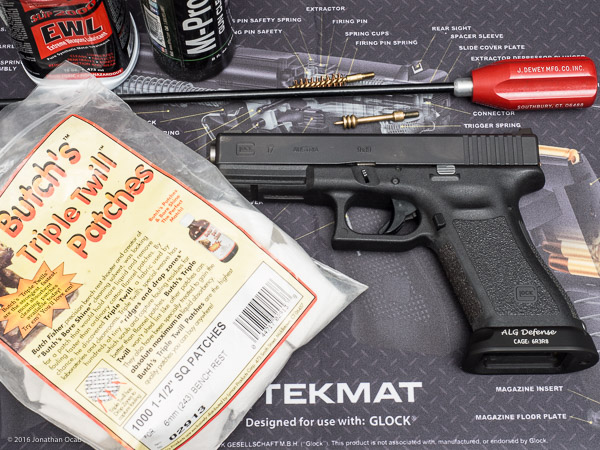 Thus, my personal cleaning procedure for general cleaning of a pistol is similar to that of a rifle such as the AR-15, except scaled down. In the discussion of cleaning a pistol, I will use the Glock 17 (Gen 3) as the example firearm. Glock pistols are very prevalent, so this is a good pistol in which to use for a demonstration. Plus, cleaning other semi-automatic pistols are going to be conducted in nearly the same manner.

I break down the Glock into it’s sub-groups, just like I do with the AR-15 for cleaning. But the three component groups for the Glock pistol are: 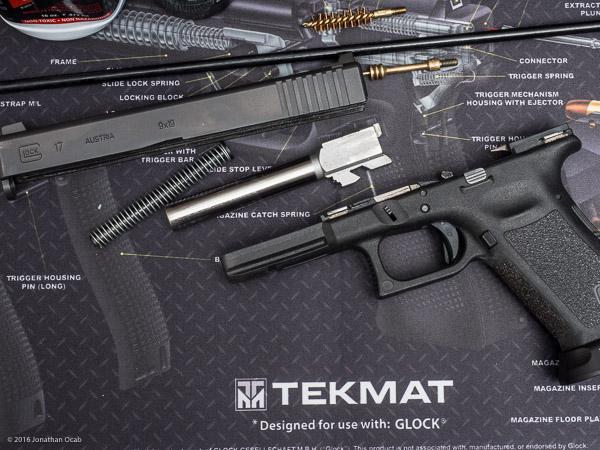 I begin by spraying down the slide and the barrel with MPro-7 gun cleaner. I want the MPro-7 to soak into the bore to loosen the dried up fouling for easier cleaning. While this is happening, I first start on the slide. 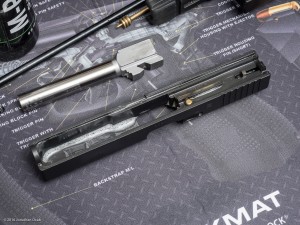 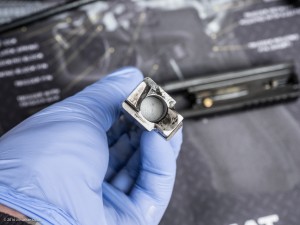 Cleaning the slide is quite simple. I’ll use a nylon brush to scrub down and agitate any dried fouling in the slide. Then I use a shop towel with MPro-7 to wipe down the internal and external surfaces of the slide. 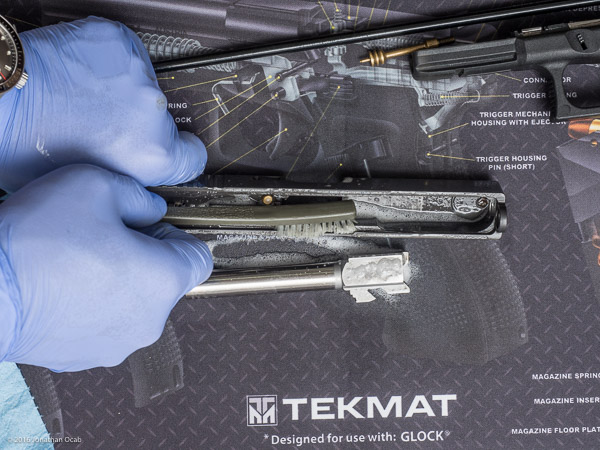 After cleaning the slide, I will proceed to cleaning the barrel. I will brush the bore several times to loosen the fouling in the bore lands. 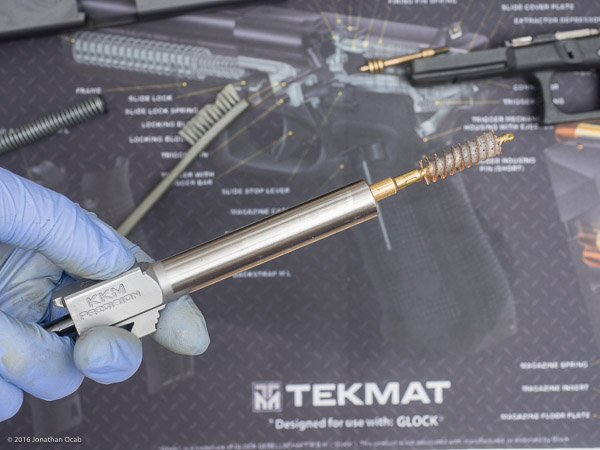 After brushing the bore, I will then run through the barrel several times with wet (MPro-7) and dry patches on a pierce-style jag, until there is minimal to no fouling streaks on the patches. 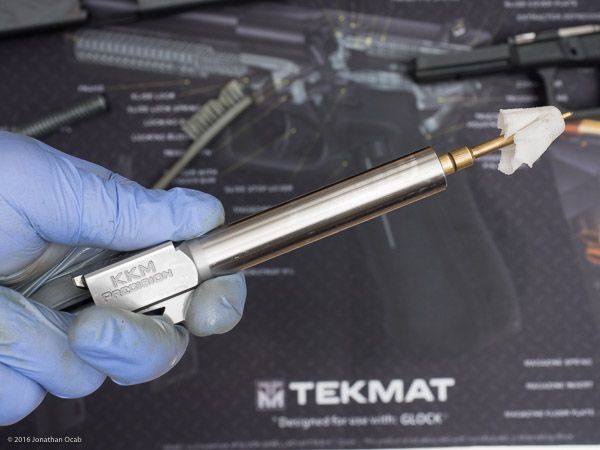 After the bore is cleaned out, I will clean off any fouling on the externals of the barrel, including the barrel hood areas, recoil spring lug area, and the chamber area with a nylon brush and a shop towel. 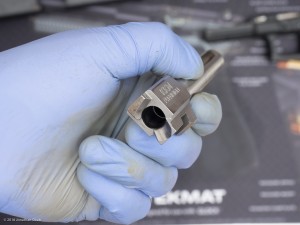 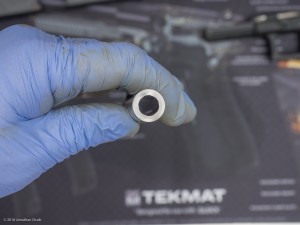 Afterwards, I will spray out the chamber and bore with brake cleaner to get any residual fouling and gun cleaner. 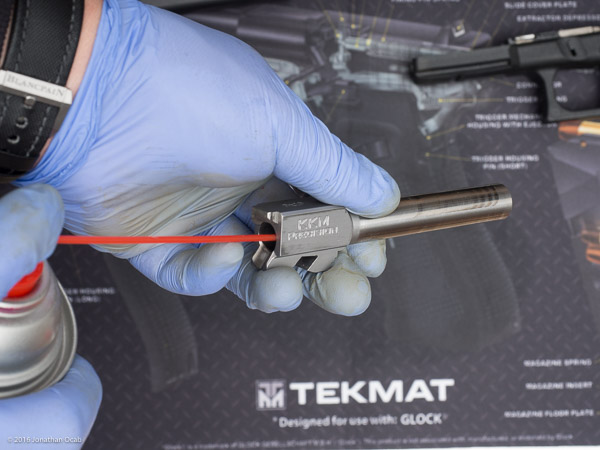 The final stage consists of cleaning the frame. I usually don’t have to do much in this area. What I like to do is clean off the slide rails on the frame with a nylon brush and shop towel with MPro-7. I will also wipe off all the visible surfaces of the trigger group (trigger bar, ejector, housing, etc). I will wipe off the surfaces of the frame as well as the inside of the magazine well with a shop towel damp with MPro-7. 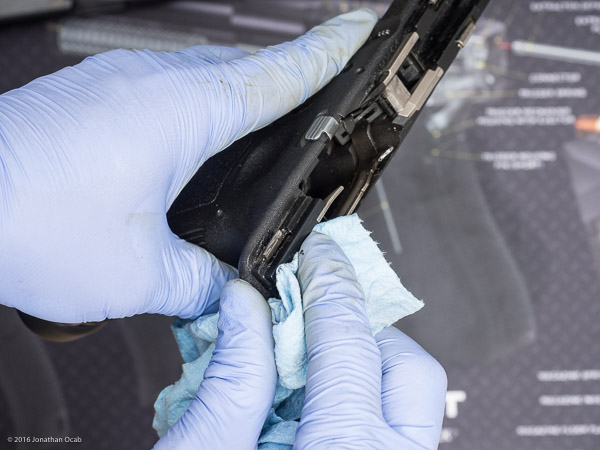 After everything is cleaned up, I proceed to lubricate the Glock with Slip2000 EWL. I will put an oily patch through the bore to give a light surface coating for rust prevention. I will wipe down the barrel with a shop towel and Slip2000 EWL. I will also spread a coating of oil all over the internal an external surfaces of the slide, and put extra oil on the slide rail grooves. 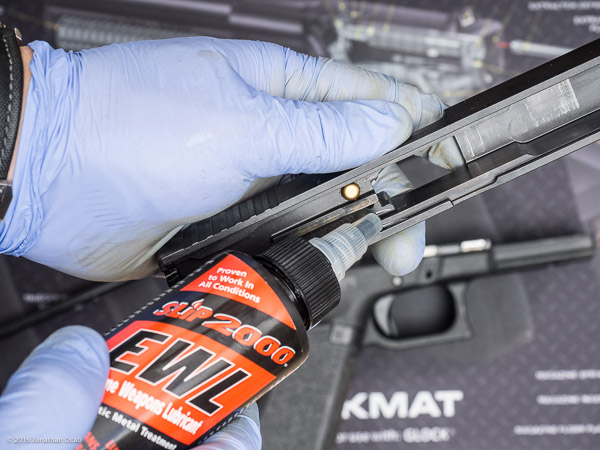 The frame will get oil on the slide rails. 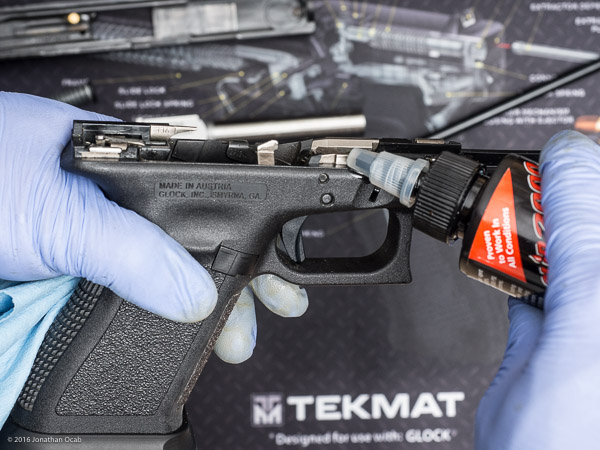 Then I reassemble the pistol and put oil on the barrel hood area, and cycle the slide several times, and afterwards, wipe down the gun with a shop towel to remove excess oil. 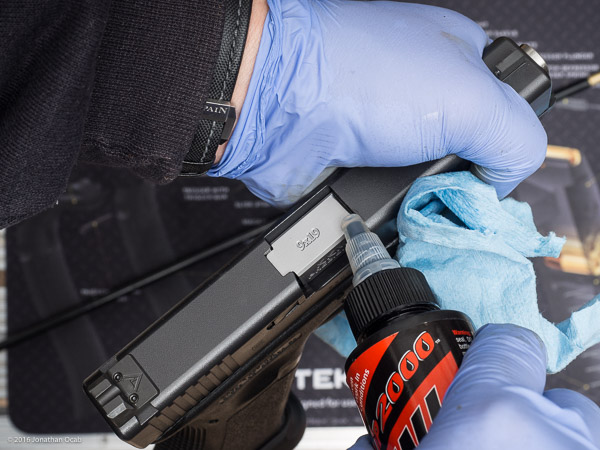 This is my procedures for cleaning the Glock pistol. While this is meant to be an article discussing how I clean a pistol, and isn’t the only way to clean, I think the procedures I have described is quite similar to how the majority of pistol owners clean their handguns.