One of the critical accessories I put into my 2018 Jeep Wrangler JK Unlimited Rubicon is a fire extinguisher. It is fairly important to have one for a vehicle, in the event there is a fire. But I also want to carry one for range safety / emergencies, since fires at my primary shooting facility could be catastrophic (and is also why a full size shovel mandatory equipment when at the club range facility).

In my research online, the most common fire extinguisher mounting solution is on the roll bars of the cargo area. This is fine for utility, but I was wanting to get something close the the driver’s seat for very specific use cases (e.g. engine fire, cabin fire while trapped). I found a combination of Drake Off Road products that allowed for the mounting of a small fire extinguisher (e.g. 1.4lb capacity) to the seat rails.

Here is what it looks like after everything is installed, and seat all the way back: 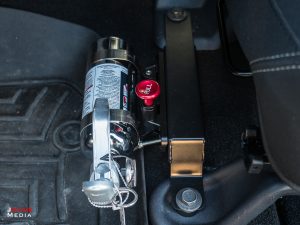 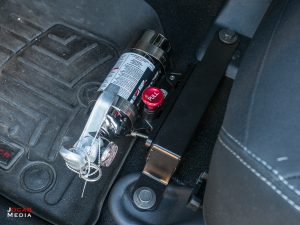 Here is what it looks like with the seat forward to my position (yes, I’m short): 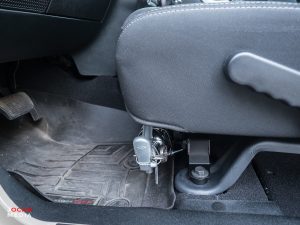 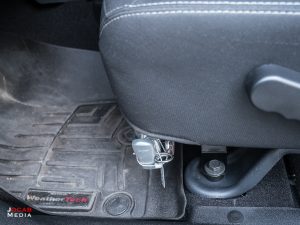 It’s nicely tucked out of the way for me, but there is a caveat with this setup. The Drake Off Floor Mount Bracket most likely will not be a direct fit with any 2013+ JK due to variations in the seat rails, such as plastic trim on the seat rails in some years. But it is actually not a big deal, at least for my specific 2018 Jeep JK Unlimited.

For my particularly vehicle, there is a bump on the seat rail mount point.

Note: I was corrected reddit that this is a weld for an alignment pin for the seat track assembly. 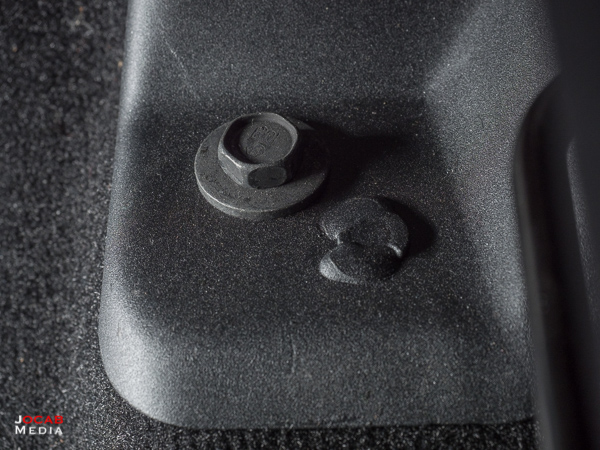 This bump gets in the way of the Drake bracket because it will not sit flush. 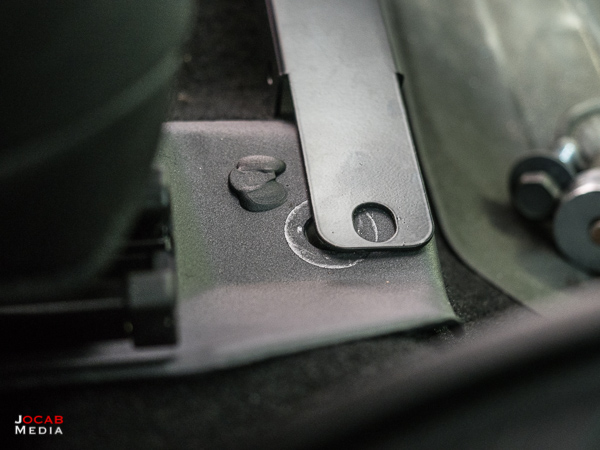 The simplest way to resolve this for my vehicle was to simply find a washer with a little bit of thickness that will clear the bump. Fortunately, I had a random washer in a tin of random spare fasteners that fit the application. I didn’t bother to measure the thickness of the washer, but a 1/4″ thick flat washer will probably suffice.

I ended up grinding one edge of the washer just so it looks more aesthetically pleasing on the exposed side / outer edge of the bracket. 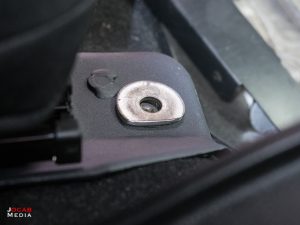 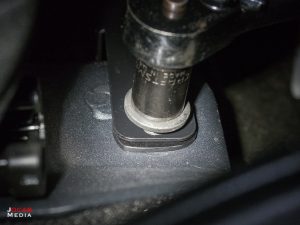 But that was pretty much all I needed to do. I had read on forums that the Drake Off Road Floor Mount Bracket required “significant modification” by some 2013+ JK owners to fit. All I can say is that my particular JKU did not require any significant modifications to the bracket. So if your JK seat rails look like mine, you should be able to get the Drake Off Road Floor Mount Bracket to fit with an additional washer from your local home improvement store. 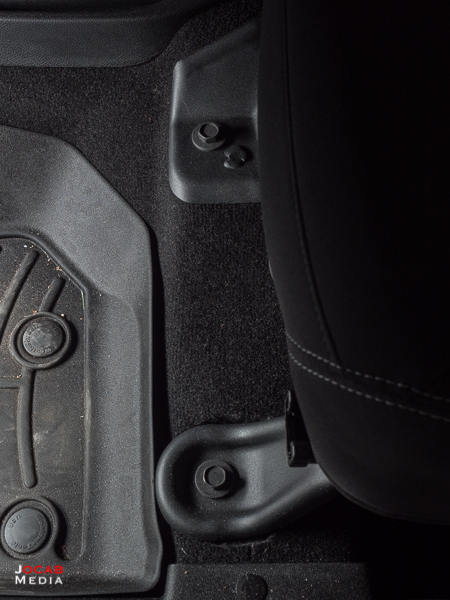 Anyway, I like the setup because it puts a small fire extinguisher in a position immediately accessible to the driver on the Drake Off Road Quick Release mount. 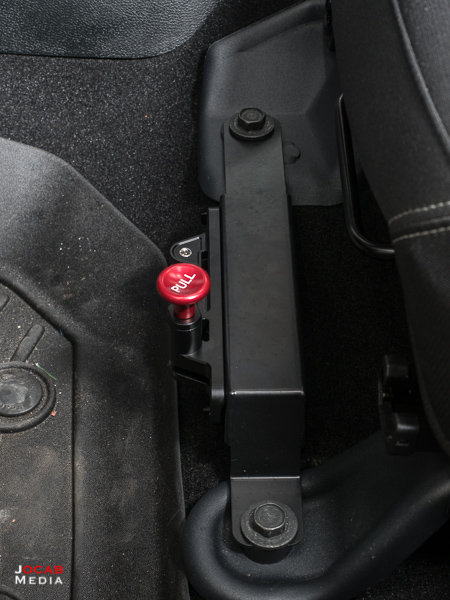 I did have to put some gaffers tape near the lock points of the bracket to eliminate rattle. I only needed gaffers tape on one side. Putting it on both sides would result in it being too thick to get back into the the mount. 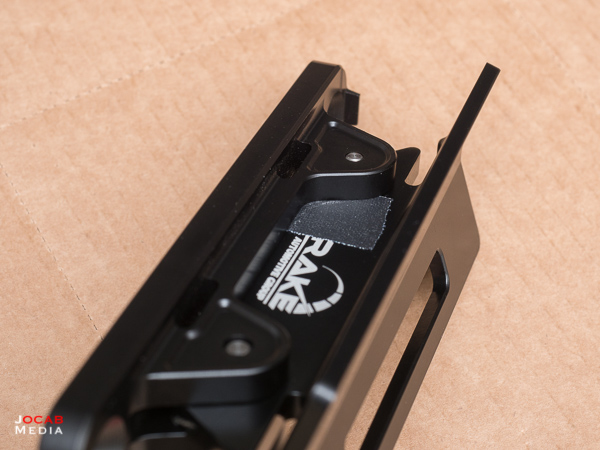 Also, while only once piece of gaffers tape is visible near the slotted point, I did put the second one close to the quick release pin hole. This eliminates any rattle noise.

One important note is the use of an H3R Performance HalGuard 1.4lb Clean Agent fire extinguisher. Most off-the-shelf fire extinguishers you find in stores consist of ABC dry chemical agent(s). Monoammonium phosphate or other ABC or BC dry chemicals are corrosive, and while they will put out liquid, gas, electrical, and other combustible material fires, the resulting agent will damage whatever it was sprayed on. Furthermore, the dry chemical agent can destroy electronics through thermal shock, static cling, and shorts because the chemical agent acts as a conductor.

Thus, having a fire extinguisher with a Halon equivalent is ideal for automotive use. The H3R Performance HalGuard fire extinguishers use Halotron 1, which is an electrically non-conductive “clean” extinguishing agent which quickly turns to gas. This means no electronics damage and minimal chemical residue left on the areas being sprayed.

Anyway, this is my current emergency fire extinguisher setup for my 2018 Jeep Wrangler JK Unlimited Rubicon. If you were looking at the Drake Off Road Floor Mount bracket, but were hesitant to try it because of the word of mouth about it not being compatible with 2013 and later JK’s, take another look at it. You might be able to get it to work without much effort. 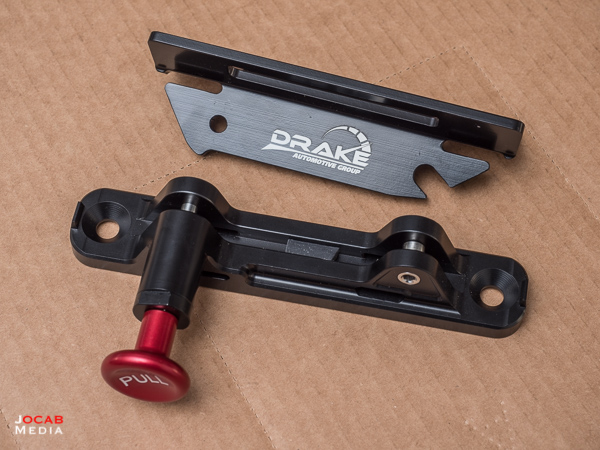