Back in SHOT Show 2010, I reported on the (then) new Leatherman MUT, or Military Utility Tool. Designed for military field use to support primary weapon (rifle/carbine) maintenance, the MUT looked to be a handy tool. After nearly four years, I finally picked up a MUT in black oxide for myself. 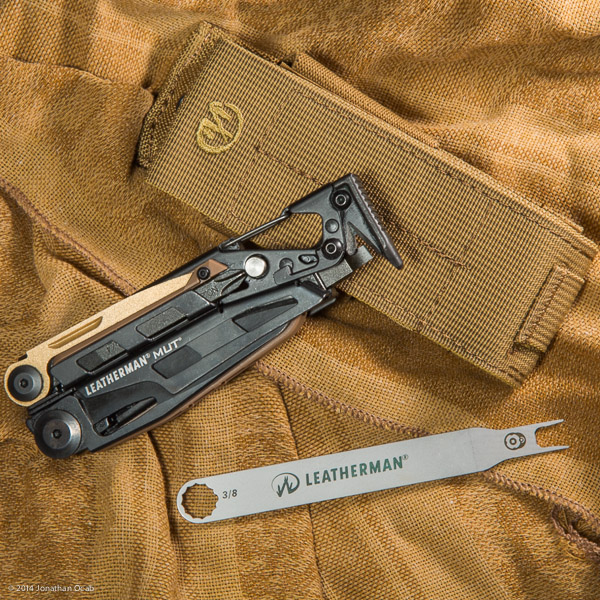 Since the MUT has been available on the retail market for over three years, the features and specifications for the MUT are widely known and there have been quite a few reviews written on the product. That said, I’ll try to give a fresh perspective in my review.

The MUT actually comes in two (2) variants, the MUT and the MUT EOD. The primary differences between the MUT and MUT EOD is that the EOD has features specifically for Explosive Ordnance Disposal personnel (milspec cap crimper, fuse wire cutters, C4 punch).

The standard MUT is what most people will want to purchase since it comes with the firearms disassembly punch which is more useful than a C4 punch for pretty much everyone out there. That is unless there are more people using C4 than I expected. 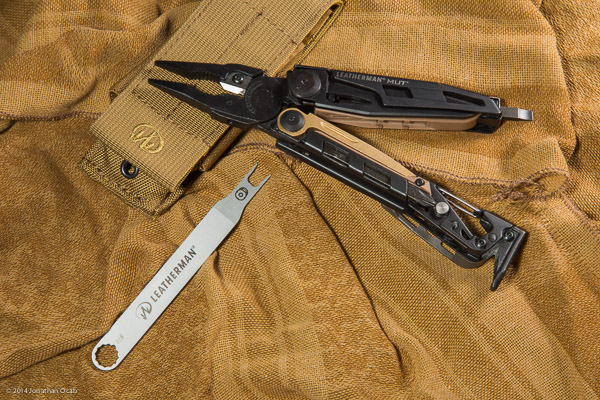 The MUT has 16 tools according to Leatherman’s count with the typical pliers, wire cutters, knife, and saw that we have come to expect from Leatherman multi-tools. 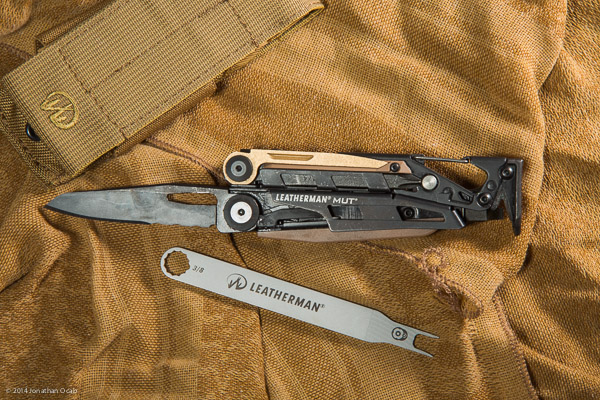 The features that the MUT adds for the firearm user are:

Leatherman also includes a MOLLE sheath as well as a supplementary wrench for a 3/8″ nut and A2 front sight adjustment.

I have a ‘range’ toolbox that pretty much carries all the stuff I use for most firearms maintenance. This includes cleaning supplies (solvents, oils, grease, bore brushes, all-purpose brushes, patches, cleaning jags) and cleaning tools (bore guides, scrapers, chamber brush handles), as well as miscellaneous tools including drivers and driver bits, hex wrenches, and pliers. Then I have lots of specific tools like headspace gauges, bolt disassembly tools, throat and muzzle gauges, etc. 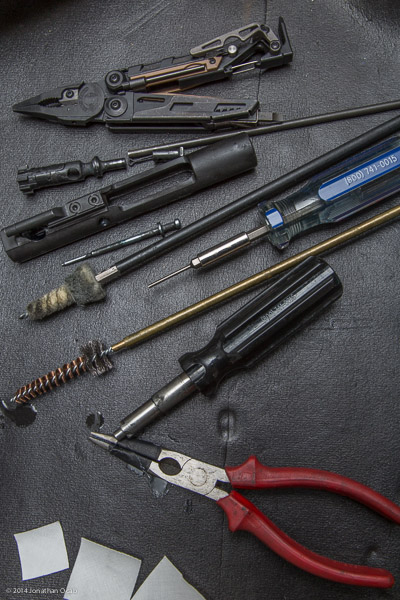 Of course, carrying around a toolbox can be tedious, not to mention unfeasible in many situations. There are times when you can’t get to your toolbox quickly enough, or at all.

This is where a multi-tool can be handy and gives legitimacy to the MUT for anyone who has to maintain a firearm.

In my opinion, the MUT is actually well thought out. The design is sound and you would expect it to be since Leatherman has been producing multi-tools for decades. But there are little details that make you think, “This multi-tool is well designed.”

For example, the retention of the two Phillips+Flathead bits is based on a toggled button release. There’s a button that holds both bits on adjacent sides of the handle, and if you need to use one, you simply push the pusher in to clear the channel to allow the respective bit to be dropped out of the handle. 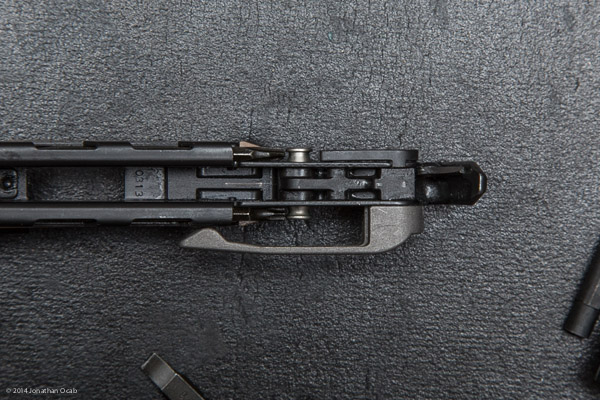 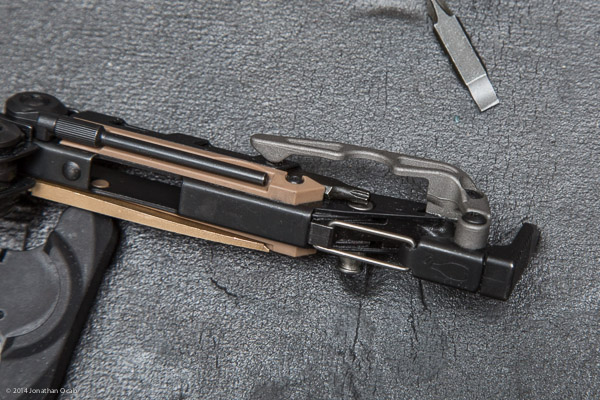 The short Phillips and flathead bit doubles as a safety for the cutting hook when the bit is stored in the bit driver slot. As you can see in the photo below, it helps to mitigate items (e.g. fingers) from being errantly cut by the cutting hook. 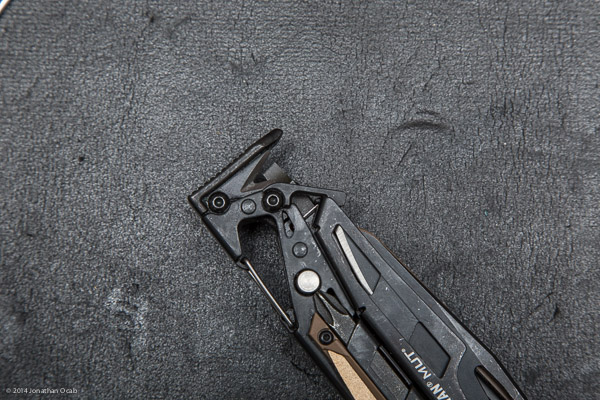 Also, there’s also a security latch that can be engaged or left disengaged as the user sees fit. The security latch keeps the handles locked together so they don’t spread open. 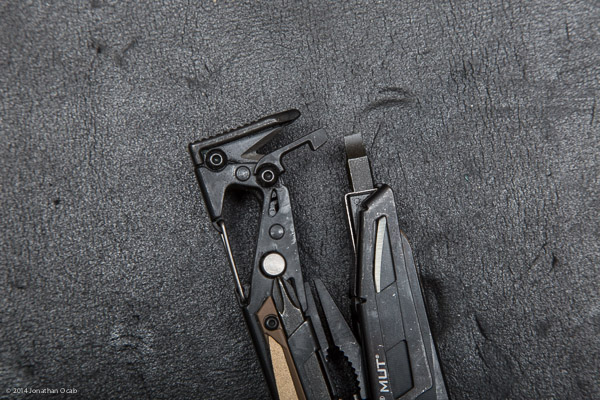 I feel that all of the different tools on the MUT are worthwhile, but the one that I find very useful is the bronze carbon scraper.

The bronze carbon scraper has varying angles and bevels across the length of the scraper that make it very versatile for cleaning out carbon crud in various crevices and off various surfaces, especially on an AR-15 bolt and bolt carrier. 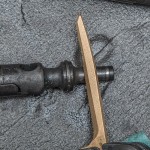 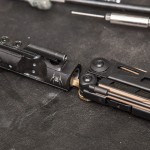 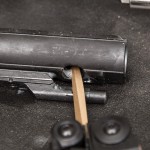 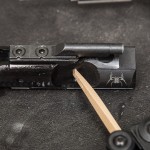 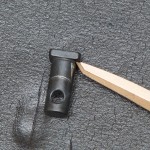 As a matter of fact, the way the scraper is designed, I actually find it to be something I would want to use all the time, even with all the tools in my current toolbox.

The firearm disassembly punch is fairly useful, although it’s probably more useful for Glocks since it is the correct size for Glock disassembly (e.g. frame pins), and whenever I use punches for the AR, I usually need specific punches (e.g. roll pin). 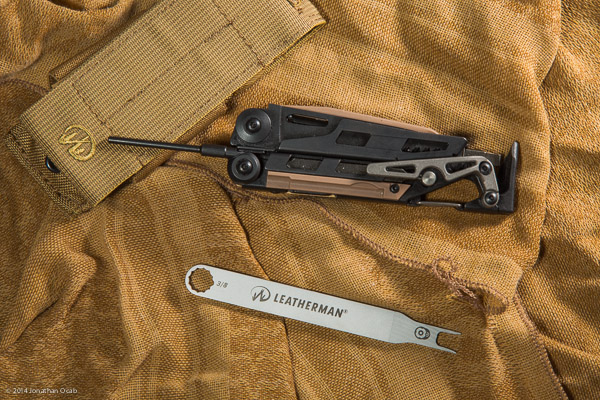 I do have a couple of nitpicky criticisms.

One is the #8-32 adapter in the handle. While this makes total sense from a emergency/field use standpoint, unless things have changed, the old school USGI cleaning kit with the segmented rods use an #8-36 thread, which doesn’t fit the adapter in the MUT. The current USGI cleaning kits that I believe are being issued to military personnel are Otis kits, which are based on a pull through cable design. So technically, military personnel using the MUT in the field probably wouldn’t be able to use the #8-32 adapter with issued cleaning equipment.

Although, Kleen-Bore makes a sectional rod similar to the USGI cleaning rod, but with the ‘commercial’ and more prevalent #8-32 thread standard. 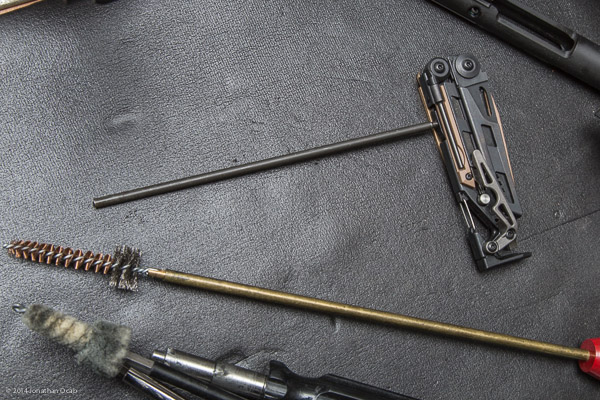 NOTE: I want to make it very clear that I DO NOT condone the use of a sectional steel rod like the USGI (USGI-style) cleaning rod for routine cleaning. Sectional rods can break, are susceptible to flex, and are likely to damage the bore specifically when not used with a bore guide. You should only use a quality single-piece cleaning rod (e.g. Dewey, Pro-Shot) for regular cleaning. USGI/USGI-style rods should only be used in emergency or field situations where you must clean and cannot get to a single-piece cleaning rod. Even then, the Otis pull-through cleaning systems are a safer choice for cleaning than a sectional rod.

Perhaps Leatherman could have included both an #8-32 and an #8-36 adapter threading to cover both commercial and USGI sectional cleaning rods threads.

The one other nitpick I have are the plastic parts. While the MUT is made out of steel and bronze, there are three plastic or nylon pieces on tool. Two are ‘guards’ for the bronze carbon scraper and firearms disassembly punch tools while they are in the closed position, and a third piece appears to be a slot to hold an additional (Leatherman proprietary dimensions) driver bit. 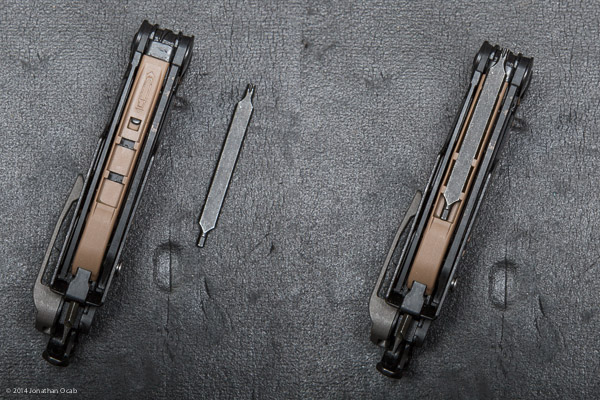 In my searches on the web, I came across a few instances where these plastic pieces have cracked and needed to be replaced. I sort of understand plastic for the driver bit holder/sleeve. But I feel that the two ‘guards’ for the scraper and punch could have been made out of metal. 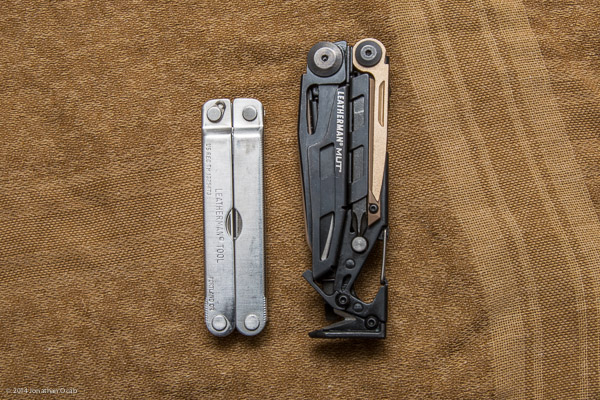 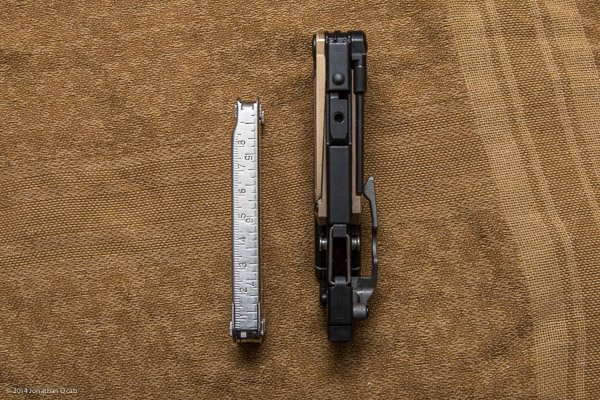 So basically, the MUT weights more than twice as much as the PST and is an inch longer, not to mention thicker and wider. Granted, this is the evolution of a multi-tool when you add more features.

Also, the Leatherman MUT isn’t cheap compared to other Leatherman multi-tools at a street price of roughly $150 give or take $25 depending on what vendor you go to.

All this said, would I recommend the MUT?

The only useful tool is the one that you have at your immediate disposal. If you’re like me with a portable toolbox of firearms related maintenance tools, a MUT is redundant. But redundancy is a good thing in a world where things malfunction or break.

Also, the MUT goes where my 20lb+ toolbox cannot go and can stay on the operator via built-in clip to a belt, via MOLLE gear thanks to the provided MOLLE sheath, or via other deployment gear that an operator may be using.

If you’re an avid shooter and/or someone that goes into the field with a firearm, the Leatherman MUT is a worthwhile addition to your carry gear. 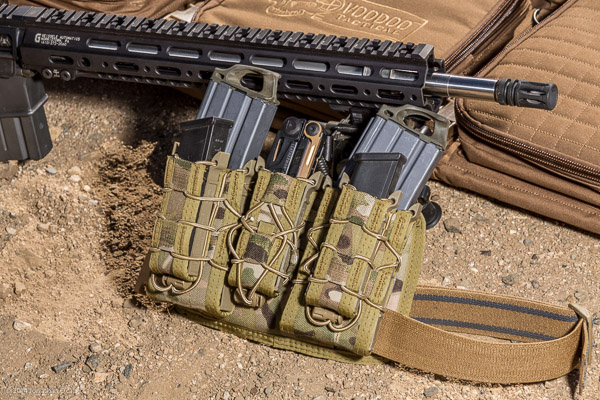