I was looking to get another octabox from Paul C. Buff (PCB) after I acquired my second studio strobe (Paul C. Buff Einstein 640). At the last couple of the last group photo shoots I attended, I got a first-hand look at one of the new Parabolic Light Modifiers (PLM v2) by Paul C. Buff.

I had already known about the PLM via the Alien Bees web site. But after seeing the PLM in person and the lighting results being achieved with it, I decided to forgo a new octabox and get the PLM instead. I opted for the 64″ silver PLM which is the ‘medium’ sized PLM available (51″ and 86″ being the other two sizes).

While the quality of light users were getting with the PLM was a factor in me opting for the PLM over another octabox, the price of the PLM equally weighed in. The 64″ PLM is currently priced at $59.95 and the front diffusion fabric (which turns the PLM’s umbrella-style light into a softbox-style light) is $17.95 (for the 64″). The 47″ octabox from PCB is $170. That makes it $78 for the PLM+diffuser vs $170 for the octabox.

You can see why I decided to try out the PLM.

I placed the order last month and the PLM v2 was on backorder at the time. But last week I received an email notice that PCB shipped it and I just recently received the PLM via UPS.

Upon first glance, the PLM appears to be a glorified umbrella and it can actually be used as such. 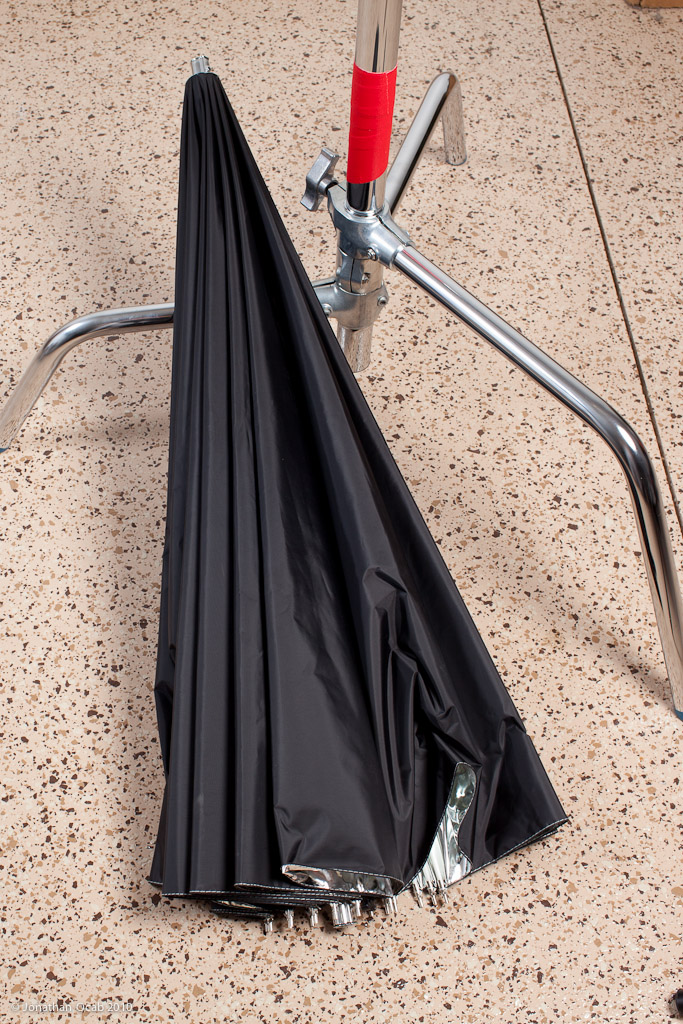 But the design has significantly more ribs (16) than your typical umbrella, and I purchased the PLM with the speed ring for PCB strobes which places the light dead center of the PLM.

The silver PLM without the diffusion sock is basically a very big umbrella. According to the PCB product page, the light pattern will be similar to a 40 degree reflector.

While this might be desirable in certain situation, I wanted a softbox-style of lighting, which is why I also purchased the front diffuser fabric which basically covers the reflective side of the PLM completely to create a virtual softbox. 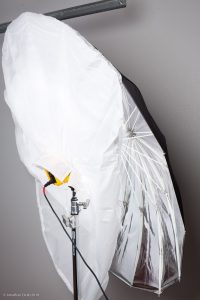 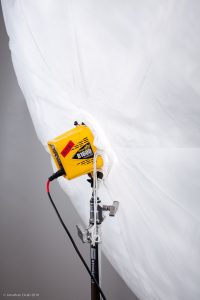 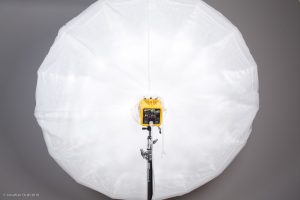 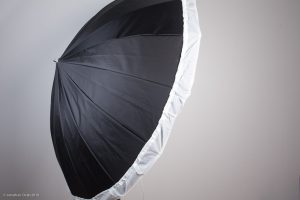 I also took a couple of side-by-side shots of the PLM with the PCB 47″ octabox.

My initial “just out of the box” thoughts? The PLM folds down to a thinner form factor than the folded down octabox, which is a plus. Though the extraneous speed ring adapter is another item to keep track of when taking the PLM to a shoot.

The PLM is fairly light (compared to the octabox) and the ribs appear to be plastic. This does bring some doubt as to the fragility of the PLM. Granted, you can’t ask for much durability out of an umbrella. Repeated usage will determine the durability.

The size of the PLM makes me concerned about using it outdoors. I’ve used the 47″ octabox outdoors on numerous occasions with at most a 5mph wind. Even with the light stand weighted down with the Vagabond II power pack (22+ lbs), there is the concern of light getting turned by the wind. I’ve had this happen a number of times with the 47″ octabox, which is why I modified one of my light stand adapter studs. The bigger size of the 64″ PLM exacerbates this issue. I definitely wouldn’t want to use the PLM outdoors without the diffuser panel because the PLM would basically become a kite and catch wind more easily. I anticipate using the PLM with a light on a C-stand if using it outdoors.

As far as the actual light effect itself, I need to put the PLM to actual use before I can provide info on first-hand experience. I anticipate this will be a great modifier and I hope to put it to good use in the very near future. When I do, I’ll post an addendum either as an update to this article, or as a separate news entry (with sample photos, of course).