Even though I already use my existing Canon Speedlite and Paul C Buff flash units / strobes with Olympus Micro Four Thirds, I discovered the Elinchrom EL-Skyport Plus HS wireless trigger which provides Hi-Sync capabilities with certain Elinchrom lights, and is made for Olympus (and Micro Four Thirds). Hi-Sync is essentially a way to use flash at high shutter speeds (faster than camera sync speed).

Hi-Sync is not the same as High Speed Sync. While the end goal / result is the same, how each accomplishes flash with high shutter speed is very different. Reference link comparing the two are at the end of the this article.

I had no luck with PocketWizard Hypersync on the Canon platform with Paul C Buff Einstein E640 strobes (works with B1600, though), but was willing to risk some money on trying Elinchrom’s solution on the Olympus MFT platform.

So I picked up one of the Elnchrom EL-Skyport Plus HS units and an Elinchrom D-Lite RX 4 light. 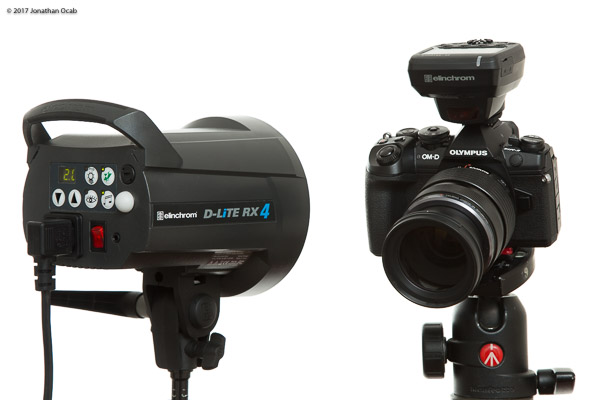 Elinchrom has published content providing guidance on setting up Hi-Sync, but straight out of the box without any customization, I was able to get 1/8000s exposures using the EL-Skyport Plus HS and the D-Lite RX 4 with no shutter clipping. 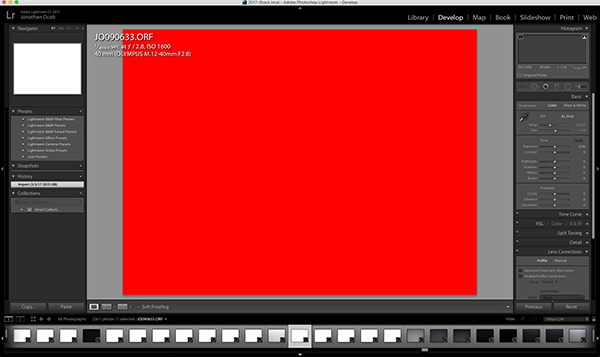 The above screenshot is of one of the straight out of the box test photos in Adobe Lightroom. I basically pointed the strobe at a relative white wall. I then took photos of the wall at 1/8000s. Aperture was set to f/2.8 with ISO 1600 to guarantee the highlights will be clipped or blown out. If any black appears in the frame, that would indicate the shutter clipped the exposure and Hi-Sync did not work. So the above photo provides evidence Hi-Sync works. Clipped shadows and clipped highlights show up as blue and red, respectively, in my Lightroom configuration whenever I toggle the ‘J’ key.

When I was tweaking the ODS with the earlier firmware, I didn’t recall ODS making a difference (at least from what I remember), but it seems like it does in v1.1. ODS settings are going to vary between every individual camera, so you need to test ODS on your own. You cannot just use someone else’s ODS setting for their camera, even if it is the same model as yours.

When I adjusted ODS, I simply pointed the flash on a white wall and took several exposures using different ODS values, and compared the blown whites on frame and histogram between each exposure. 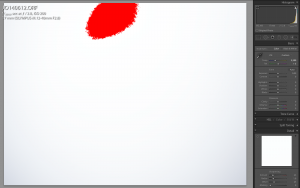 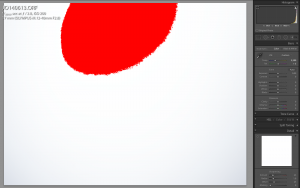 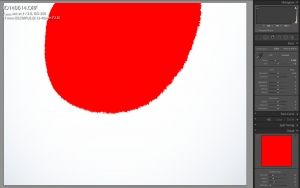 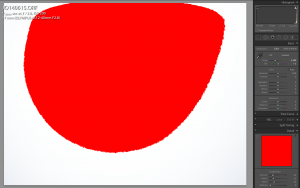 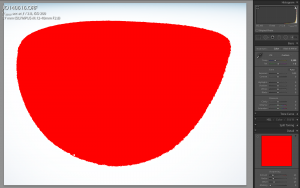 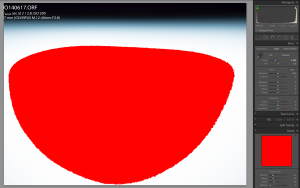 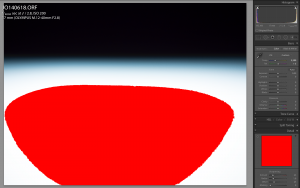 As you can see in the above Lightroom screen captures with test shots with different ODS values, the effect of the flash in frame is more effective as the ODS value is increased, but begins to fall off after ODS value of 1.0. With ODS 1.3, you begin to see the drop in light at the top of the frame. ODS 1.6 is evident that the light is no longer beating the shutter curtain. 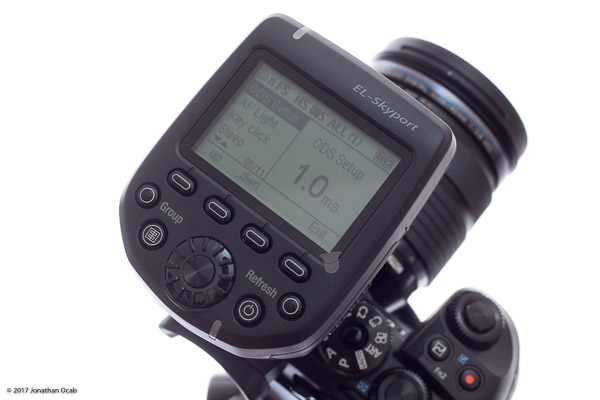 Also, one of the other features of the Skyport system is the ability to remotely control the power of the strobe (which I do have with the PowerWizards between a Canon dSLR and Paul C Buff Einstein units). The Skyport system works flawlessly in this regard for the Olympus MFT and the Elinchrom D-Lite RX 4. 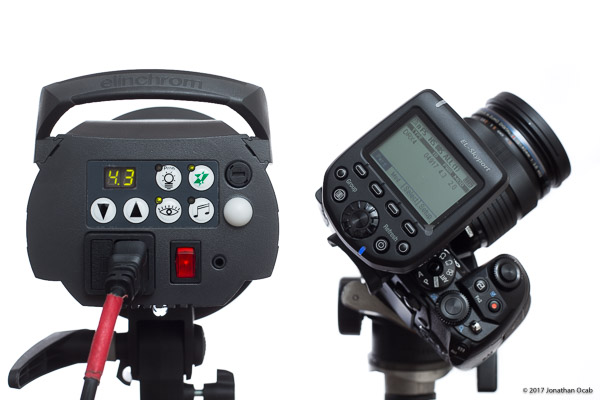 With excellent out of the box results, I am quite happy with the Elinchrom solution for flash at high shutter speeds. If anything, the D-Lite RX 4 is too powerful when trying to utilize large aperture (e.g. f/1.2 or f/1.8).

It only goes down to 25 watt-seconds (and goes up to 400 watt-seconds). Even with diffusers, 25ws might cause hot spots on the subject at large apertures such as f/1.2. The only recourses are to distance the light from the subject (which may not be desirable if you are going for a specific effect), neutral density gel the light (may not be feasible), or run an ND filter on the lens. Granted, one point for running a HSS/HS capable system is so you don’t have to use an ND filter, so this can be a bit annoying. But all things considering, with a working Hi-Sync platform, having too powerful a light at large apertures can be a nit picky complaint.

The Elinchrom D-Lite RX 4 is the least expensive Hi-Sync capable light. The Elinchrom ELB 400 system with a Quadra HS head can drop as low as 7 watt-seconds, but the ELB 400 with a single Quadra HS head is just a shade below $1800. For now, a D-Lite RX 4 at $400 in conjunction with my existing Paul C Buff Vagabond Mini Lithium power system ($240) is a more economical system. 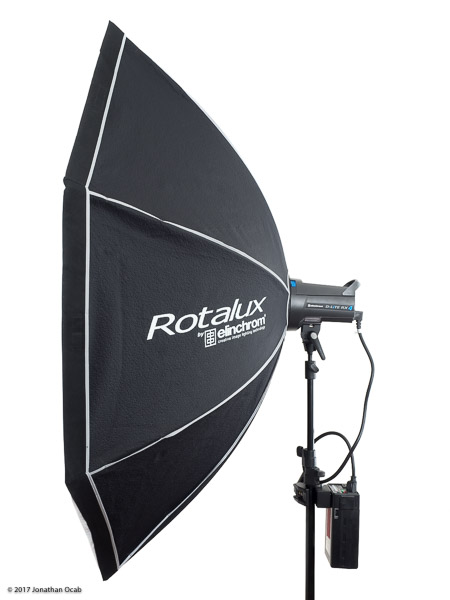 The above photo is an example of Elinchrom Hi-Sync in action, exposure settings of 1/3200s at f/1.2 and ISO 64 with a focal length of 42.5mm, with the sun above and behind the model.

I think Elinchrom Hi-Sync is very promising and the fact that it actually works compared to the PocketWizard Control-TL HyperSync technology and Paul C Buff Einstein E640 units gives me a favorable impression of Elinchrom on the Micro Four Thirds platform.

So while the D-Lite RX 4 ‘only’ has 400 watt-seconds maximum power, the fact that it can work beyond your camera’s sync speed means it can still “overpower” the sun. From a studio standpoint, 400 watt-seconds is more than enough. Thus, I have no problem recommending the D-Lite RX 4 for anyone with Micro Four Thirds and wanting to get into off-camera flash. 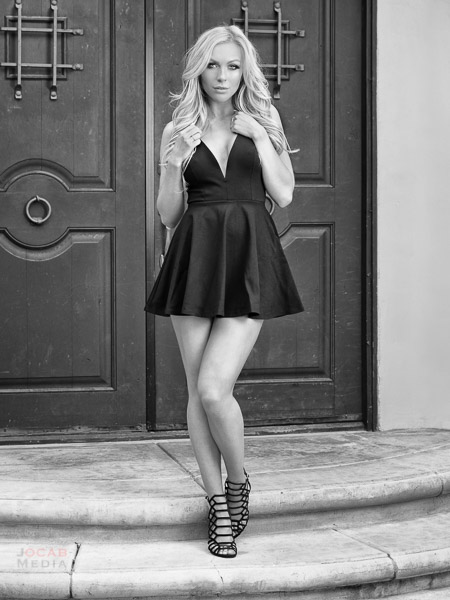 Of course, some people want to go the ‘strobist’ route and run small flash (e.g. Speedlite / Speedlight sized flash) which can theoretically be a lot cheaper. In which case, a monolight platform like the Elinchrom D-Lite may not be desirable for those folks. 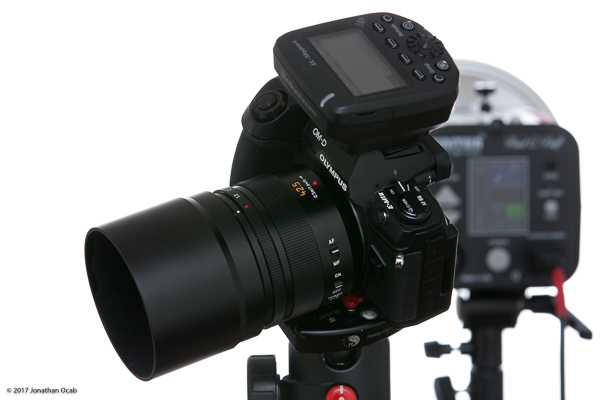 I personally do not make much use of TTL. I almost always use manual and set accordingly.

But even those who want TTL should keep a close eye on Elinchrom. The Skyport system did not support Hi-Sync until they added it with a Skyport revision. It is quite possible that Elinchrom will add TTL to the Skyport system via firmware upgrades.

I am actually considering getting another D-Lite RX 4 to have a portable two-light Hi-Sync capable setup for use with my Olympus Micro Four Thirds kit. But I am going to wait and see if Elinchrom releases another D-Lite or monolight that has a lower minimum watt-second output and is Hi-Sync compatible. 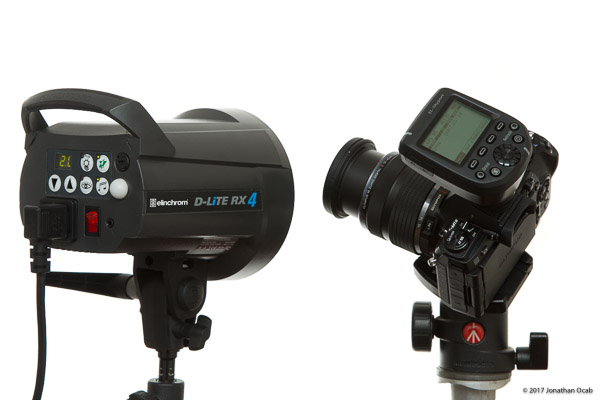 For more information on Elinchrom Hi-Sync, I highly recommend reading the following articles on the Elinchrom website: