When people are looking into getting their first studio strobe, they always get caught up in spending a lot of time researching remote triggers. Most see Pocket Wizards first, but then balk at the prices. PocketWizard Plus II units are about $170 each and you need at least two; one to transmit and one to receive. Sometimes people gravitate towards the Chinese made generic triggers, and have good luck with them.

But it amazes me how people do not realize that there is a very cheap option to trigger a strobe: a PC-Sync cord.

The PC-Sync form factor was designed to allow for flash synchronization between a camera’s shutter and the electronic flash/strobe.

Pretty much every studio strobe you can buy will have a corresponding jack that you will connect your camera to via a PC-Sync cord. If you buy a Paul C Buff strobe (Alien Bees or Einstein), PCB bundles a 12 foot PC-Sync cord with each strobe. You basically have a trigger out of the box assuming your camera has a PC-Sync port. 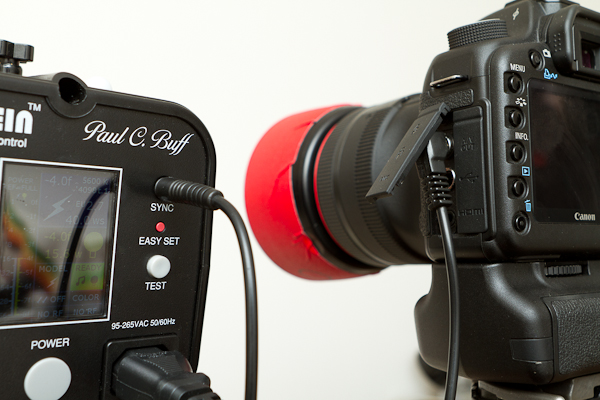 Most mid-range and upper-tier dSLR bodies have a PC-socket on the camera. If it doesn’t, there are camera hot-shoe adapters [flashzebra.com] that will add a PC-Sync port to your camera body via the hot-shoe.

What if you have more than one strobe? Well, you can still use a PC-Sync cord to trigger one of the lights (whichever one you’re closest to, more often your primary/key light), but most major strobes will have what is known as an optical sensor, which will trigger the strobe when it detects the flash of another strobe. So if you had say two Alien Bees strobes, with your camera plugged into one via the PC-Sync port, when you take a photo, your camera triggers the one it’s plugged into, which in turn triggers the other strobe via the light flash. Yes, this works just as well as radio triggers (it does operate at the speed of light, after all). Of course, there are limitations to the optical trigger (e.g. range, flaky performance outdoors in bright sunlight), but it’s an option.

That said, if you are buying your first studio strobe, don’t get caught up spending in radio triggers in the outset. Use a PC-Sync cord to get shooting immediately and not have to worry about spending potentially hundreds of dollars on radio triggers when you don’t really need them.

Even if you use radio triggers, you should still carry a long PC-Sync cord in your camera bag or with your strobe. It makes a great backup if something goes wrong when you’re on location. Maybe the batteries in your triggers died. Or perhaps one or more of your radio triggers break. Or you could be on location with other photographers and can’t find a channel that isn’t being used by someone else. I keep a 12 foot PC-Sync cord in my main camera backpack (Think Tank Photo Streetwalker Pro) and another one in my photo rollerbag (Think Tank Photo Airport International v2).