I have only made a couple of minuscule changes on my Remington 700 ATAICS rifle since my previous project update, but I wanted to write an update to the project to discuss some relevant data I gathered regarding the rifle after taking it out to Range 117A at Marine Corps Base Camp Pendleton this past weekend.

The venue was an NRA Long Range 3×1000 match held by the Santa Margarita Gun Club. While it was an actual match, I attended to get zero data as well as develop DOPE (data on previous engagement) for my handloads in this rifle, particularly since I had not shot this rifle at 1000 yards up until that point. 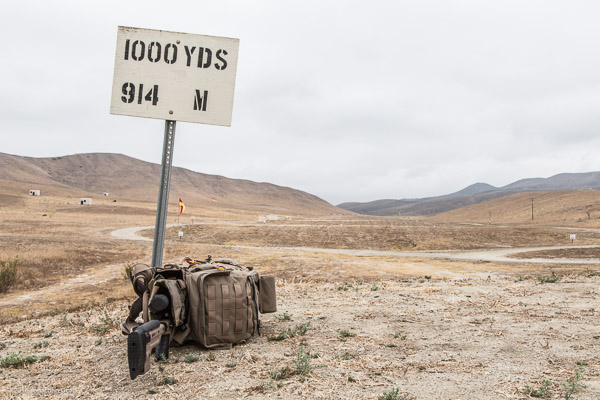 I ended up shooting different ammo on each of the three stages of fire:

My goals were to get elevation data for my handloads (#1 and #2) as well as see the elevation zero differences between them given the 100 fps muzzle velocity difference. I also wanted to try the IMI 175gr Match ammunition because it seemed to group well enough at 100 yards (1 MOA), so I wanted to see how it held up at 1000 yards (to see if it would be a viable alternative in an ’emergency’ situation where I needed to use a factory load).

I used the Vortex Optics Long Range Ballistics Calculator (LBRC) web application to create some ballistic drop data in advance. I wrote this data down and keep index cards in my bag. I know that there are ballistic data / calculator smartphone applications, but I prefer to have stuff written down and not have to rely on my iPhone while shooting.

According to the Vortex Optics LRBC generated chart, I would need about 9.6 MRAD up elevation from my 100 zero. I dialed 10.0 MRAD thinking I might fall short / low, and it end up being high. So I dialed down to 9.6 MRAD and it was actually hitting in the 10-ring. But during the string, I was having point of impact elevation issues. My wind calls were solid, but I was hitting high and low in the 9-ring. I eventually walked off the line (finished the string) with 9.4 MRAD on the scope.

I equated my up and down string on a couple factors. One being my follow through on recoil. I was using a Str8Laced Ultra light Rear Bag (produced by Tab Gear), but I am not entirely sure my technique with using the Tab Gear bag for rear support is sound and it feels like my rifle is recoiling up (sight picture of scope goes above target on recoil). Then there is also barrel temperature. I feel like as my barrel heats up, my point of impact rises, which could be correlated to barrel harmonics as well as heat coming off the barrel and affecting the sight picture.

Either way, the 9.6 MRAD for 1000 yards on the Vortex Optics LRBC generated chart is pretty accurate.

My second string of fire was shot with the 175gr Berger moving at 2660fps.

The LRBC chart indicated a ~10.5 MRAD drop from my 100 yard zero. So I dialed 10.5 MRAD on the scope, took my sighters, and 10.5 MRAD elevation ended up being what I remained at during the entire string of fire.

It looks like the Vortex Optics LRBC web application works quite nicely. I actually used it to generate data before a 3×600 Mid-Range match and it was slightly off with regards to zero. It said I needed ~4.3 MRAD from my 100 yard zero for 600 yards, but I ended up using 4.5 MRAD elevation during two different matches. So I was pleasantly surprised to see the 1000 yard data to be quite precise.

The accuracy of the data could also take into account that the LRBC may have factored in reliable weather data for the location in question.

The LRBC allows you to specific a location using the Google Maps API and it will get weather data for a given date in time, as well as the elevation above sea level for the location specified. Note the above screenshot was created after the match in question, so the weather data should be accurate, and the Google Map API provided 400 feet elevation to LRBC for the 1000 yard firing line at Range 117A.

Then on my third string, I used the IMI / Razor Core 7.62mm NATO 175gr Match ammunition. 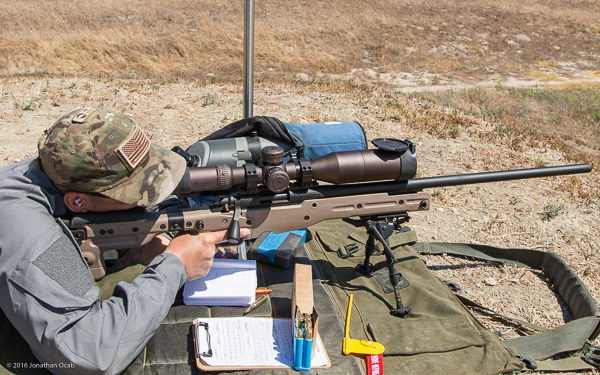 I had fired this on the 100 yard line at the West End Gun Club shooting facility and it seemed to group within 1MOA, so I wanted to get some data on it at 1000 yards. Unfortunately, the IMI 175gr shot all over the place. I actually had shots that went outside the black and the bulk of the shots went all over the target. 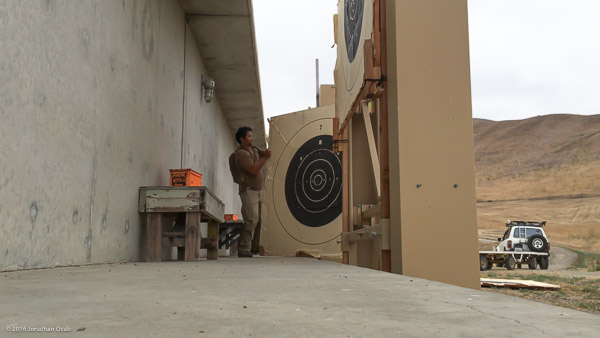 Note that the F-Class target is essentially the same as the official NRA LR target (44 inch aiming black), but the rings are smaller. 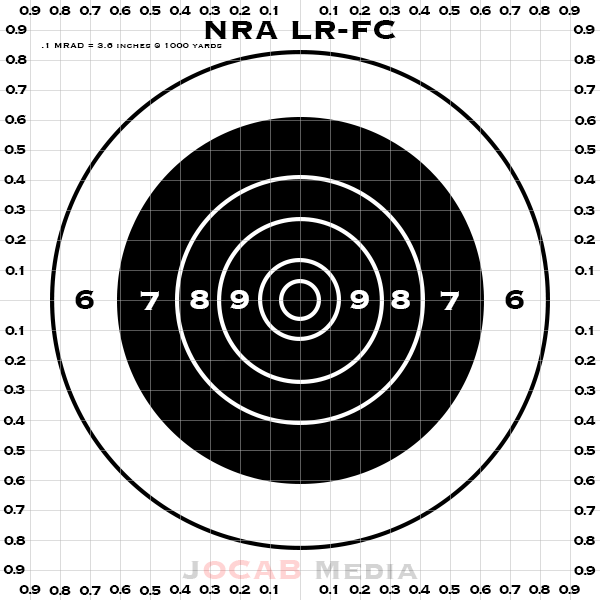 The fact that the IMI 175gr match factory ammunition couldn’t hold in the 9-ring, much less hold black for the entire string renders it a useless factory alternative for my rifle, except for short to perhaps mid-range practice.

Now as far as the minor rifle parts tweaks I had mentioned at the beginning of this update article, I swapped out the factory cheek rest with a Victor Company Grippy Cheek Rest. 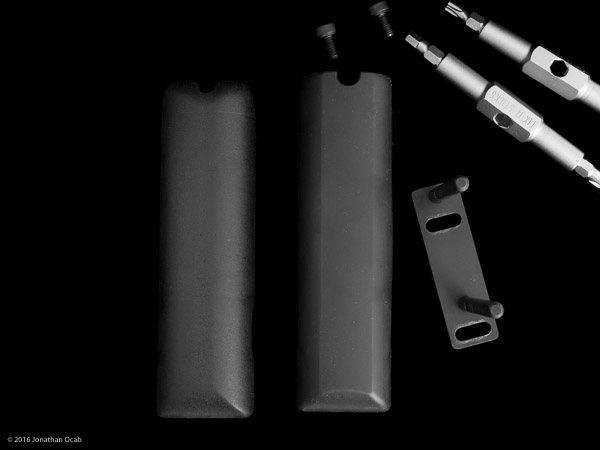 This is essentially a cheek rest with the same dimensions, but made out of a outer material. The OEM cheek rest is a very hard plastic and is quite slick if wet (e.g. sweat), and I found my face slipping on the cheek rest easily. The Victor Company Grippy Cheek Rest has a rubber coating that allows for better grip against the skin. This was more of a comfort change and I had this installed on the rifle before I attended the aforementioned NRA Long Range 3×1000 event.

The other change I made took place after the match. I swapped out the Accuracy International bottom sling stud with a Picatinny rail (AI part number: 25848 PB). 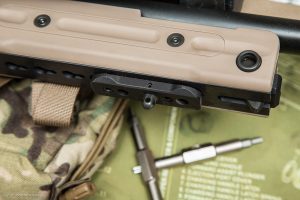 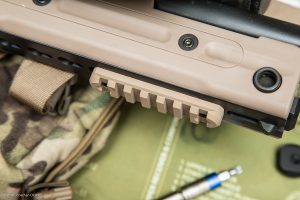 I already have an American Defense Manufacturing AD-BP Harris Bipod mount which is essentially a bipod stud to Picatinny mount. I use this to get a Harris Bipod to attach to an AR-15 platform that has a Picatinny rail on the 6 o’clock panel of the handguard. 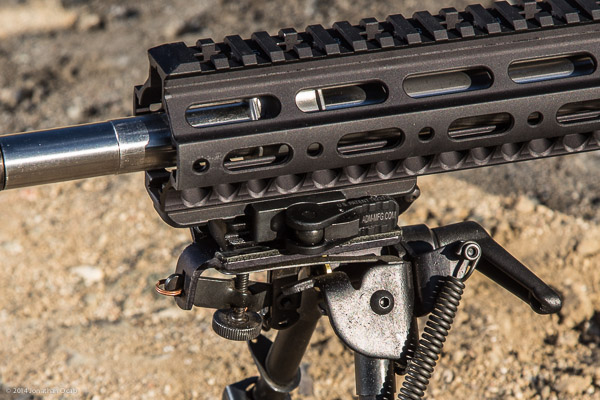 Since I already have this, all I needed was a Picatinny rail on the bottom of the ATAICS forend in order to use the quick attach/detach capability of the AD-BP mount. 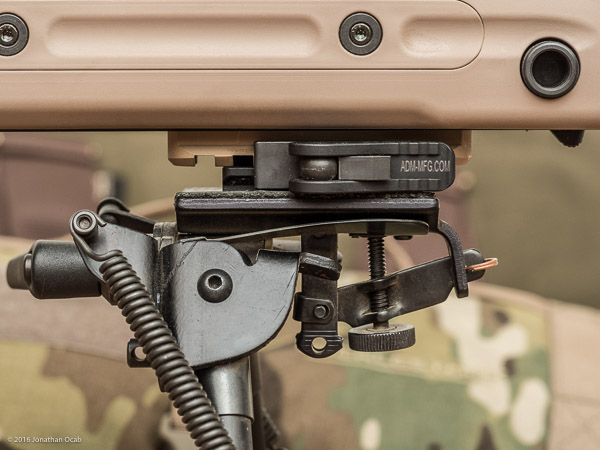 Anyway, this is my ‘update’ to my Remington 700 ATAICS precision rifle project. Even though the parts upgrade are not all that significant, it is a relevant update in that I was able to acquire a 1000 yard DOPE for the rifle platform using two different loads that I will most likely use depending on powder availability (AR-Comp is more readily available / in-stock compared too Varget).

For more information on the NRA Long Range 3×1000 match in question, watch Episode #014 of my Range VLOG.