A bipod is a common accessory for the precision rifle platform, and the Harris Bipod is arguably the most well-known and most commonly seen bipod. 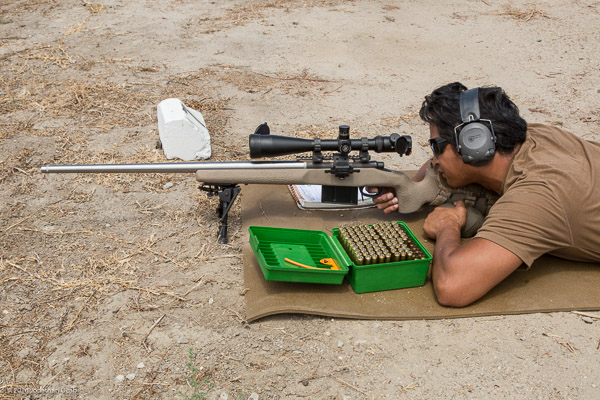 The Harris Bipod has been around for a long time, and the design is predicated on clamping to a sling swivel stud on the forend of the rifle. This design is becoming a bit dated in that modern chassis systems are utilizing Picatinny rails for accessory attachments.

While a good number of shooters still make use of traditional stocks with forend sling studs, even these stocks are being produced with options for non-sling swivel stud bipod attachments.

Tripod shooting is becoming a widely practiced and utilized method of supported shooting, and traditional photography tripod gear has been adapted to precision shooting. Really Right Stuff tripod accessories are primarily based on Arca-Swiss dovetails, and the fact that RRS has been well received in the precision shooting market has helped make Arca-Swiss dovetails become a viable ‘standard’ for firearms accessories.

My 2017 precision rifle project utilizes the Masterpiece Arms BA Competition chassis, which comes with an Arca-Swiss dovetail machined into the full length of the forend. 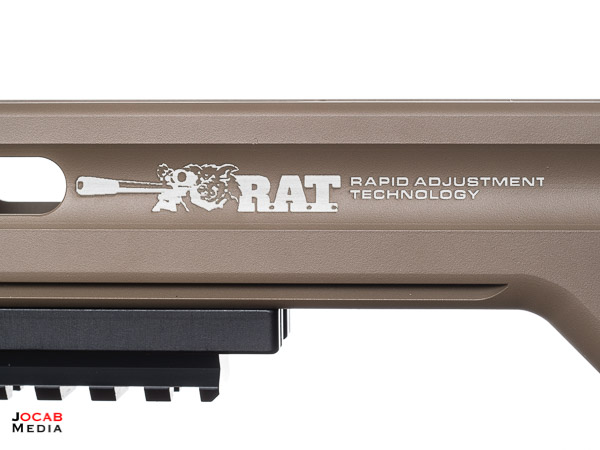 But even though MPA machined an Arca-Swiss dovetail into the forend, they still have Picatinny rails on the forend for attaching accessories such as a bipod. 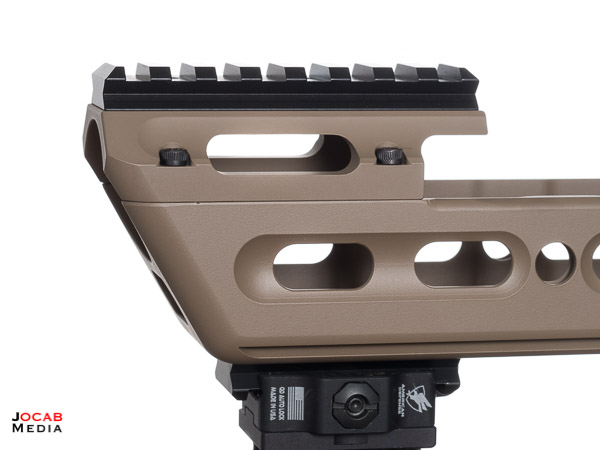 While the Mausingfield project was in the process of being built (e.g. gunsmith barreling), I was debating on whether or not to go with an Atlas Bipod or a Harris Bipod for this rifle, either one utilizing the Picatinny rail.

But a couple months ago, Really Right Stuff released an adapter for the Atlas Bipod that would directly attach to many of the RRS clamps. This put me in a slight dilemma because I was leaning towards going back to a Harris (having bought an Atlas Bipod for my Remington 700 in an AICS), since I fell out of love with the Atlas and find the Harris to feel better. But the fact there was an option use the Atlas Bipod with an Arca-Swiss dovetail was enough to pull me back towards that solution.

Then the Kinetic Research Group (KRG) announced their own Harris Bipod direct mount adapter which would interface with the KRG Arca-Swiss clamp. I was ready to adopt this item so I could use the Harris, and then out of nowhere, Really Right Stuff released two Harris Bipod adapters in the past few weeks which facilitate the use of a Harris Bipod with an Arca-Swiss dovetail.

The RRS HCA should work with any Harris Bipod model. I opted to put one on a Harris Bipod S-BRM. This is probably the most popular of the Harris Bipod models, with a 6-9″ height range, notched legs, and a swivel base to cant the rifle for leveling if necessary. 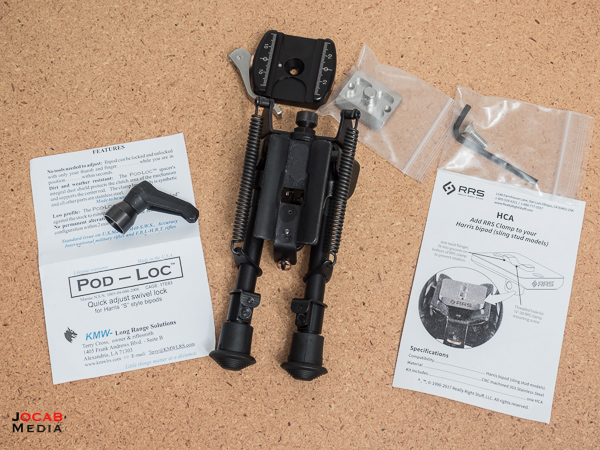 As you can see above, I also use a KMW Pod-Loc, which I feel is a necessary add-on for any swivel base Harris Bipod.

The Harris Clamp Adapter functions very much like the American Defense Manufacturing Harris Bipod Adapter. The HCA is a small plate that has what equates to a sling swivel stud on one side. 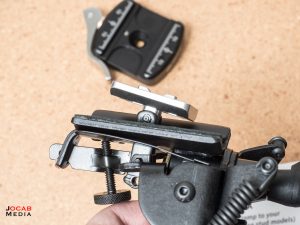 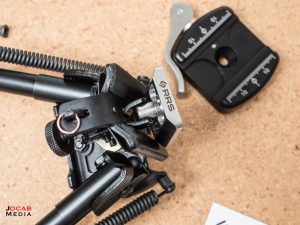 The opposite side has the keyed interface that fits with many of the Really Right Stuff clamps, including lever release and screw knob style. As you can see, I opted for the lever release clamp.

NOTE: Not all Arca-Swiss dovetails are the same. A non-adjustable lever release clamp like the Really Right Stuff design may not close correctly on your mount point if it is not within specification. More on this issue at the end of this article. 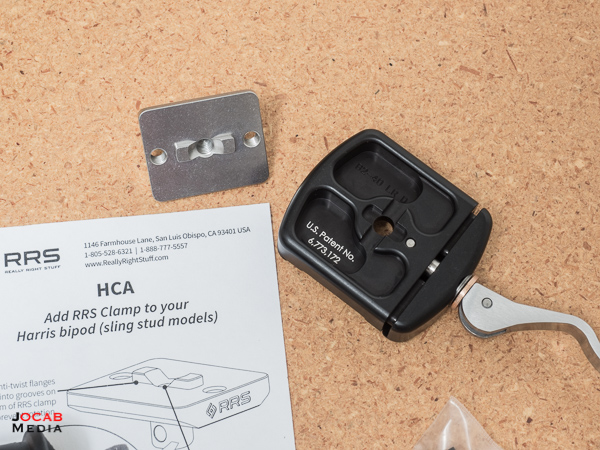 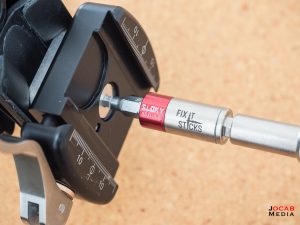 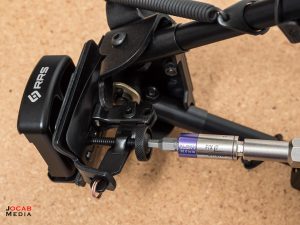 I used a 55 in-lb torque limiter to secure the RRS clamp to the RRS HCA. There is no recommend torque rating, but I figured this would be tight enough to prevent the fastener from loosening up.

Note: I know for a fact that 20 in-lb for the screw to secure an RRS clamp to whatever it is being mounted to is too low and will eventually rattle loose.

The end result is a bipod that will interface directly with an Arca-Swiss mount point. 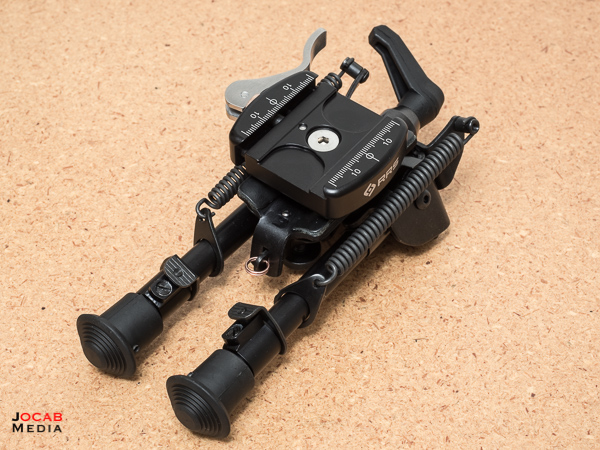 The lever release clamp works great with the Masterpiece Arms BA Competition chassis, and I had no issues with the RRS clamp staying in place on the rifle during live fire. 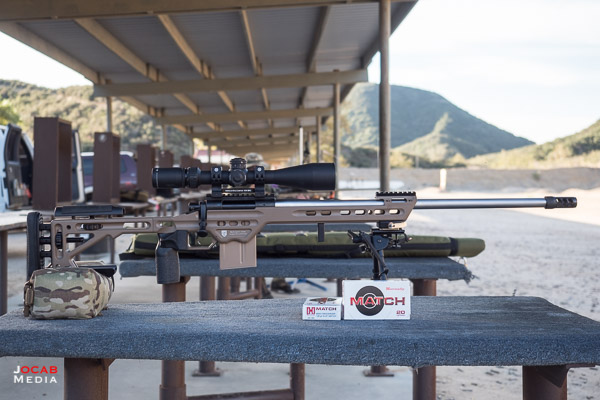 As luck would have it, one week after ordered and received the RRS HCA, Really Right Stuff released the HC-Pro, so I just had to order that one as well. 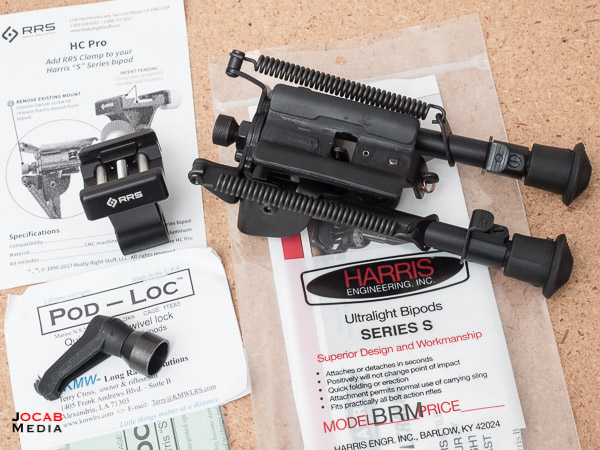 The HC-Pro Clamp Adapter will only work with swivel base Harris Bipods (you will see why in a moment). Again, i paired this RRS adapter to a Harris Bipod S-BRM (with Pod-Loc, of course). 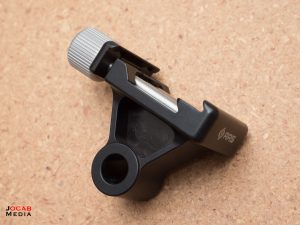 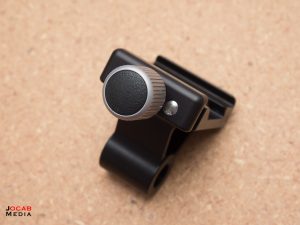 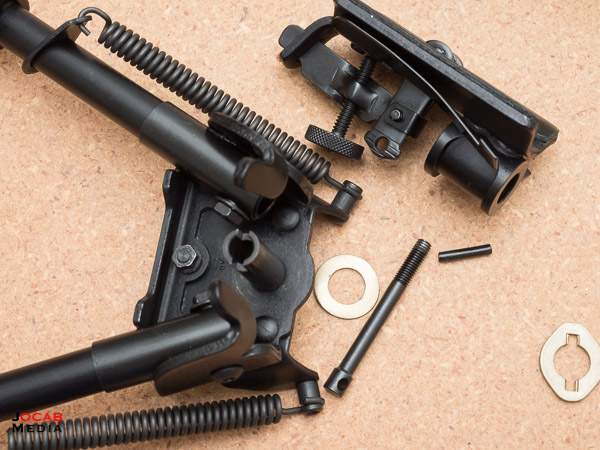 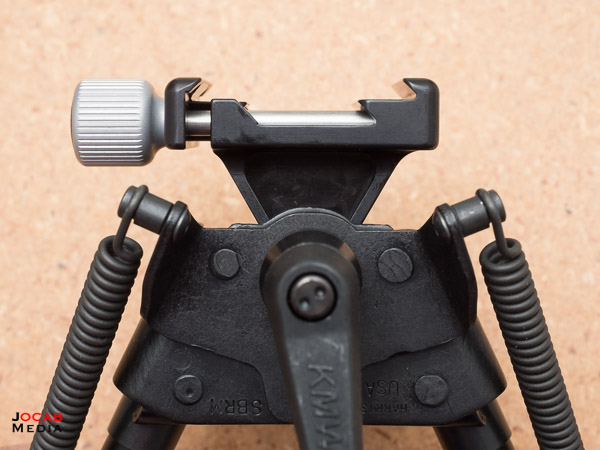 This is a fairly slick setup and in my opinion is much cleaner than adapters that utilize the existing swivel stud clamp base. 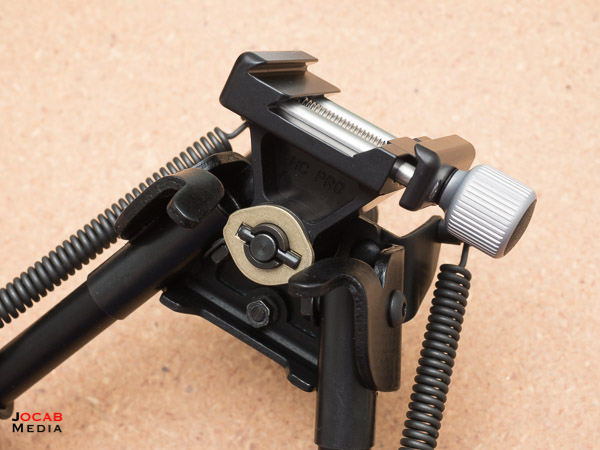 One negative aspect of the HC-Pro is that they did not incorporate any sort of gasket or buffer for the outside portion of the HC-Pro. The OEM swivel base has some leafe springs to cushion either side of the base when it hits the extreme end of cant/swivel range. So the HC-Pro will make contact with the Harris Bipod when it cants / swivels to the extreme left or right. Expect the HC-Pro to get beat up / marred up after you run this in the field for some amount of time. No big deal, though. These are bipods so we expect them to get hard use. 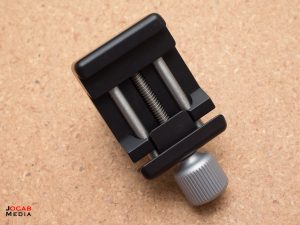 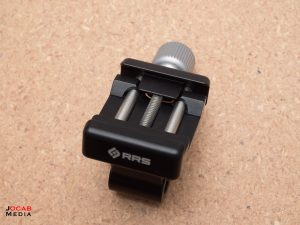 One of the really cool features of the HC-Pro is the fact that it can be used with both Arca-Swiss dovetails AND Picatinny rails. If you notice in the above photos, there are actually two clamp points. The lower shelf is the Picatinny interface, and the alignment shafts and the screw knob shaft are gapped accordingly for the MIL-STD-1913 specification. 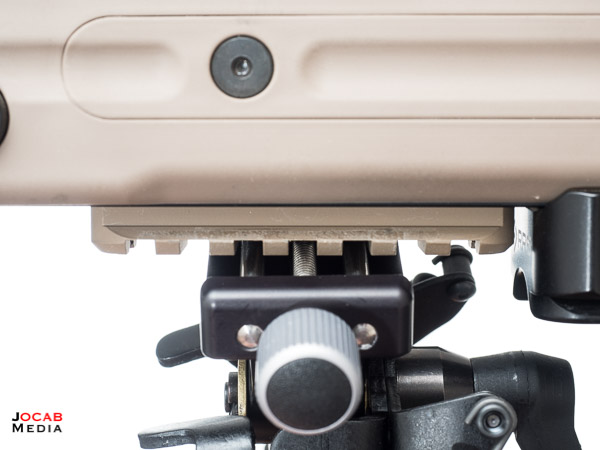 Then of course, the top shelf of the HC-Pro is what interfaces with the Arca-Swiss dovetail. 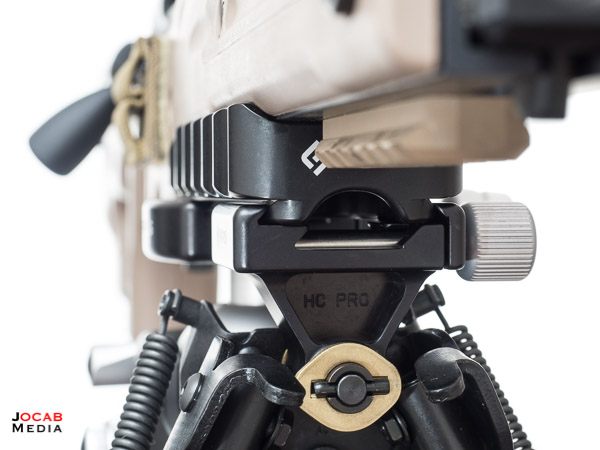 This is a great feature for a couple reasons. One is the fact that this allows you to share the bipod between rifles that have either a Picatinny mount or a Arca-Swiss mount point. Then another use case is where you have a rifle that actually has both a Picatinny rail and Arca-Swiss dovetail. 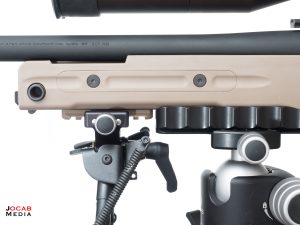 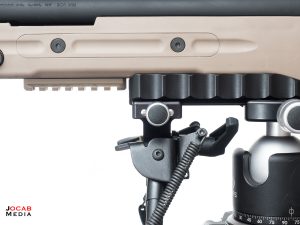 My ATAICS uses a Picatinny rail for bipod attachment, but I have the Really Right Stuff BAI-AT Accuracy International Chassis plate installed on it for tripod mounting. So if I were in a situation where I needed to shoot off a surface that was very small, I could move the HC-Pro equipped Harris Bipod from the Picatinny rail and move it aft to the BAI-AT mount point and still use the bipod from a shorter footprint.

Now some of you may be wondering why the HC-Pro utilizes a screw-knob clamp instead of a lever / quick-release clamp like with the HCA I have configured. The reason is because Picatinny rails have quite a bit of variances from manufacturer to manufacturer. The lever clamps made by RRS are designed for their Arca-Swiss dovetail specification and have no adjustments. They are set at the factory to close on a specific width. So if RRS machined a Picatinny dovetail clamp surface onto a lever clamp, odds are an owner will eventually try to put it on a Picatinny mount where it is not secure, and will have no ability to adjust it. Since a screw-knob will simply clamp down on any width mount (within the range of the clamp’s jaws), this solves the issue of loose specification tolerances or out of specification Picatinny rails.

So which one should you buy? It all depends on your rig.

If you might share the Harris Bipod between rifles that have Arca-Swiss dovetails and sling studs, then the obvious choice is the HCA-Pro. 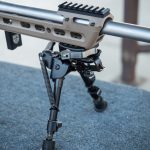 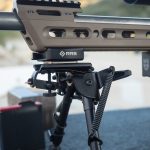 But if you have a system with both a Picatinny rail and an Arca-Swiss mount point on the forend, you pretty much should (need) to get the HC-Pro. 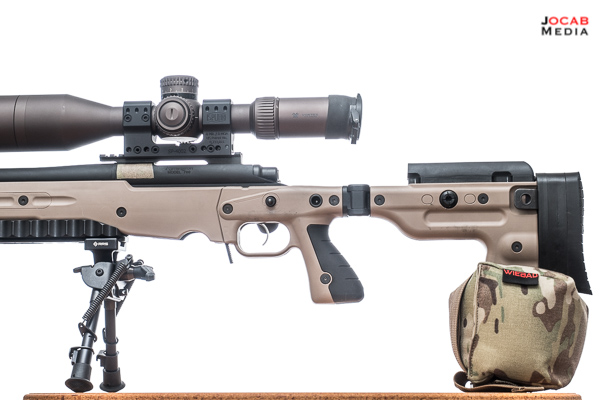 The Harris Clamp Adapter currently starts at $45 for piece that interfaces between the Harris Bipod and the actual RRS clamp. But then you still need to add a clamp, which can result in a final price of around $150 to $165 depending on the clamp size (compact vs long).

The HC-Pro is currently $85 and that is basically all you need. The HC-Pro is less expensive compared to the HCA.

I cannot really say one is going to be better than the other. But in a world were most rifle platforms are coming equipped with Picatinny rails, the HC-Pro wins out since it gives a lot of flexibility in terms of applications (e.g. AR-15 and chassis systems). 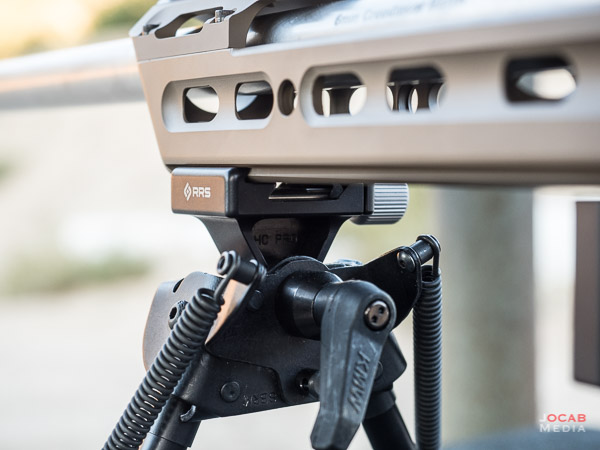 But for the traditional stock die-hards who still have stocks with swivel studs, and want to swap between those and a Picatinny rail equipped stock/chassis, then the HCA is the best option.

I will say that for the Masterpiece Arms BA Competition Chassis, I am going to keep using the HCA equipped Harris Bipod on this setup. I removed the Picatinny rail and the Trinity Rail from the chassis, so the entire forend is clear (except for the quick-detach barricade stop). So the lever clamp is the best choice on this rifle, since it allows me to quickly detach and securely re-attach the bipod onto the chassis.

Addendum: Earlier in this article, I made reference to Picatinny rail width variances. It is important to understand that are technically variances in Arca-Swiss dovetails as well.

While Arca-Swiss is a ‘standard’ in the photography community as a mount type, there is no true standard specifications by which equipment manufacturers must adhere to to be Arca-Swiss ‘compatible’.

The Really Right Stuff dovetail is actually slightly wider than the earlier Arca-Swiss dovetail, and I have had issues several years back when trying to use an Arca-Swiss style plate in an RRS lever clamp (loose in the clamp), as well as trying to use a RRS plate in a non-RRS, Arca-Swiss style quick-release clamp (wouldn’t close). Really Right Stuff has published their dovetail specification publicly for anyone that wants to machine dovetails that will work with their clamps (especially RRS lever release clamps).

There is a blog post by Jobu Design that describes the Arca-Swiss variances in a little more detail. It appears that North American (photography/videography) manufacturers are going with the wider RRS-style specification. From what I understand, firearms accessory manufacturers are also going with the RRS specification as well, especially since RRS is now well known in the precision rifle market.

According to the Jobu Design blog post, the cheaper Arca-Swiss clamps and plates coming out of Asia will be using a dovetail width that is narrower than the RRS specification, and this would explain why some of the cheaper plates I have for general use do not clamp correctly in my RRS lever clamps.

When in doubt, a screw-knob clamp will (should) work with any Arca-Swiss style dovetail width, as long as the dovetail angle is 45 degrees. But odds are, firearms / accessories manufacturers are going to machine any Arca-Swiss dovetail to comply with the so-called “North American” / RRS Arca-Swiss specification.