Hunters have long used “shooting sticks” or some other extra long bipod support for shooting from the sitting, kneeling / crouched, or even the standing position in order to get the bore line over tall grass and other vegetation.

Military scout snipers adopted those same techniques with extra long bipod legs or shooting sticks in order to get a final firing position in situations where the prone position does not yield line of sight on the target. But they are now also making use of traditional photography tripods, particularly with the HOG Saddle tripod gun rest.

The successful employment of tripods for rifle shooting in the field has resulted in an increased demand by precision rifle shooters for tripod gear and accessories to facilitate rifle shooting.

Really Right Stuff is well known in the photography industry for making top quality camera support gear, and I have been using their Arca-Swiss style mounts for my cameras for several years now. 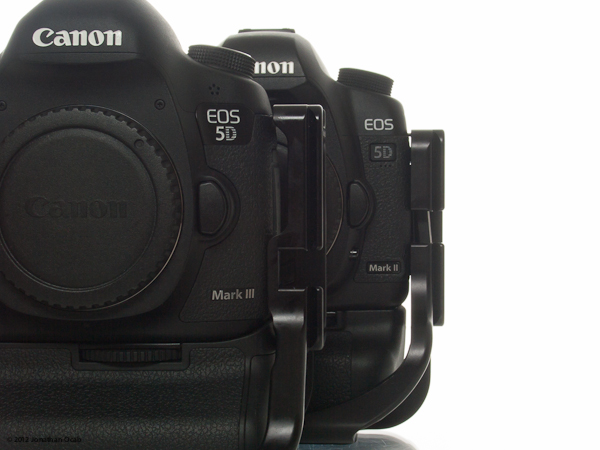 But RRS is now segueing into the shooting industry thanks to the precision rifle tripod trend of recent years by introducing their Sport Optic and Rifle (SOAR) line of products. While making Arca-Swiss compatible plates for spotting scope and laser rangefinders is not a far cry from photography gear, actual plates or mounts for rifles is another endeavor altogether. RRS has already released a few rifle specific adapters, but just recently started shipping what is currently dubbed the BAI – AT, or essentially the Accuracy International AI Chassis Plate. 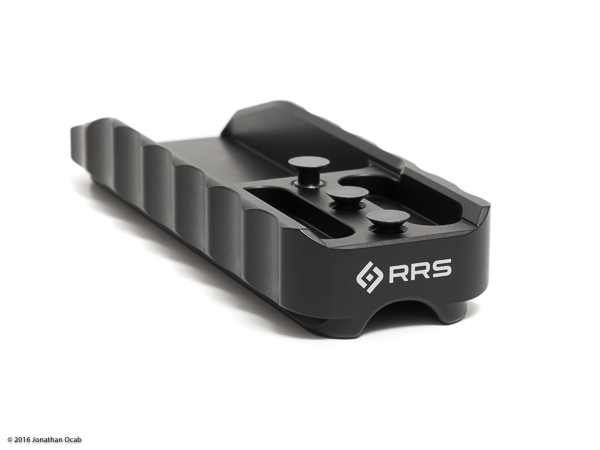 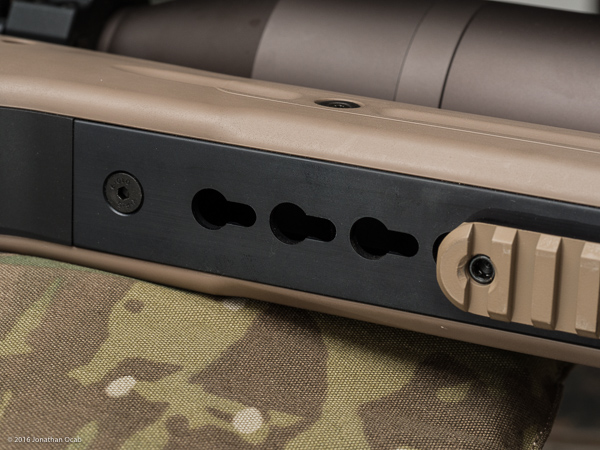 It mounts directly to the Accuracy International key slots (note: not KeyMod) on the bottom of the handguard, right in front of the magazine well. 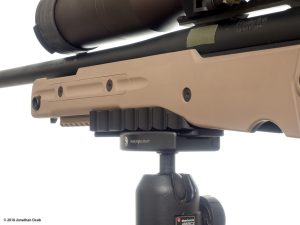 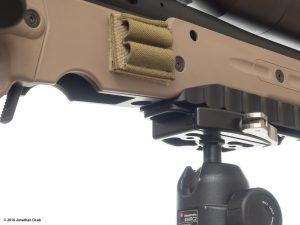 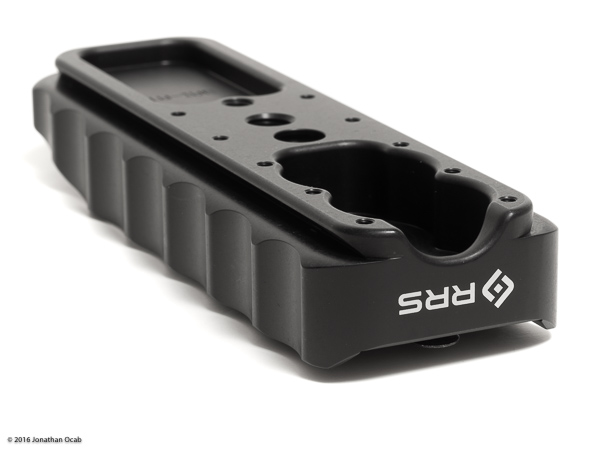 The fit and finish are in line with RRS’s quality and reputation. 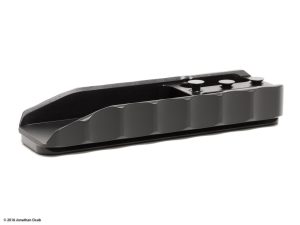 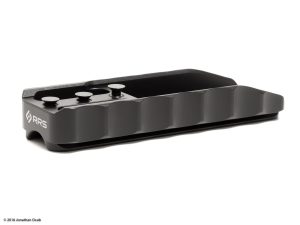 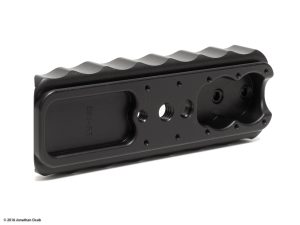 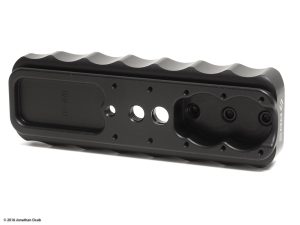 The BAI – AT plate follows the contours of the ATAICS perfectly. 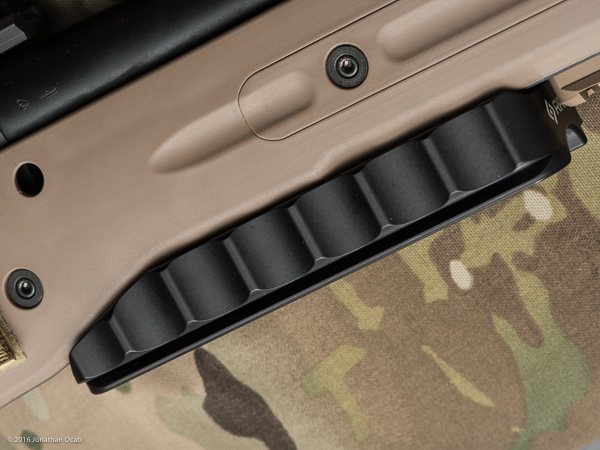 As far as installation, there are no issues, and there is just enough clearance to fit the BAI – AT plate with the 80mm Accuracy International accessory rail installed as far forward as possible. 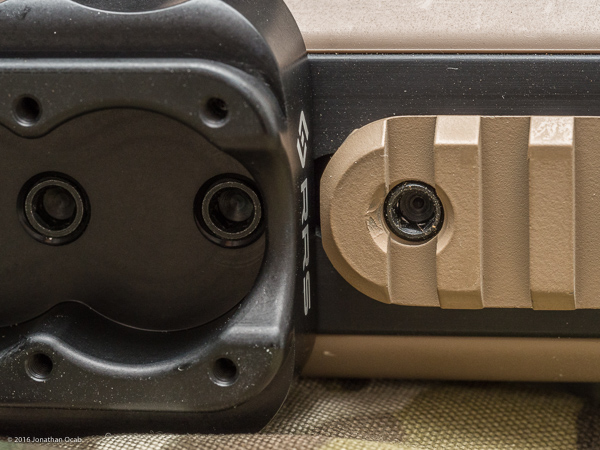 There is also adequate clearance for the BAI – AT with a Harris Bipod (with Pod-Loc) attached on the AI accessory rail. 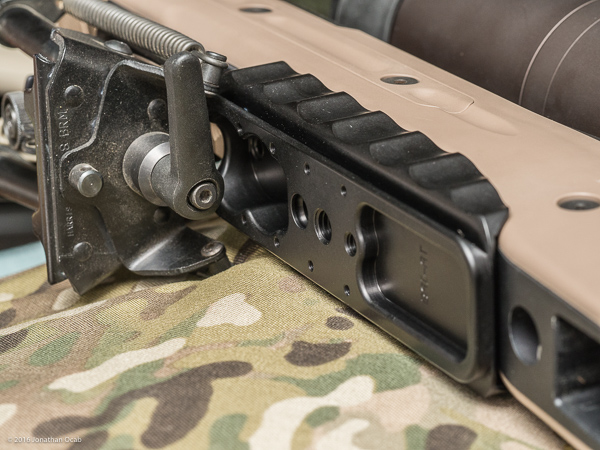 As far as the tripod, I am still using Manfrotto 055XPROB tripod logs and a Manfrotto 488RC2 ball head that I purchased several years ago when I was getting into digital SLR photography (both the legs and ball head have long since been discontinued). 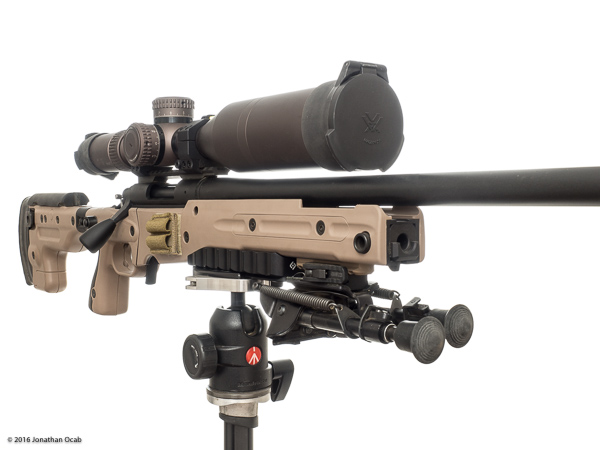 It is important to note that a Manfrotto 488RC2 uses Manfrotto’s proprietary (but well known) RC2 plates to mount a device to the clamp, so it is not Arca-Swiss compatible. When I decided to switch from RC2 to Arca-Swiss style camera plates, I ended up going ‘cheap’ and converted my 488RC2 to Arca-Swiss style by swapping out the Manfrotto head’s clamp with a Really Right Stuff 80mm clamp (B2-LLR, now the B2-LLR-II). A Really Right Stuff BH-55 ball head runs for about $450 whereas the clamp runs for $100, which is why I went that route. 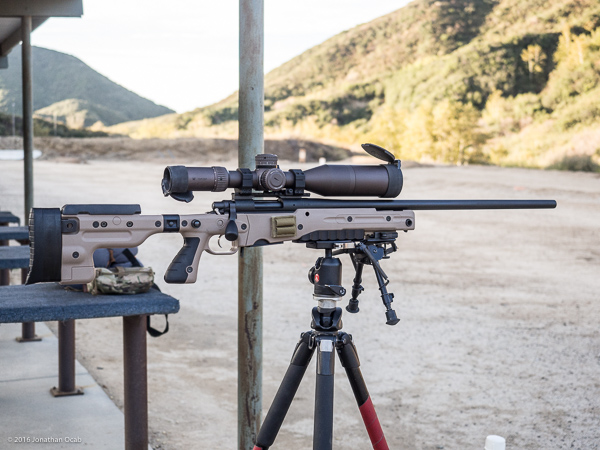 When I originally converted the Manfrotto 488RC2, I was only using this tripod for photography and the heaviest load I was putting on the tripod was a shade over 10 lbs (Canon 5D Mark III with 70-200mm f/2.8L IS II and an Alien Bees ABR800 ring flash). So load capacity wasn’t something I really thought about. But when I was ordering the RRS BAI – AT mount plate, the thought of load capacity did cross my mind. If I remember correctly, my Remington 700 and ATAICS platform weighs around 15 lbs. According to archived product specification pages, the 488RC2 has a 17.6 lb load capacity, and the 055XPROB legs have a 12.4 lb load capacity.

As far as the legs are concerned, I think the 12.4 lb load capacity is a bit conservative, because I never really knew this rating until recently, and I have previously hung weights from the bottom of the tripod center column for stability that resulted in a load greater than 12.4 lbs. But to me, the weak point in the above setup is the ball head. I was concerned it wouldn’t be able to handle the rifle’s weight, particularly if there was any imbalance in forward and aft, given the mount / balance point of the plate on the chassis.

But after I installed the plate and placed the rifle on the tripod, it seems to balance quite well and the ball head is able to keep the rifle in place while at rest, although just barely. 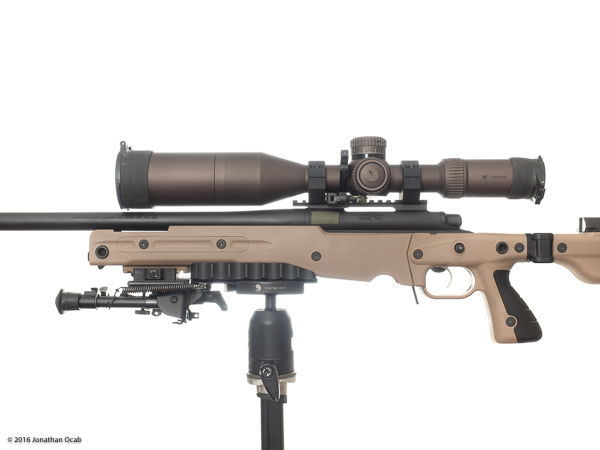 Of course, the true test is actually shooting the platform, so I took it out to the range to try out tripod shooting for the first time. When I got behind the gun and started dry firing on a 100 yard target, I realized tripod shooting is not as stable as I was expecting.

I don’t know if it is my setup specifically, but there is a lot of wobble and shake at the ball head. It is not the ball, but more specifically the stem from the ball to the clamp. So when I placed shoulder pressure against the butt of the stock and acquired cheek weld, the reticle was jumping around quite a bit (especially at 27x magnification). I was aiming at 2″ Shoot-N-C pasters on a cardboard backer and based on the reticle movement, I estimate that my reticle was jumping around about 6 MOA.

I shot several five round groups and it became an exercise in tightening the hold and shooting ahead of the hold, just like I would do in the 200 yard standing stage of High Power Service Rifle competitions. 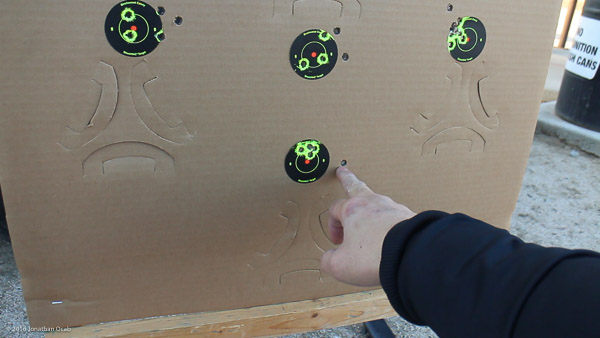 I ended up shooting some decent groups, although with one (or two) errant shot in the group. But all of my shots were called, even the ones outside of the group. So my sight picture was dead on, but it was simply me being off on my trigger control when I needed to break the shot with the looser hold.

I will say that I left the range that morning with some disappointment. I expected tripod shooting to be a bit more stable. But I really didn’t know what to expect from this platform given I have never shot from any sort of tripod setup before. I will say that this reinvigorates my desire for the Really Right Stuff BH-55 ball head that I initially passed over a few years back due to cost.

The BH-55 has a 50 lb load capacity rating, but the stem from the ball to the clamp looks a lot thicker than what is on the Manfrotto. To be honest, I do have some concern that given how the rifle is being clamped into, the shock from recoil may eventually result in the ball head stem snapping, cracking, or otherwise failing on the 488RC2 head.

So given the live fire results from my first outing shooting off of a tripod, it makes me want to get a better ball head to see if it actually becomes more stable.

That being said, the Really Right Stuff Accuracy International AT Chassis plate (BAI – AT) is definitely a quality accessory produced by Really Right Stuff and if you are looking into getting into tripod shooting, it is something you should consider assuming you have an ATAICS. But if you don’t have an ATAICS, RRS does make plates for other rifles / chassis / stocks like the Desert Tech and attachment standards including KeyMod, MLOK, and Picatinny.

The HOG (or PIG) Saddle is probably the most widely used precision rifle oriented tripod device, and it is more universal in that it is just a U-shaped vise that you rest the rifle fore-end in. So if you have a rifle that Really Right Stuff does not make a specific plate for, the HOG or PIG Saddles are probably the better option for you. Naturally, Really Right Stuff also makes their own tripod vise dubbed the VYCE.

But I feel that going with a RRS (or other Arca-Swiss style) clamp and using RRS plates for specific stocks and chassis (assuming RRS makes one for a given system) provides a very robust and versatile tripod shooting platform. Not to mention, it makes more sense for someone like me who already has an Arca-Swiss compatible tripod.

Anyway, I can give a solid recommendation on the Really Right Stuff Accuracy International AT chassis plate (BAI – AT) for any ATAICS owners. The plate is solidly constructed and the fit to the ATAICS is perfect. The BAI – AT currently runs for $75 and can be ordered directly from Really Right Stuff.

But the caveat is using a good ball head and Arca-Swiss compatible clamp system on tripod legs that can adequately support the weight of the rifle platform being deployed on it. 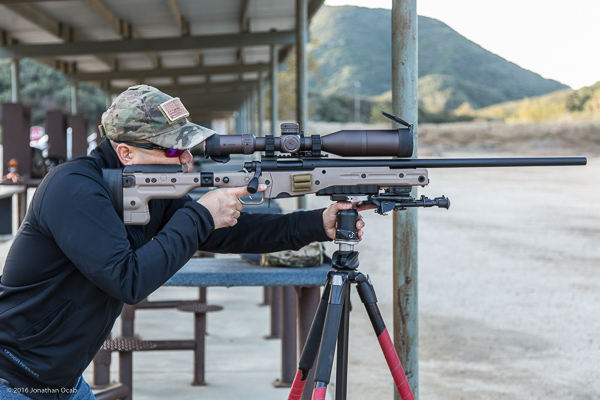