Part 4 of my 2018 SHOT Show After Action Report ended with a mention of the NRA Carry Guard program, which focuses on training and instruction on all aspects of concealed carry, not just how to shoot but also how to conduct one’s self before, during, and after a self-defense scenario.

There was one training product that I took a look at during SHOT Show which is not new and is something I had heard of before, and was actually asked to review several months ago (and never did). 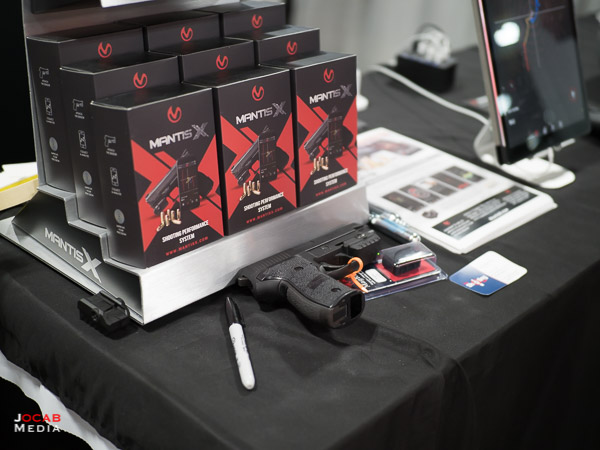 The Mantis X Shooting Performance System is a small unit that is attached to the accessory mount of a pistol, which can measure the movement of the firearm before, during, and after a live fire or dry fire shot. 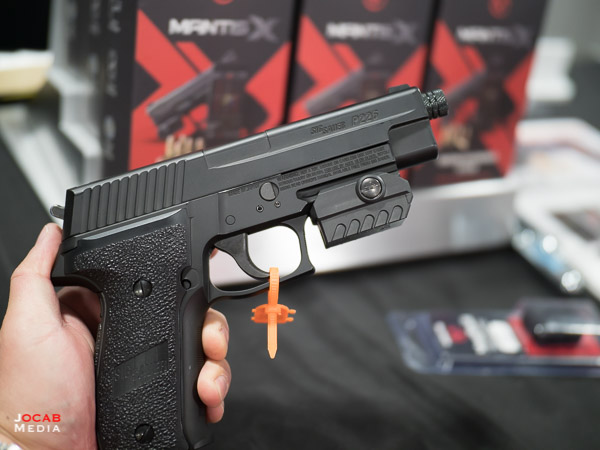 The system connects to a smartphone running iOS or Android OS via Bluetooth and the Mantis X application will display, record, and playback the shot data to help the shooter analyze pre-shot, shot, and post-shot tendencies. 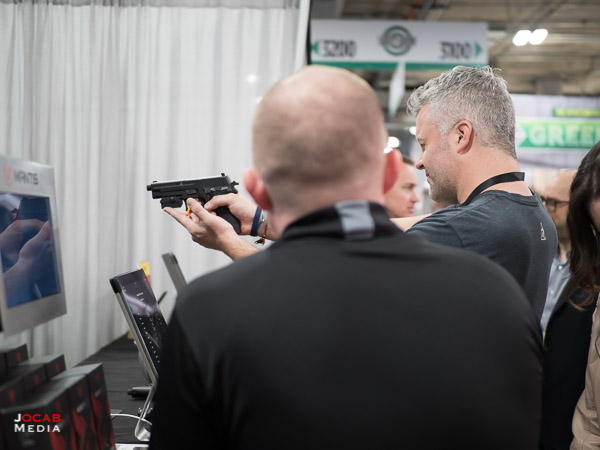 The Mantis X uses a gyroscope / accelerometer much like a smartphone in order to read the movement of the gun. I did ask if they would be able to program the Mantis X to provide valid feedback while drawing from a holster position. Obviously this is more difficult since the sensor is all based on movement, and drawing fast and taking a quick shot will require more logic and perhaps better sensor technology in order to read and translate the holster draw and presentation on target movement, while accurately detecting the trigger pull. But the engineer at the Mantis X booth indicated this is actually one use case they are experimenting with. So it is a possibility in the future.

The Mantis X Shooting Performance System goes for $150 and is readily available from various retailers including Amazon. In all honesty, the price seems a bit high to me. A $100 price point would make this device an easier purchase consideration, but I feel like there is value in this unit. I am considering getting one of these to actually get more valid feedback in my dry firing practice at home, but I want to see how it will function in a live fire range session. We will see if I can divert funds towards a Mantis X.

While on the subject of range sessions, Rite in the Rain introduced some new weatherproof targets. 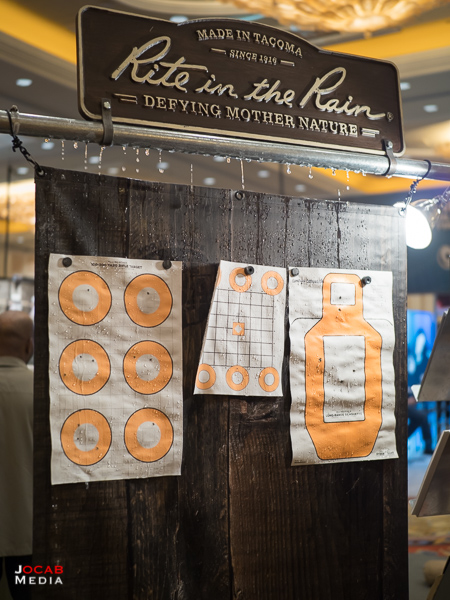 I recall Rite in the Rain coming out with some weatherproof targets last year, but they were very unappealing from a visual standpoint and were actually just prints of US Army zeroing targets.

These new designs on Rite in the Rain weatherproof paper are a bit more appealing for the general shooter and still offers good target patterns for zeroing and target practice in general.

These targets are very nice for those who have to shoot in less than ideal conditions and want to be able to shoot test groups in the rain, as opposed to just shooting on steel targets. 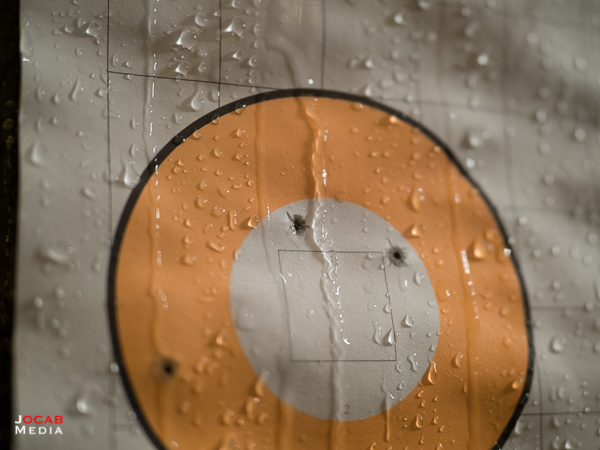 The sample targets show that the paper cuts well for distinct bullet holes. These new Rite in the Rain target designs should be available soon.

During my trek through the 2018 SHOT Show, there was one cartridge that stuck in my mind and that is the recently announced .224 Valkyrie. Savage Arms was bringing this cartridge front and center in some AR platform rifles, which is no coincidence since Savage Arms is owned by the same parent company as Federal Premium (Vista Outdoors), and Federal Premium Ammunition is the creator of .224 Valkyrie. 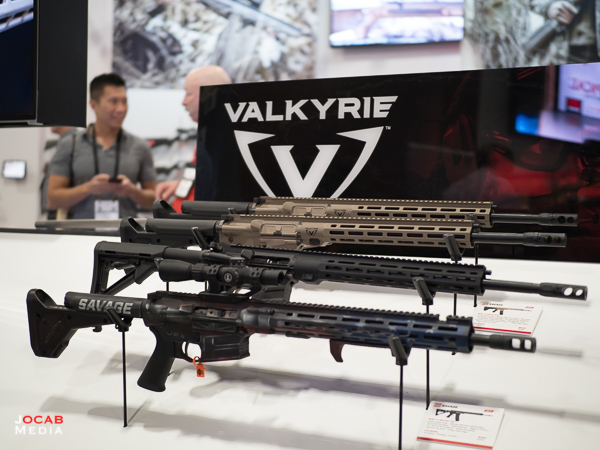 Ever since the huge success of the 6.5mm Creedmoor from Hornady, other manufacturers in the industry have been trying to create the next big cartridge as seen with the creation of .22 Nosler and 6.5 PRC. I have personally been pondering building a .223 Remington bolt rifle to experiment with 90gr bullets, which I never bothered with while shooting High Power Service Rifle, since I could not shoot 90gr fast enough in a 20″ AR-15 Service Rifle barrel to take advantage of the high ballistic coefficient of that bullet.

But with a bolt rifle where I can run a 24″ or perhaps a 26″ barrel, I should be able to shoot a 90gr fast enough to really reap the benefits of the higher BC.

Then the .224 Valkyrie was announced and my interest to experiment with .22cal 90gr bullets was piqued. Based on Federal Premium Gold Medal Match 90gr SMK ammunition, the .224 Valkyrie factory ammo gets 2700fps out of a 24″ test barrel. 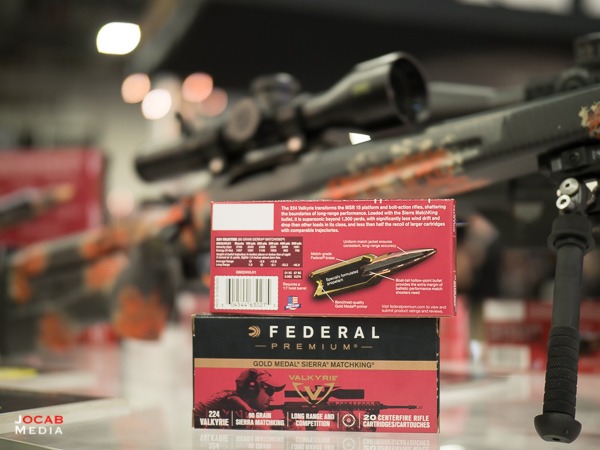 Masterpiece Arms published a video running one of their in-house guns chambered in .224 Valkyrie with a 26″ 1:7″ twist barrel and in video comment/reply claimed that the 26″ barrel pushes the Federal 90gr ammunition at 2780fps.

If you go off the reloading manuals, .223 Remington with a 90gr SMK maxes out at about 2500fps in a 24″ test barrel. Even if you consider reloading manuals are being conservative and you assume you could get as high as 2600fps with 90gr .223 Remington in 24″, then the .224 Valkyrie looks extremely interesting with its 2700fps muzzle velocity out of a 24″ barrel.

I have not been able to find a trustworthy G7 ballistic coefficient for the 90gr Sierra Match King, but the 90gr Berger VLD has a G7 BC of .274 (according to Berger), which is really good considering the 6mm 105gr Berger Hybrid is .275 (although, you can definitely launch a 6mm 105gr faster than the .224 Valkyrie can push the 22cal 90gr).

I am on the fence right now on trying out .224 Valkyrie. I mentioned in Part 2 of my 2018 SHOT Show After Action report that I pre-ordered an American Rifle Company Nucleus action with a standard .308 style bolt face. When the action is ready to ship, I may opt to get an additional bolt face for .224 Valkyrie and get a blank (or pre-threaded, pre-chambered barrel) and try the cartridge. But I have plenty of time before I even need to seriously get a rifle build going.

Speaking of Federal Premium ammunition, I noticed one new factory ammo offering that may interest those who jumped on, or are considering jumping on the 6mm Creedmoor bandwagon. 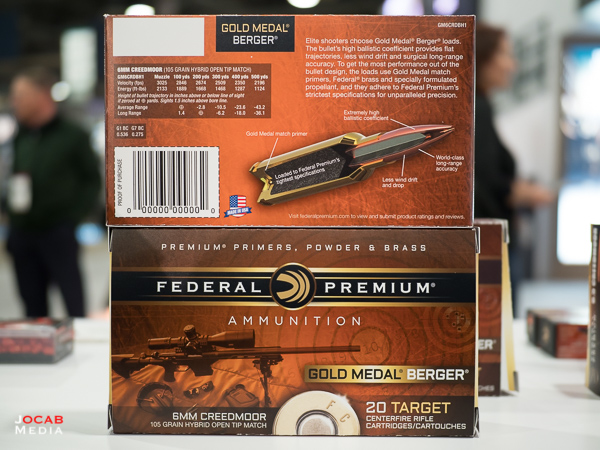 Federal Premium Gold Medal Berger will be available in 6mm Creedmoor using the 105gr Berger Hybrid, which is a very popular choice in the 6mm variants, and is exactly the bullet I had my own custom 6mm Creedmoor rifle specifically chambered for. 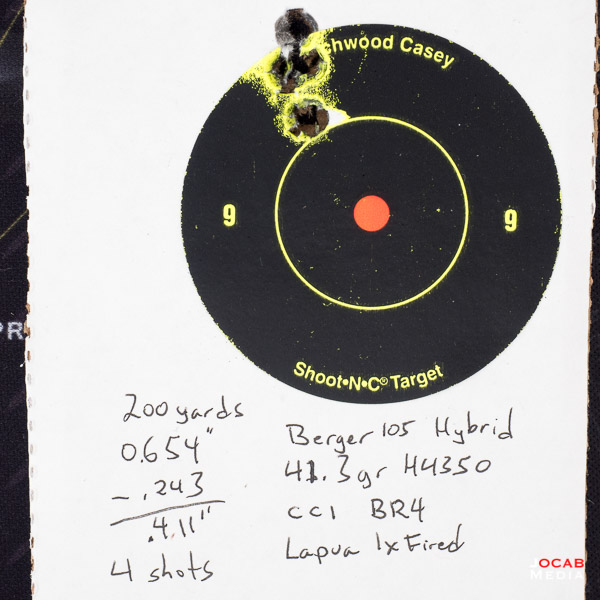 The 6mm Creedmoor 105gr Berger Hybrid Federal Gold Medal Berger ammunition is only rated for 3025fps in what I assume to be a 24″ test barrel.

There still is no SAAMI specification for 6mm Creedmoor as I write this. I talked to a Federal Premium representative about this when inquiring about their decision to make factory match ammunition for this cartridge. He indicated there indeed is a SAAMI specification based on a submission from Hornady, but based on the SAAMI website, this still is not official due to the lack of published documents on 6mm Creedmoor.

I will be making my best effort to get my hands on some of the first production run of the Federal 6mm Creedmoor factory ammunition to measure and document for the rest of the shooting community. I did voice my concern to the Federal representative about how I consider the 6mm Creedmoor to be a wildcat, even though factory guns are being produced with this chamber. As a handloader, I knew what I was getting into with 6mm Creedmoor, but those shooters that do not handload, or are heavily reliant on factory ammunition, can run into problems with 6mm Creedmoor chambered rifles.

While on the subject of the 6mm Creedmoor cartridge, I did visit Peterson Cartridge to talk to them and learn a bit more about their company and was pleasantly surprised to discover they will be producing 6mm Creedmoor brass in both Small and Large Rifle Primers. 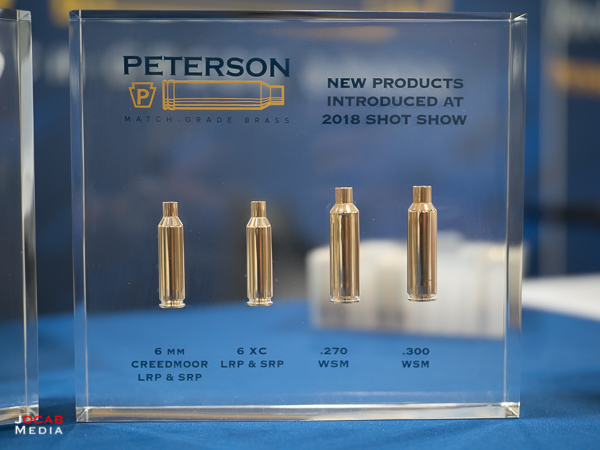 I had heard about Peterson through the gunsmith that built my 6mm Creedmoor in the earlier photo. He had indicated he tried their brass and was highly impressed with it. I had discussed Peterson brass with other long range shooters and they also had high praise for Peterson. 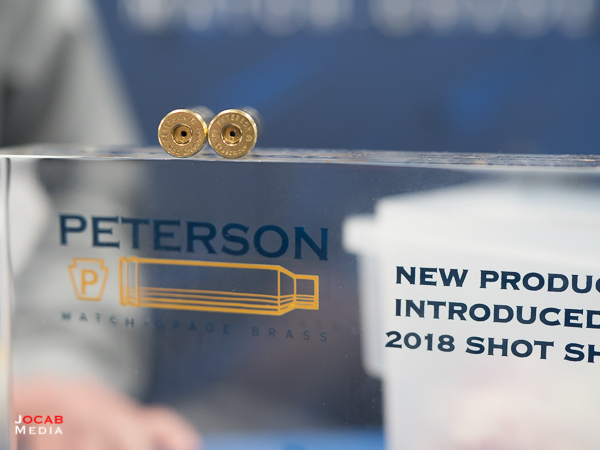 In speaking with Derek Peterson, President of Peterson Cartridge, I felt assured regarding the seriousness and quality of the operation that Peterson Cartridge is conducting. Obviously, without actually loading and shooting the brass, I can’t truly gauge the quality of Peterson Cartridge brass, but from what I can tell, the samples looked excellent. They are punched flash holes, not drilled, but every cartridge goes through a deburring process to clean up flash holes. All brass is annealed. I asked Derek Peterson about where his brass stands as far as load recipe variance to Lapua brass, and he indicated reloaders tend to use less powder charge than in Lapua brass to get the same velocity. So there is going to be thicker brass (in theory) with Peterson Cartridge brass, and less volume capacity.

I am extremely eager to try Peterson Cartridge 6mm Creedmoor brass in a Small Rifle Primer pocket. I was told the brass should be available within a few weeks following the end of SHOT Show, so I am checking their website daily. Expect load data and a review on this brass on my blog.

I want to end Part 5 of my 2018 SHOT Show After Action Report mentioning the various shooting celebrity appearances at SHOT Show. I brought up the Larry Vickers book signing at the Blue Force Gear booth in Part 3 of the AAR, but there were many other appearances and signings throughout the show at various booths.

The Miculek family was present throughout the show and are a popular meet and greet for many attendees at SHOT Show. 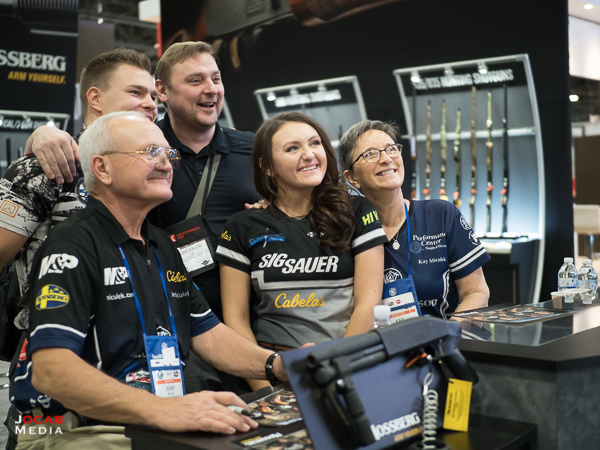 Of course, there is the ever popular, highly renowned, and highly respected Julie Golob promoting for Smith and Wesson and Project Childsafe. 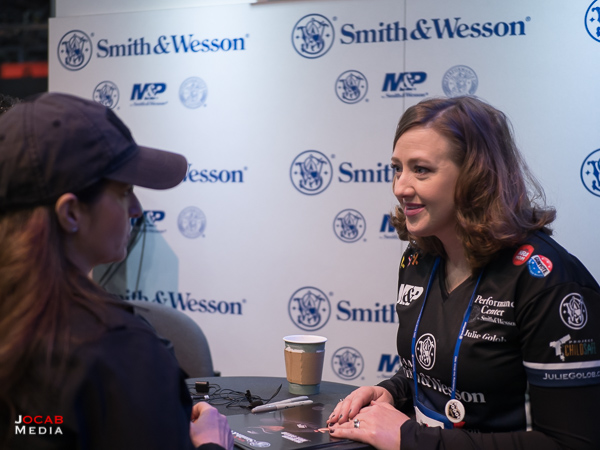 Then there was Eva Shockey who made a few appearances, and who garnered very long lines of fans wanting to meet her and get an autograph. 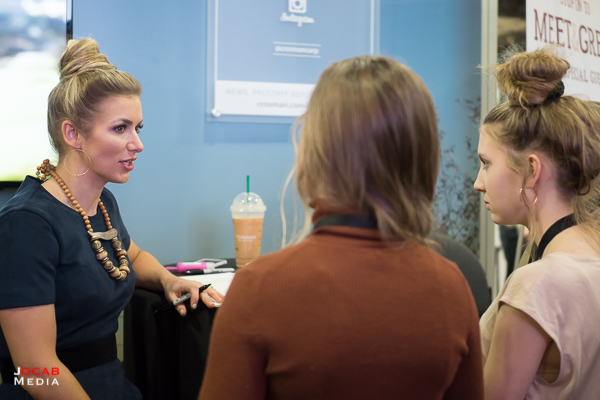