This past Sunday, August 24 (2014), I attended the Carbine Manipulation 1.0 course taught by the Falcon Operations Group (FOG). I have taken two of their pistol courses in 2013 and after I finally built a ‘modern’ AR-15 carbine-style rifle, I wanted to take one of their rifle courses.

The morning started off with the typical safety brief (four rules of firearms safety, range specific rules, medical procedures) and then a battle zero session based on a 50 yard BZO.

From there the course went over the basic fundamentals of marksmanship (e.g. sight alignment, sight picture, trigger control, reset). 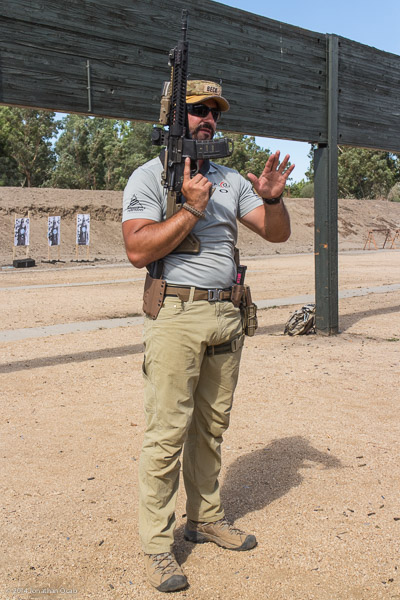 After that, the course covered some basic (unsupported) positions meant to demonstrate some alternative stable positions to shoot from other than standing. FOG instructors covered basic prone, sitting, and kneeling, all unsupported (no traditional sling usage like in High Power Rifle competition or in military rifle qualification).

Then the course transitioned into immediate short range DEA dot drills where administrative reloads, initial stance, and sight/optic height over bore was covered, which was then followed up with several iterations of DEA dot and zone engagement drills from short range progressing to further distances. 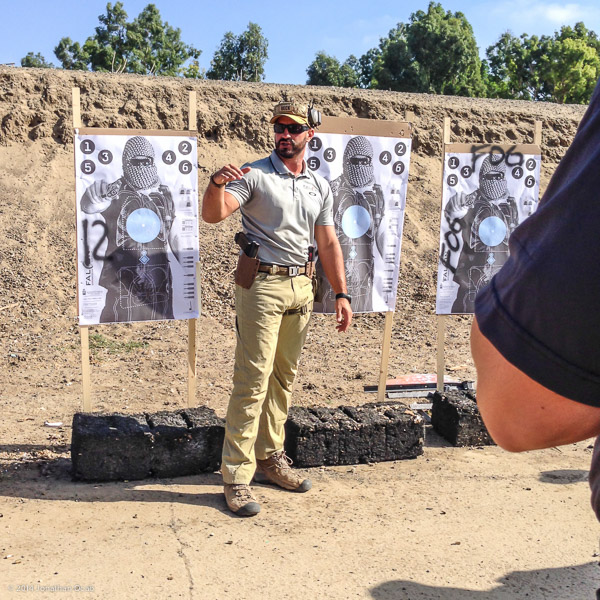 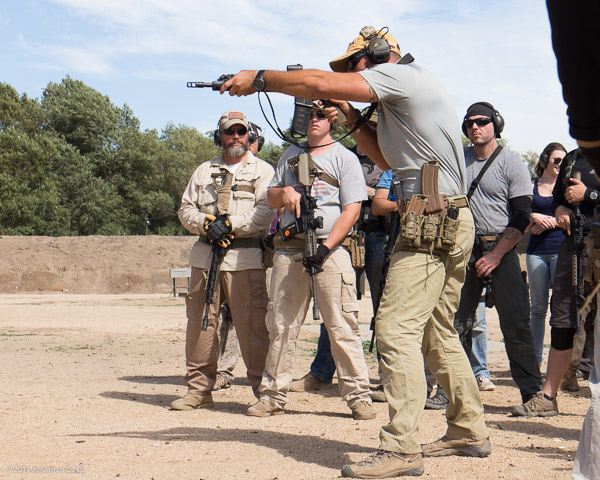 The day ended with a student versus student single elimination shoot off at 50 yards on steel targets and a short feedback session between the students and instructors.

During the lunch break, there was a short demonstration of firearms maintenance / cleaning, as well.

Having taken courses taught by FOG, I can still reassert that the instructors kept the course safe and sane. I personally didn’t experience any safety issues from any of the other students around me, but that could have been because the guys on the adjacent targets from me have handled firearms before (avid recreational shooters).

For the most part, students were all using an AR style rifle. There were a couple SCAR variants from what I recall. 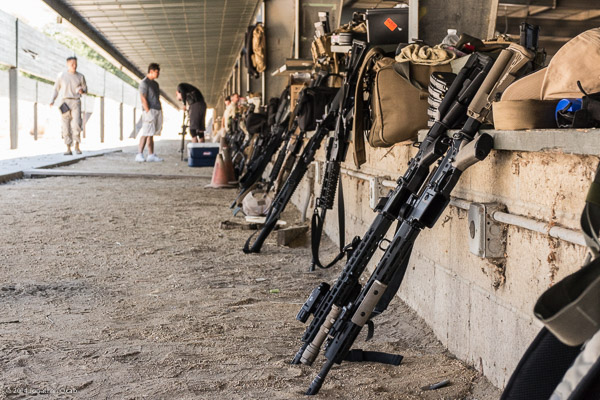 The optics used ran the gamut. I saw a mix of Aimpoints (Comp to Micro series), EOTech, Trijicon, and some one-off Bushnell, Burris, and (if I recall correctly) a Primary Arms of some sort. In regard to magazine carry, people ran either belt magazine holsters / pouches or chest rigs. Slings seemed to vary between Magpul single point slings or a two-point sling variant (VCAS or VTAC).

As far as an introductory course is concerned, this is very much beneficial for the beginning shooter. If you’re that person that just bought his/her first defensive AR-15 and wants to learn how to use it, the FOG Carbine Manipulation 1.0 course is for you. They’ll get you going from no zero to a decent amount proficiency with a rifle in a day’s worth of instruction.

I feel that the Carbine 1.0 course does provides a good introductory to basic rifle manipulation by covering the various positions for defensive rifle shooting, as well as all of the types of reloads, and basic shooting principles.

That being said, if you have any amount of time behind a rifle like I do, you will find this course to be *very* slow speed.

I feel that even coming in with a decent shooting background, Pistol 1.0 was still well paced and well oriented for all types of shooters, beginner to novice to moderately experienced to ‘expert’. Whereas the pace and presentation of the Carbine 1.0 simply didn’t have the same tone for an experienced shooter as Pistol 1.0 did.

This is no real fault on the instructors of FOG. The course is what it is. 1.0 pretty much means basic, so you have to expect this type of rudimentary instruction. 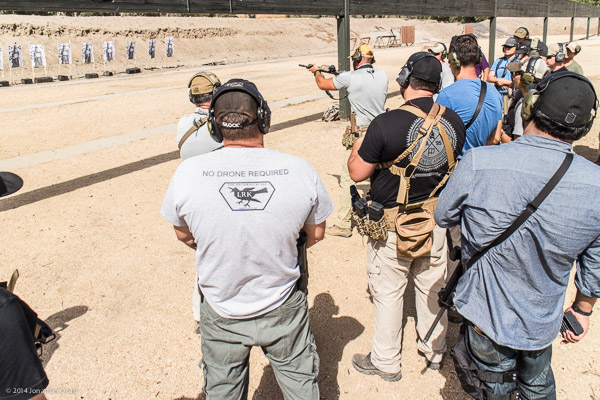 If anything, the one aspect of the course that could have been optimized was the BZO portion. I came in with my optic zeroed for 50 yards / ~200, which is what zeroed my optic for ever since I built it earlier this year.

When the instructors had all of the students shoot at 25 and 50 to confirm, both of my 5-shot confirmation groups were on and I didn’t even touch my adjustment knobs. Several other students around me were pretty much dead set on their optics or sighting systems already as well. The other half of the class took several strings to get their sighting systems zeroed that morning.

The main contributing factor to the long BZO period was the fact that people walked in with absolutely no zero for their sighting system. From what I understand, a few students walked in with freshly installed optics without bore sighting, much less live fire testing.

Anyway, had I known the BZO portion of the course was actually on the course agenda / syllabus, the other experienced shooters in the course could have assisted the newer shooters with their newly installed optics before the course started. The instructors didn’t want any firearms uncased before the safety brief, but I think it would have been appropriate to allow students to break out the upper receivers (for those who have AR-15 style rifles) and bore sight before the class began.

Again, I totally understand that a 1.0 course is oriented towards the most novice shooter, but I felt that the BZO / zeroing portion of the course was detrimental to the pace of the course. It’s obviously necessary for a beginner course, but it could be optimized in some fashion.

While not a real complaint or gripe, but I personally didn’t take much stock in the firearms maintenance / cleaning presentation during lunch. Firearms cleaning is a religion in the firearms community and everyone is split off in different ideologies and beliefs when it comes to cleaning firearms.

I have my own set way of cleaning my firearms, particularly my long guns. My cleaning equipment for the AR-15 platform is very much tuned, too, considering I use specific rod, jag, and patch combos that I have found to be optimal for the AR barrel, along with various scrapers and brushes to clean the bolt and action.

But for the ‘newbie’ AR owner, the cleaning presentation definitely covered what needs to be cleaned and inspected during regular rifle maintenance.

At the end of the day, the FOG Carbine Manipulation 1.0 course wasn’t as fulfilling for me as I hoped.

I didn’t do an exact round count, but I walked into the class with seven (7) 90-round boxes of XM193 (on 10 round stripper clips) and a few extra strippers from a partially used box. I walked out of the class with four (4) full 90-round boxes and a extra rounds in my magazines. So I think I expended roughly 270 rounds. Other shooters probably expended more, especially the newer shooters who took a few more iterations in specific drills if they were called out by an instructor to make corrections and retry, and those who spent more time zeroing their firearms that morning.

That is not to say that I didn’t pick up a few things from the FOG Carbine Manipulation 1.0 course. I did learn that I was gripping my fresh magazines in a less than ideal manner during reloads (speed, tactical, or administrative), so I’m not getting better magazine lockup into the gun during seating. I also learned out that I (personally) can shoot prone well enough ‘monopoding’ off the 30 round magazine.

Since I didn’t find 1.0 fulfilling for me, that means I *will* be enrolling in the FOG Carbine Manipulation 1.5 course in the very near future. It is a more advanced course and the reason why I didn’t enroll in 1.5 is because FOG has always had a standing requirement that students start off in 1.0 courses before enrolling into the higher numbered training evolutions.

For anyone else that is a novice shooter or a new rifle owner, those people should not skip 1.0. Carbine Manipulation 1.0 will get the new / beginner and novice rifle shooters up and going from the ground up with a good amount of knowledge at the end of the day.