Many of my friends and acquaintances know that I am a fairly accomplished rifle shooter who is self-trained. I never had any formal training or coaching. So all of the techniques and habits (whether good or bad) have all been as a result of reading (print and Internet), observation of other shooters, and verbal discussions with fellow shooters. These were then shaped through years of practice, dry and live fire.

While I was able to obtain an NRA High Power Rifle classification of Master immediately when I began competing, and was able to attain Distinguished Rifleman status within a few years of starting competitive High Power shooting, I have always felt that I could have accelerated my skill growth had I started off with a good coach. It is evident having observed California Grizzlies, the California State Junior High Power Rifle team. The team has an excellent track record and the kids on the team reach Master and High Master level very quickly due in part to the foundation of coaching and instruction.

That being said, as I have been shooting in a non-competitive format, specifically tactical or dynamic-style pistol, I have again built a lot of my skills and techniques through self-teaching. I watched the Magpul Dynamics: Art of the Dynamic Handgun video, and have read/viewed a ton of content on the Internet. But since I had no real way of gauging how well my self-taught skills and techniques are developing (since I don’t shoot competitions such as IDPA or IPSC to see how I score against other shooters), I decided that I should at least take one formal class to:

I did some browsing online to find a course to take and decided to try out Falcon Operations Group (FOG). The first benefit of FOG for me is that it is a locally based training group, operating out of the Prado Olympic Shooting Park in Chino. The other benefit is that FOG has a solid reputation and good word of mouth. 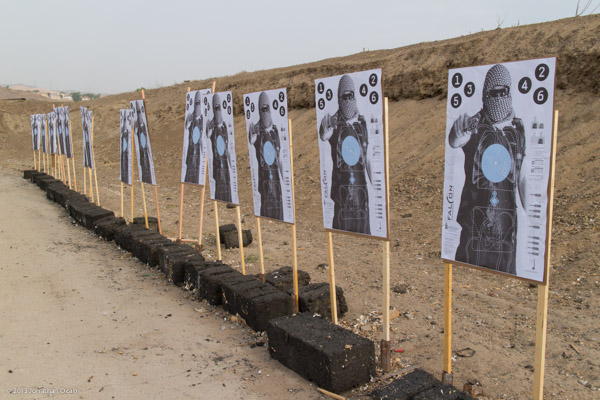 The way that FOG structures their training courses is through levels. They have initial courses dubbed “1.0” followed by 1.5, 2.0, etc, and require students to start at 1.0 before taking a higher tiered course in order to ensure the student has the core fundamentals (both safety and techniques) before taking a more advanced training evolution.

First off, FOG does a solid job maintaining safety on the range. During both courses, the instructors start off the morning and afternoon (post-lunch break) with a safety briefing, and emphasize safety at all times during the training.

Secondly, the FOG courses are well run and the 1.0 and 1.5 courses I attended were paced accordingly. The 1.0 course is a bit slower than 1.5 since there’s a lot of remedial lessons taking place such as grip and stance, not to mention there is a wide range of skill levels in the 1.0 course (from novice gun owners to law enforcement and military). While the 1.0 course has a slower pace, the instructors keep it moving along by doing a good job coaching those who might be struggling with a specific lesson/concept during the day’s course.

For the Pistol 1.0 and 1.5 courses I attended, the FOG syllabus indicated a 500 round count for each course and they were pretty much on par with that number. Considering ammunition is a moderately scarce commodity as of late, many people are shooting less and attending formal training courses even lesser. That being said, FOG actually offers 9mm, .40S&W, and .45ACP ammunition to attendees at cost. This is a great service for anyone that wants to take a shooting course, but is being restricted by ammo availability.

Another nice touch to the FOG courses is that each day was wrapped up with a “shoot-off” evolution with the winner(s) getting a free FOG swag (shirt, hat, or patch). It’s some nice friendly competition amongst the students, while implementing the skills and techniques instilled during the day’s course.

Note: Yours truly won a shoot-off (single elimination, head-to-head mini-steel match: three shots on steel at 25 yards with dueling tree at 15 yards) at the end of the Pistol 1.5 course and walked away with a FOG t-shirt.

In order to rate the FOG Pistol Manipulation courses with respect to how they helped me personally, it would make sense to address the three (3) reasons I mentioned earlier for wanting to take a formal class.

Did the FOG courses give me an opportunity to see how my techniques differed from what is being taught by professionals? Yes, the courses most certainly did.

The initial 1.0 course showed me that my stance is a bit more conservative and is along the lines of what is preached by competition action-pistol shooters: shoulder width and the support side foot a little bit more forward than the gun side. FOG preaches a more aggressive stance: feet shoulder width apart, but the support side foot farther forward similar to a hand-to-hand fighting stance. This is to encourage a stance that can mitigate recoil far better, but also gives the operator a better stance to change positions (explode in another direction if required).

Also, FOG taught a grip that emphasizes the use of muscle instead of bone structure: Elbows more outward and parallel to the ground, instead of the elbows toward the ground. This is a huge departure from my competitive High Power Rifle shooting background where bone support is key to a good shooting position. But the technique is sound because it eliminates the recoil pivot (pistol recoils up if elbows down, while pistol recoils more inward and towards the shooter if elbows turned out, like a buffered piston).

The FOG instructors definitely provided constructive criticism where I needed it. Instructors obviously pointed out my flawed elbow placement in my grip, as well as the poor technique when shooting from cover (too much exposure of my head and upper body in standing, as well as when I presented my gun before exposing), but also helped point out what I was doing right (trigger control, double-tap accuracy, etc).

With all this said, would I recommend the FOG Pistol Manipulation courses? Most definitely.

I think most shooters out there even considering taking a dynamic pistol course will benefit in some regard by taking a course with the Falcon Operations Group.

It’s important to understand that Falcon Operations Group teaches *A* way, not *THE* way. I don’t think every school out there teaches the same exact techniques, but they all have solid foundations and each reputable school teaches a solution to a problem, per se. Whether or not you want to utilize the methods taught and incorporate those techniques into your skill set is up to you.

But I find that FOG does instill mentalities and ideologies that will benefit pretty much all shooters.

For instance, during the Pistol 1.5 course, the instructors had us all tape up our sights with masking tape and shoot from 3 to 25 yards on to a steel plate without our sight picture. 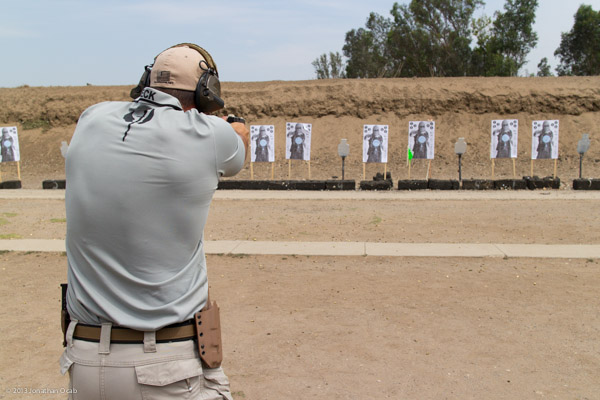 Even though the sights were taped up, everyone in the class was able to make hits at 25 yards without sight picture. This lesson/drill was meant to convey that sometimes you can concentrate too hard on an aspect like sight picture, and still miss. If you rely on your instincts built upon a good stance, good grip, and proper trigger pull, pointing the gun at the target and making a good shot without perfect sight picture can still lead to a hit on target.

So if anyone is looking to get some formal defensive/dynamic firearms training, definitely check out the Falcon Operations Group. They have courses for pistol, rifle/carbine, shotgun, and medical among others. The FOG website at http://www.falconops.net has a breakdown of each course and the equipment requirements for each. 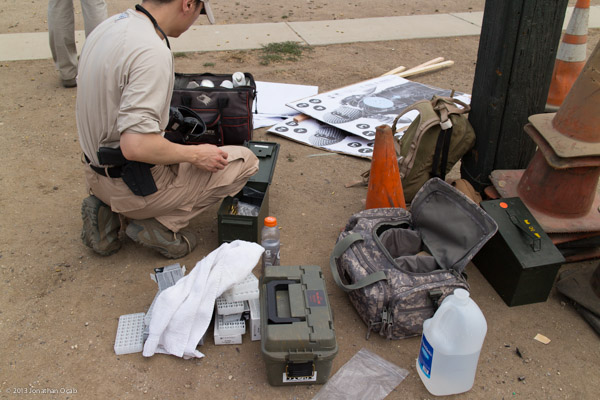