I have been investing more time, effort, and finances to renew my marksmanship and ‘weapons-craft’ endeavors through the discipline of action or dynamic pistol. Most of the time I conduct live fire practice and exercises in outdoor, open air pistol bays (e.g. 25 yards x 25 yards minimum), and thus, a holster is a basic necessity.

My primary full-size, a Glock 17 with Trijicon RMR and Surefire X300 weaponlight, is seeing constant use on the range, but without the X300 light attached since my Blade-Tech is only for the gun without light. 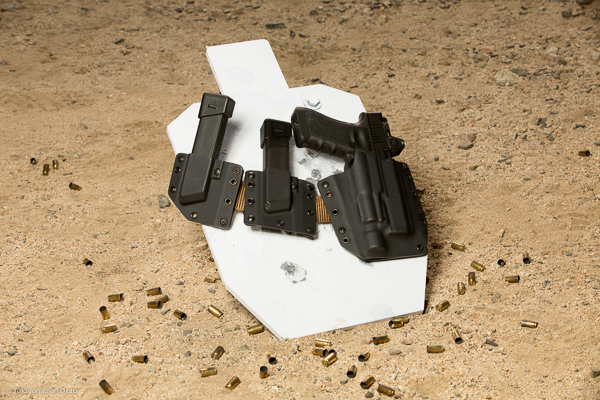 The Phantom LC, or Phantom Light Compatible, is an all-Kydex design, but unlike the all-Kydex Blade-Tech OWB SRB I own, it is a pancake-style holster as opposed to a ‘standard’ outside-the-waistband (OWB) holster. Pancake-style refers to how the design involves two pieces of Kydex molded together to ‘squeeze’ the gun between the two pieces, thus ‘pancaking’ the gun.

What does a pancake design offer over a standard belt holster? The primary benefit is that it keeps the gun very close to the body, much like an inside-the-waistband (IWB) holster, but with the draw convenience of an OWB holster.

There are actually quite a few manufacturers out there making pancake-style holsters, but I chose Raven Concealment Systems because they are one of the most widely known brand names out there with an excellent reputation.

Raven Concealment holsters are custom made and built to order. When you go to their website, you will begin by choosing a holster model, then specifying the gun (and weaponlight if applicable) you want to get the holster for, including several options such as cant (fore or aft angle), body shield cut, belt size, etc.

When I ordered my RCS Phantom LC, I specified:

I also noted these special comments:

The reason why I specified short body shield cut is because it allows for clearance of the thumb which is a personal preference, but also because it ensures better compatibility with my Trijicon RMR configured gun. 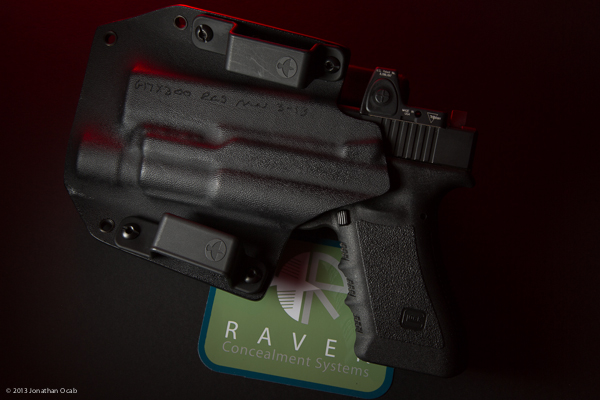 I did contact RCS prior to placing an order inquiring about a gun with an RMR and tall suppressor sights and was told to just make note in my order about the RMR and sights, and provide a photo of my gun for reference.

At the current date this article being written and posted, the ship time for holster orders with Raven Concealment Systems is around 16 to 18 weeks due to the volume of orders. But, specific holster models for certain guns such as Glocks are available under a “quick-ship” option (30 day estimated ship time), since they produce higher volumes of these specific holster configurations and thus, can produce them faster. The configuration I ordered was categorized as a “quick-ship” option holster, which is why I received mine a lot sooner than 16 to 18 weeks.

When the holster arrived, it exhibited good quality, fit and finish. Although, my gun had a very tight retention in the holster, such that it took significant amount of force to unholster the gun from the Phantom LC. Just holding the holster in one hand, I literally had to yank/jerk the holster with deliberate force. There is no adjustment of retention via a retention screw like with my Blade-Tech OWB SRB holster. 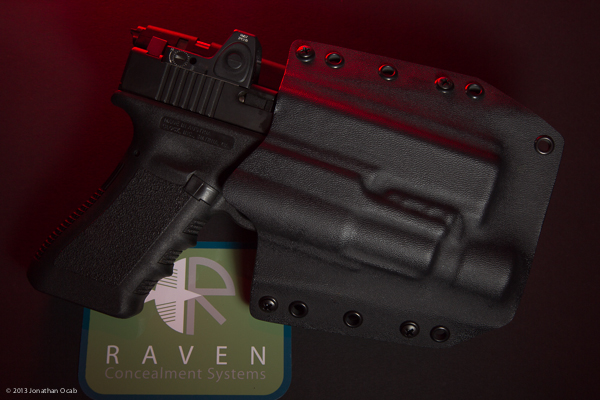 This retention issue was a bit of a concern for me since I’m used to an easier draw from a Kydex holster. So I shot offf an email to Raven Concealment asking if there was any kind of break-in procedure that I’m supposed to follow and was told that the retention issue I was experiencing can happen, and simply doing a few dozen rapid draws of the gun from the holster should wear in the contact/retention points on the holster appropriately. If this did not address my issue, RCS indicated that I could send it back in for an adjustment.

So I went ahead and put the Phantom LC on a belt and did around 50 to 75 rapid draws from the holster. During this time I observed Kydex particles/shavings around the Surefire X300 weaponlight and the frame and slide of the gun signifying the Kydex being worn in. After doing this, I took the holster off the belt and held the Phantom LC in my left hand and was able to draw the Glock out of the holster with a lot less force than before, yet the gun was still retained well (holding holstered gun upside down and shaking forcefully). I sprayed out the holster with air and wiped it inside and outside with Break-Free CLP, and did a few dozen more rapid draws just holding the holster in my reaction hand and yanking the gun out of the holster.

After all that, I started using the Phantom LC holster at the range and am quite impressed with it. I do appreciate what the pancake-style brings as far as hugging the body versus my Blade-Tech OWB SRB holster. After a couple range trips, I decided to get a pair of the Raven Concealment Systems magazine carriers. 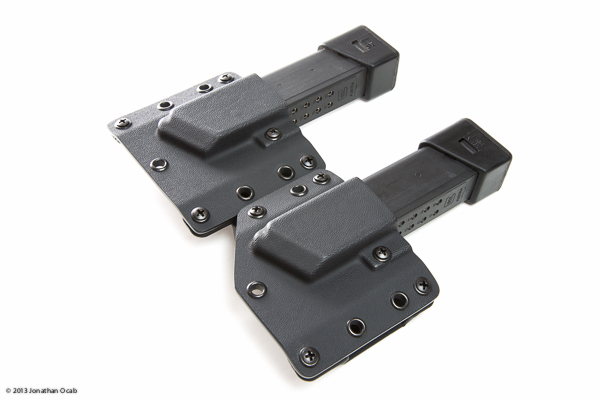 If you notice in the above photo, one of the magazine carriers has a corner cut off. This is dubbed the “MD cut” where MD stands for Magpul Dynamics. The reasoning behind the cut corner is for the a magazine carrier that is placed close to the front of the body. The cut corner allows for more comfort at the forward position (e.g. sitting), better movement, and access to front pockets on pants. The MD cut is typically only needed on the lead carrier (the carrier closest to the belt buckle).

These magazine carriers are also an all-Kydex, pancake-style design, and do a satisfactory job keeping the magazines close to the body, much like with the actual pistol.

After about eight weeks of owning the Raven Concealment Systems Phantom LC and magazine carriers, during which I made several range trips and even participated a day long dynamic pistol course, I have gone through around 3000 rounds of ammo and probably 1000 draw repetitions. The Phantom LC is working like a charm. 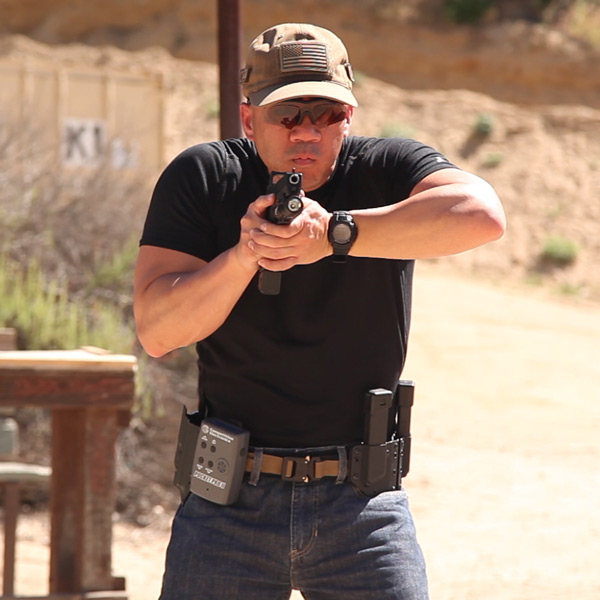 But that’s not to say that I have not found a couple drawbacks with the setup.

One is that the Phantom LC will not retain the gun without the light attached. There are some holsters out there for pistol and light combos that will retain the gun with or without the light attached to the pistol. But those types of holsters are typically Level II (or more) in terms of retention count, and usually have a backstrap style retention mechanism. But the RCS Phantom LC relies on the light as a contact point for retention (see: Raven Concealment Systems FAQ). Thus, if you use the Phantom LC, the light must be attached.

Although, since these holsters are custom molded for the specific light, the one drawback for me is that the Surefire X300 has been discontinued and succeeded by the Surefire X300 Ultra. I already had the X300 for quite some time and I have no incentive to get the Ultra. But if my X300 were to become damaged or otherwise lost, and I had to seek a replacement, I’d end up with the X300 Ultra (since the price of the X300 Ultra is basically the same price as the X300), and would need to get a new Phantom LC holster.

Another drawback is that the pancake-style holsters have virtually no flexibility (Kydex is basically a very hard, impact resistant plastic), and are very difficult to mount on the belt when running a thick belt like an Ares Gear Ranger belt. Instructor/Operator-style belts like the ones made by 5.11 Tactical have enough flex in them where mounting isn’t a big deal. But it does take concerted effort to get the carriers and holster mounted on the body when running a thick duty belt, to the point that once you get it all on, you probably don’t want to take it off until the end of the day, so you don’t have to get it all back on, gain.

The higher difficulty of mounting the gear on to the belt and body is the reason why I opted to get a pair of single magazine carriers for my emergency magazines, and use a Blade-Tech double-magazine carrier with the Tek-Lok clip for administrative and tactical magazines. The Tek-Lok clip allows me to attach the carrier to the belt *after* the belt is buckled on the body. Since I carry my admin/tactical magazines towards the rear of my body (reaction side), attaching the magazine carriers ‘blind’ so-to-speak, is made easier.

That said, these issues are minor and are far overshadowed by the benefits that the pancake-style RCS Phantom LC holster brings to the table as far as a providing a form fitting OWB holster in a solid, sturdy, and durable platform. 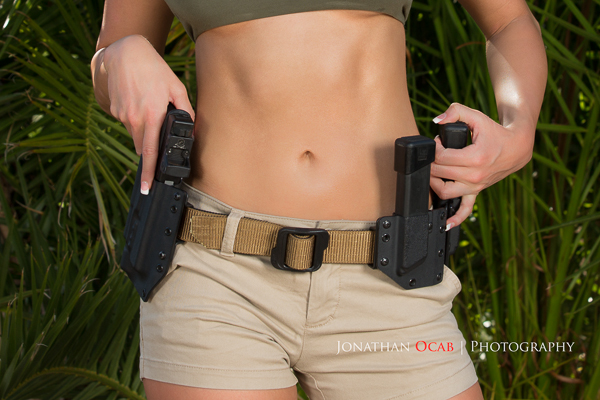 I find the pancake design to be a great balance between OWB and IWB, so much in fact that I am actually considering getting an RCS Phantom for my Glock 27, which I usually carry in a Comp-Tac Minotaur MTAC IWB holster.

For anyone who wants an OWB holster for situations where mechanical / lever (e.g. Level II+) retention is not required and when competition speed holsters aren’t being deployed, I highly recommend checking out the Raven Concealment Systems Phantom or Phantom LC holsters. At the very least, check out a comparable pancake-style holster by another manufacturer. Raven Concealment isn’t the only company making these style of holsters, but just so happens to be one of the bigger names, thanks to word of mouth and adoption by many dynamic firearms training schools (e.g. Magpul Dynamics).

For more information and to purchase, the go to the Raven Concealment Systems website: http://www.ravenconcealment.com 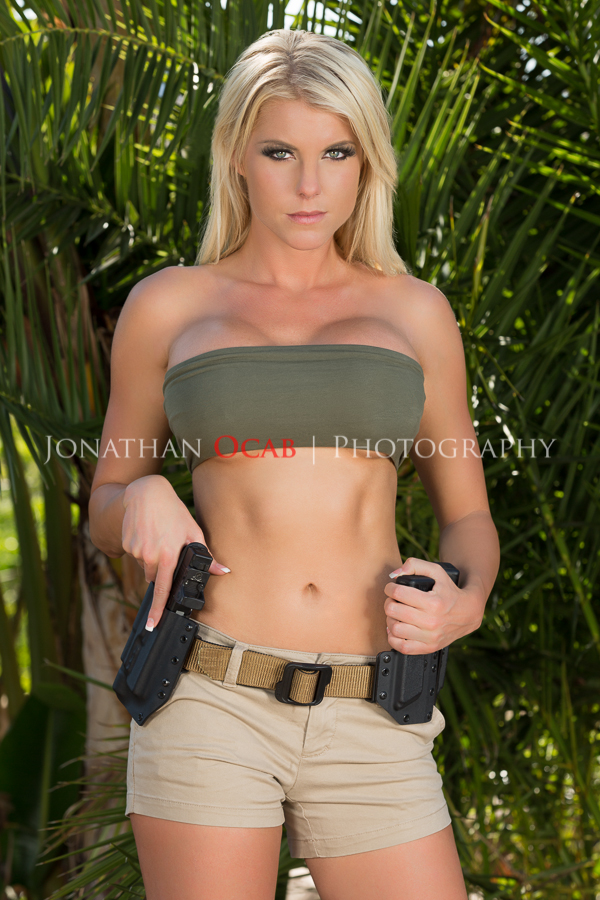