Back in January at SHOT Show 2015, I reported on the newly announced SureFire XC1 handgun / pistol light in my 2015 SHOT Show After Action Report. After 9 or so months, XC1 units are finally trickling out to retailers. Raven Concealment Systems (RCS) is one such manufacturer/retailer that received some of the units from the first run. RCS actually promoted a pre-order deal in August for a SureFire XC1 and a Raven Concealment Systems Phantom LC holster for Glock 19 + XC1.

I took advantage of the offer and put in a pre-order. Shortly thereafter, Haley Strategic Systems published a similar promotion combining the SureFire XC1 with an HSP / G-Code INCOG Shadow holster. I ended up placing an order for an INCOG Shadow, as well (without the light).

After a long wait, RCS shipped out the XC1 + Phantom LC holster and I received it on October 16. 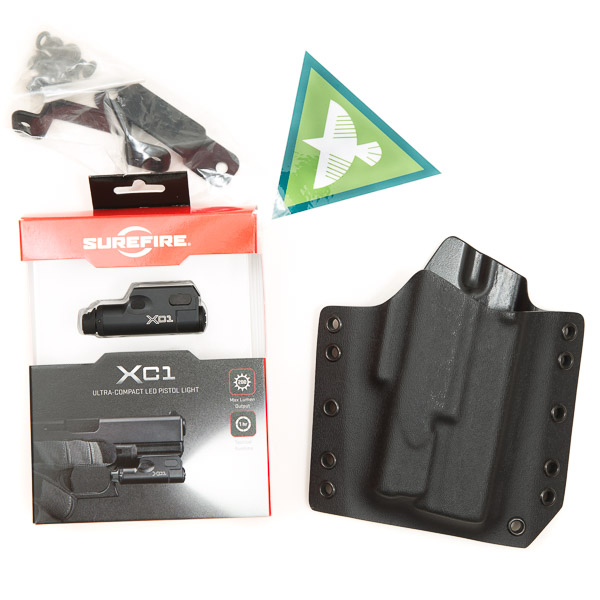 The first thing you’re going to notice is how compact and lightweight the XC1 is, especially if you already own a SureFire X300 or X300 Ultra.

The XC1 is slimmer than the X300 / X300 Ultra because it doesn’t have the same battery compartment requirements and the light bezel is smaller (.375 inches vs 1.125 inches). 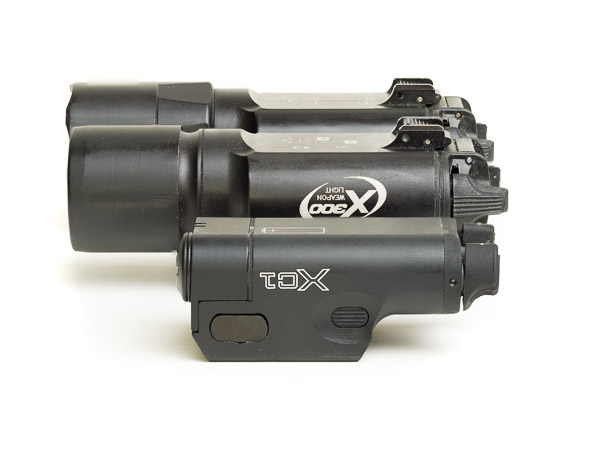 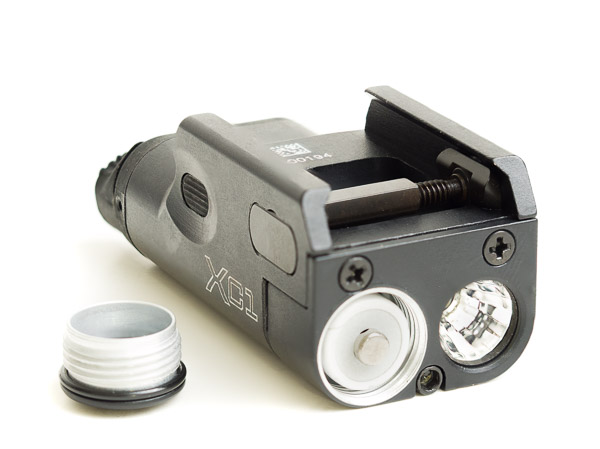 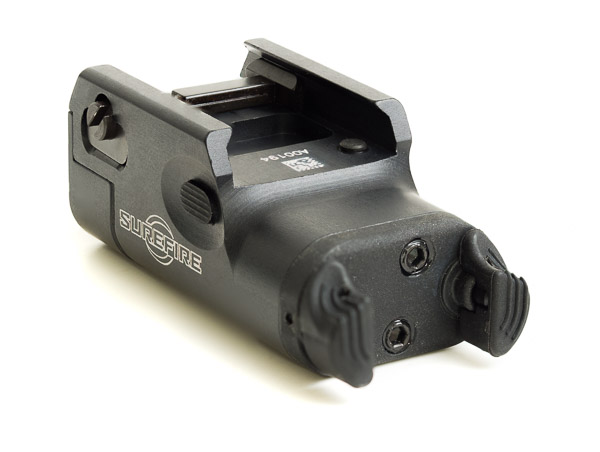 Unlike the X300 units with the U/P latch which allow the light to be attached and detached by hand without tools, the XC1 will require the use of a flat blade screwdriver to attach/detach the XC1 from the pistol. Since I’m primarily a Glock pistol shooter, I am used to being able to quickly attach and detach the X300 / X300 Ultra lights from the pistol. You may find yourself in a situation where you need to use a flashlight only, and being able to remove the weapon light from the gun quickly to use as a handheld light is quite handy. 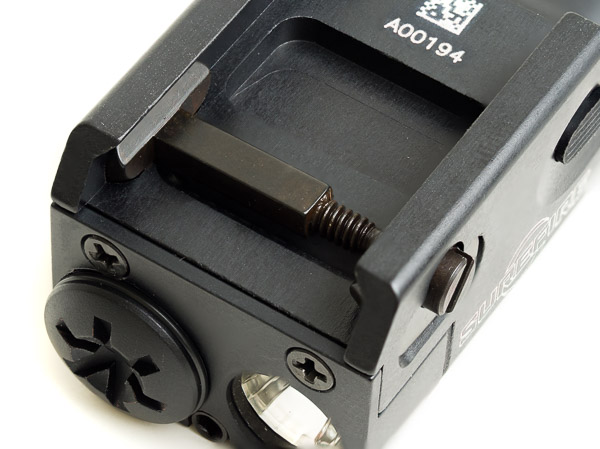 A Glock 19 with the XC1 handle almost like a Glock 19 without any light attached to it. The XC1 is hardly noticeable, unlike with an X300 where you know there is some weight near the muzzle of the pistol. 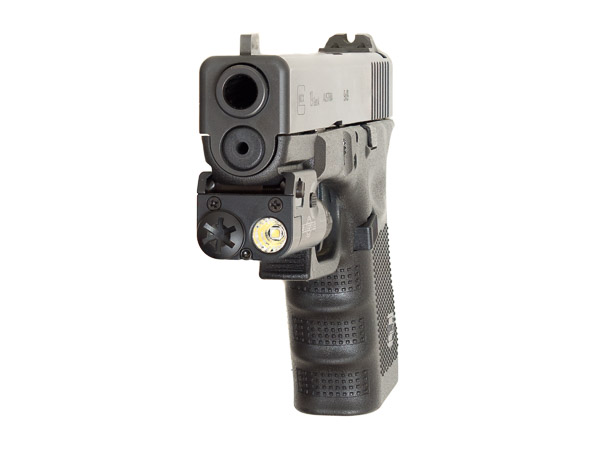 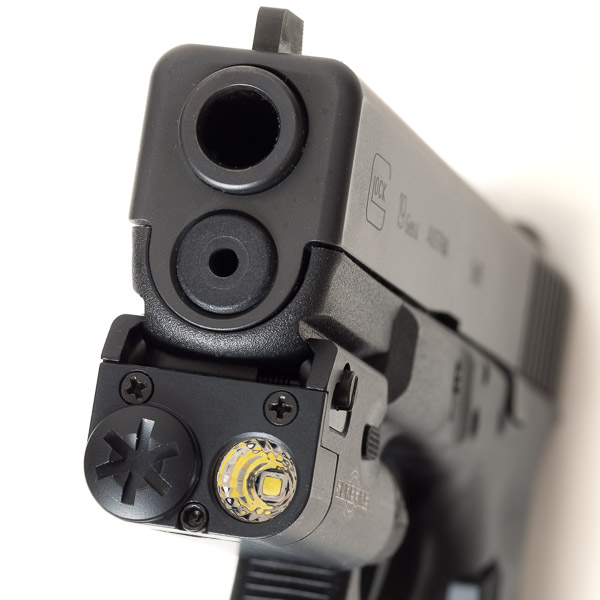 As far as the beam output of the XC1, it is not tightly focused like the X300 or X300 Ultra. But the beam gives a nice even illumination near the center with a gradual and consistent fall off of light from center. 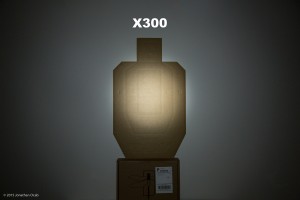 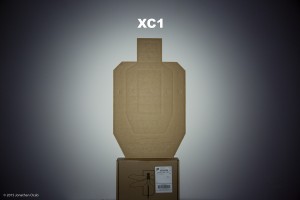 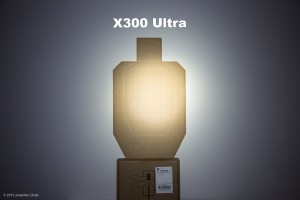 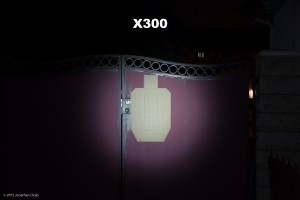 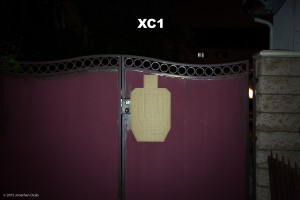 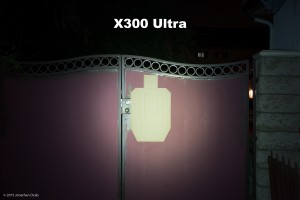 The camera was set to manual and locked in for the same aperture, shutter, and ISO for all three beam samples in order to keep them even. But I took liberties in adjusting temperature to get the beams looking like what I perceive them to be in real life, and I also bumped up the exposure slightly on the X300 sample photo to make it more reflective of real life.

The farther distance helps show the distinct shape of light projected by the XC1 versus the X300 series.

But the XC1’s 200 lumens are shaped in a wider pattern that the X300 series giving a sizable cone of light on target. 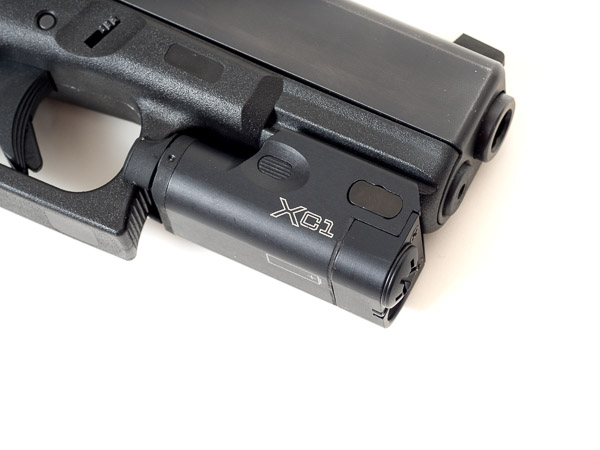 I mentioned at the beginning  that I pre-ordered the SureFire XC1 via a combo promotional with a Raven Concealment Systems Phantom LC (Light Compatible) holster. I have been using RCS Phantom LC holsters for the past few years now. These are excellent outside-the-waistband (OWB) holsters and I have already written a review of my first Phantom LC (for a Glock 17 with a SureFire X300).

This is due to the fact that there’s less of a light to mold around. Since the X300/X300U have large battery compartments that make the light body wider than the gun, the holster needs to accommodate this. 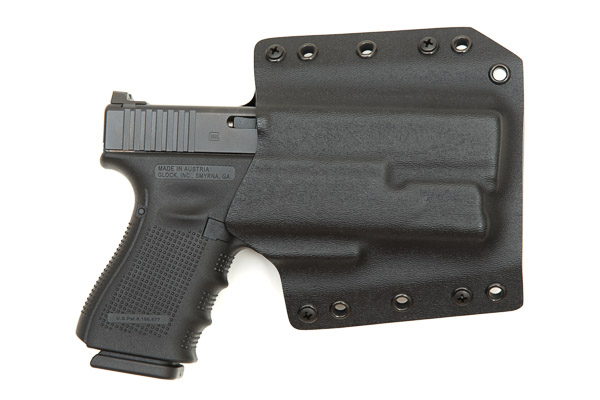 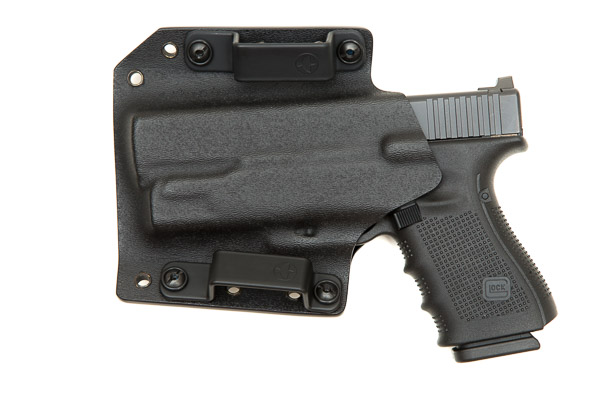 I also acquired the Haley Strategic Partners INCOG Shadow for the G19+XC1 which is an inside-the-waistband (IWB) holster. I actually already own the INCOG and INCOG Eclipse, but these are holsters that take pistols without attached lights.

Just a little background on the HSP/C-Gode INCOG since I don’t have a write-up on these holsters.

The INCOG series of holsters are a happy medium between some of the more traditional IWB holsters such as the Crossbreed which is a hybrid of Kydex and leather, using a larger leather backer inbetween the body and the gun, and the minimalist IWB holsters like the Raven Concealment Systems Vanguard which is a simple polymer enclosure for the trigger and a belt clip attached (and no holster material around the rest of the gun).

The INCOG series of holsters are Kydex with a “Tactical Fuzz” outer coating (or a camouflage coating). From the Edge Works / G-Code FAQ:

Tactical Fuzz is a “suede like” synthetic outer laminate. This outer layer presents a softer surface that significantly reduces noise during movement, lowers the rigs reflective signature in the IR spectrum and blends with the surrounding environment. “Tactical Fuzz” has a near 0% water absorption rate and is permanently bonded to the holsters outer surface. Tactical Fuzz is an available upgrade on ALL G-Code holsters (except for the SOC Rig) and magazine carriers as well as select G-Code accessories.

I am actually a fan of the INCOG for IWB, particularly appendix carry. Appendix carry is becoming more accepted, although it still has a lot of detractors. I used to prefer IWB at the 4 o’clock or 5 o’clock position, but appendix carry (anywhere from 1 o’clock to 2 o’clock depending on attire) gives faster draw and it does make the operator more attentive of the gun being carried.

Appendix carry IWB can be tough. It’s definitely not for tucked in shirts unless you’re wearing outerwear (e.g. suit jacket, sweatshirt, etc). Even with an untucked t-shirt, printing could be a problem.

That being said, the INCOG Shadow I purchased came with the “mag caddy” installed.

Not that you can covert a two-clip INCOG to a single clip using the Super MOJO clip sold by HSP/G-Code. Two clips will give more stability, but a single clip is easier to run on the belt, and in the case of smaller pistols like a Glock 26, a single clip is more than enough to hold the gun in a stable manner. 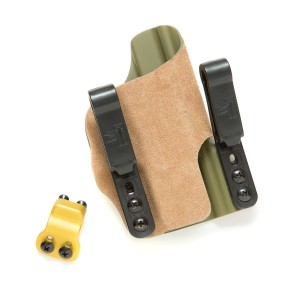 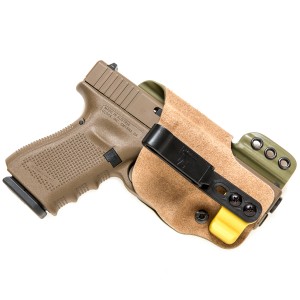 As far as the INCOG Shadow for the G19+XC1, it is a bit beefy with the mag caddy. This is going to be a YMMV (Your Mileage May Vary) situation with regards to whether or not you can run the INCOG Shadow with mag caddy for a G19+XC1.

But the Raven Concealment Systems Phantom LC and the Haley Strategic Partners / G-Code INCOG Shadow are the very first holsters available for a Glock 19 and SureFire XC1, which is most likely going to be the most common pairing for the XC1. Which holster would I recommend? They are both solid holsters, but for different carry styles.

It all depends on how you want to carry and how you dress (jacket or no jacket, etc). OWB is going to be the most comfortable for everyone, hands down. But IWB with appendix carry is arguably one of the most expedient concealed carry methods available. Either way, you’re going to get a quality holster.

Now as far as recommending the SureFire XC1, I give it a solid ‘yes’ for anyone how wants a smaller form factor light for their Glock 19 or other compact pistol with an accessory rail.

The 200 lumen power output is more than enough for a pistol platform and the use of a AAA battery means lower maintenance since it is not reliant on the more expensive 123A batteries.

The one negative aspect of the XC1 is the fact that you need a screw driver to install it on a Glock. I would have preferred a U/P latch on the XC1 for hand installation/removal. But I surmise SureFire wanted to keep this light more universal to all types of pistol attachment rails and having an interchangeable latch mechanism most likely would not have fit the small form factor of the XC1. 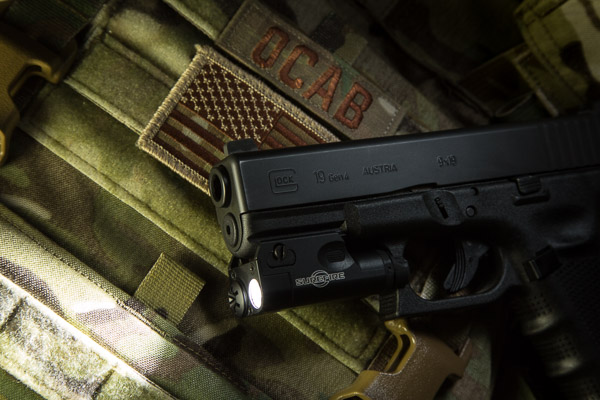 The decision on which to get is up to the user and the intended application.

But it looks like SureFire has done it once again with the XC1 pistol light. Of course, if you want one right now (October 2015), they are still in short supply at retailers. Just stay on the look out and you should be able to score one in the next month or so.